As everybody knows, the people from Bilbao are born wherever they want. And, according to one of the most captivating conjectures in contemporary archaeology, this might have been so in a totally unexpected way even from many millennia ago. The conjecture I am referring to is the ‘Solutrean hypothesis’ about the first human population of the Americas, the claim that the authors of the so-called ‘Clovis culture’ (around 11.000 years B.C., a name derived from an archaeological site in New Mexico), or more specifically, their ancestors from a few thousands of years before the dispersion of that culture through most of North America, had not come from the north-west (i.e., crossing Alaska from Siberia), but from the east, navigating the Atlantic Ocean in the epoch known in European archaeology as the Solutrean period (around 22.000-15.000 B.C.), which coincided with the maximum extent of the last glaciation. Though the hypothesis of a European origin of American population had been suggested from time to time by some specialists, beginning in the late 19th century, the last and most sophisticated elaboration and defence of this conjecture has been presented by the archaeologists Dennis Stanford of the Smithsonian Institution and Bruce Bradley of the University of Exeter since the last years of the 20th century, and they have made a meticulous collection of the reasons in favour of the conjecture in their recent book Across Atlantic Ice (2012).

The main argument in favour of a European origin of the Clovis culture is the striking similarity between their respective types of stone tools. The thin bifacial points typical of Clovis, as well as other less common tools of the same sites, are not only very similar to the analogous weapons found in Southern France and Northern Spain from the Solutrean period, and not as similar in shape or sophistication to anything recovered from the same epoch in northwestern Asia or even Alaska, but the technology needed to produce Clovis tools is even more similar to Solutrean technics than to the contemporary Siberian or Beringian ones. Bradley and Stanford present both a statistical cluster analysis of the similarities in shapes between Clovis-Solutrean, on the one hand, and Clovis-Beringian, on the other hand, as well as a dynamic system analysis of the processes needed to transform a brute stone into a nice and elegant fluted point, and show that the connection is much stronger in the first case than in the second. This simply means that the number of transformations in the construction technique that was needed for a stone-tool maker to pass from elaborating the typical Beringian tools to producing Clovis points is much larger than the changes needed from moving Solutrean to Clovis technologies. It is as if we had some few recordings of sambas, rock&roll and blues, and where trying to discover which of them had evolved from which: the number of modifications from blues to rock is much smaller than the one needed to transform a samba into a rock, and hence it is very likely that rock has evolved from blues, not from samba.

This, of course, is not a categorical proof. The Clovis people might have made an ‘independent discovery’ of the Solutrean technology though the typical evolution in stone tools gives few examples of such convergence during the Paleolithic. Bradley and Stanford make fun about this situation by telling that nobody would express the tiniest doubt about Solutrean tools being the direct ancestor of Clovis points if the former had been discovered in Siberia instead of near the Bay of Biscay. But, since technological convergence is a possibility, other arguments are needed to support the Biscay connection. One is the fact that the chronology of Clovis related sites seems to point in the contrary direction as the one suggested by the Siberian-origin hypothesis: the most ancient findings of Clovis technology are to the southeast of North America, whereas the closer to Alaska a Clovis archaeological site is, the more modern it seems to be. This, of course, is also not a categorical proof, for the remains are so few that the apparent displacement of the technology in the north-east direction may be just an artefact of our poor archaeological register. In fact, Alaska and north-western Canada (as well as the Asian part of Beringia) are so scarcely populated that archaeological research and findings are just much scarce there than in the East or Mid-West of the United States.

A third argument, not directly in support of the Solutrean connection, but which undermines the Beringian alternative, is the recent finding of proofs of human settlement in the New World, and in particular in the east coast of North America, long before the most ancient remains of Clovis tools (i.e., around 11.000 B.C.). The two most important findings are Meadowcroft Rockshelter (in Pennsylvania), a site with human occupation dating from around 16.000 B.C. (and perhaps even 19.000 B.C), and Cactus Hill (Virginia), from around 15.000 B.C. (and according to some measures, even 22.000 B.C.). The flints found in these sites might be classified as of an intermediate style between Solutrean and Clovis. Even if they were not of Solutrean origin, the existence of these sites (as well as other findings in both Americas dating from about the same time, and perhaps even earlier, including some human coprolites from Paisley Caves, Oregon, that have inspired a memorable sonnet) would be incompatible with the most popular theory about the origin of the Clovis culture directly coming from Beringia, for the passage between the glacial masses that conjecturally would have allowed the trip of the Syberians into Alaska and Canada would only have been open at about 12.000 B.C.

A still more disturbing finding was made in Eppes Island (also in Virginia) back in the 70’s, during the excavation of some of the first modern European settlements of North America: a flint biface easily recognisable as a Solutrean ‘laurel leaf’, whose geochemical analysis proved that it was made out of a stone extracted from the geological formation of Grand Pressigny, in France! However, the fact that no other paleolithic remains were found in the site, and the possibility that the modern European settlers of the area in the 17th and 18th centuries might be of French origin, does not allow to discard that the biface was actually found in France in modern times (but long before anything about the European ‘man of the caves’ were known) and taken to America afterwards on modern ships.

But, of course, in spite of all this evidence, the fact still remains that there are no direct proofs of the Franco-Cantabrian hunter-gatherers having crossed the Atlantic Ocean by the time the Solutrean conjecture needs. Is that even a physical possibility? Though paleolithic long distance sea travel had been considered absurd in the past, now it is accepted that some trips of dozens or a few hundreds of kilometres through open sea have been made during the stone age (e.g., to some Mediterranean islands, and most importantly, to Australia and New Guinea). The technological sophistication of the first painters of Altamira must not have been too much lower than that of modern age inuits, for example, and, though we have no consistent set of remains from the Solutrean age proving that those people dominated an open sea environment, it is also true that the coastal settlements of the time are now more than 100 meters under the sea level due to the defrosting of the glacial masses, at either side of the Atlantic. Bradley and Stanford suggest that around 20.000-15.000 years B.C., the limit of the north Atlantic sea ice would be at around the latitude of the British Isles, and this could have provided a semi-permanent platform connecting both continents, and in which, people equipped with boats may have travelled hunting seals and other sea animals. It is not necessary that a constant movement of human masses has existed between, say, the Bay of Biscay and Pennsylvania, but only that, from time to time, some small groups of trainera sailors, adventuring further than usual, have reached America and settled there bringing with them their own culture. 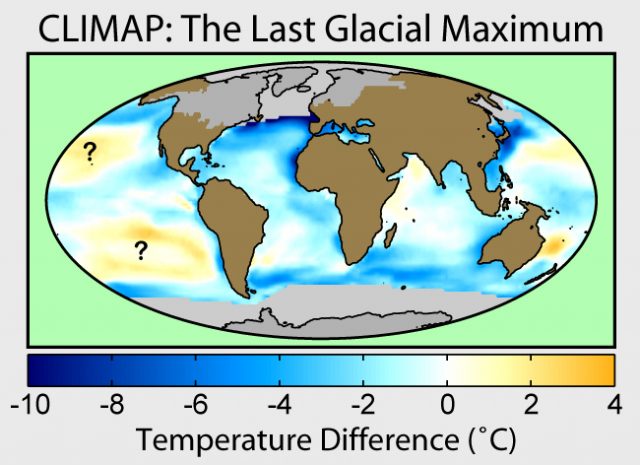 Be this as it may, the most important argument against the Solutrean hypothesis does not directly come from archaeology but from genetics. It seems that the genomes of the present native Americans are clearly of Asian origin, rather than European (though the lineages are far from offering a clear picture, and some mitochondrial DNA from north-west American natives seems not to be of eastern Asian origin, but more closely related to European or Iranian genomes). Unfortunately, there is basically no human remains in America dating from before 10.000 B.C (i.e., after the end of the Clovis culture), only one solitary infant skull, and the coprolites mentioned above, which also seem to point to an Asian origin more probably, though not definitely. But it is curious that there are almost no human Solutrean remains in Europe as well (whereas we have relatively many human bones from the Aurignacian and Magdalenian times, the periods immediately before and after the Solutrean). It seems that the people inhabiting Spain and France at around 22.000 to 15.000 B.C., as well as the Clovis people and their immediate ancestors, had a culture that made them dispose of the remains of their relatives in some way that no single bone of them is preserved. Perhaps they burned them or leave them to the wild beast. It is, in any case, another striking similarity at both sides of the Ocean. There is also the possibility that the authors of the Clovis culture were not the ancestors of more modern American natives but were displaced by people crossing Beringia some thousands of years after the former reached the New World. But of course, the absence of evidence is not evidence of anything.

In conclusion, it is not clear at all whether the Solutrean conjecture about the origin of the Clovis culture is right or wrong, but if it is true, it would be a profound irony of history that the name of the first known tool makers of America derives from that of the first king of the Franks: Chlodovechus. Though, of course, perhaps ‘Koldo culture’ would have still been a more appropriate name.

Stanford, D. J., and B. A. Bradley, (2012), Across Atlantic Ice: The Origin of America’s Clovis Culture, University of California Press.