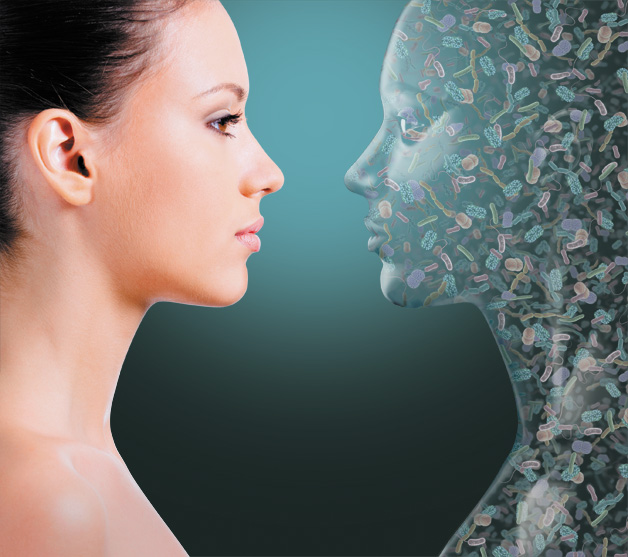 Over the last years, we have found out more and more about the vast amount of bacteria that live with and in us. These populations have been shown to play an important role in our health and are associated with diseases ranging from metabolic disorders such as obesity to autoimmune diseases or cancer. But do they also interfere with our aging process? And if so, can we modify them to our benefit?

Inflammation is a protective response of the body to injury in order to eliminate its cause and promote tissue reparation. The mediators involved in this process are cytokines and soluble mediators, among others. This is a tightly regulated process, designed to control, eliminate and revert damage caused by infections or other injuries. If this precise system becomes unbalanced, the consequences can be significant for our health. In the process of aging, the levels of inflammatory mediators circulating through our body increase. This state is generally known as low-grade inflammation or age-related inflammation. In normal conditions, the inflammation process is activated to defend the body against pathogens. However, during aged-associated inflammation, the system becomes deregulated and it even decreases the ability of our body to defend itself against pathogens. Interleukin 6 (IL-6) and tumor necrosis factor (TNF) are two of the most significant markers linked with age-associated inflammation and even with mortality. Although this inflammation state has a huge impact on our aging course, the causes remain still elusive.

Recently, Thevaranjan et al suggested 1 that microbes living in our guts, the microbiota, are involved in our aging process. In their study, they found higher levels of a component of the bacterial cell wall (muramyl dipeptide [MDP]) in the plasma of older mice, indicating that the gut turns leaky with the age. Bacterial products enter the bloodstream leading to an increase of inflammation mediators such as IL-6. Older mice failed to kill and eliminate infective bacteria such as Streptococcus pneumoniae, the major cause of pneumonia. This suggests that macrophages, the cells in charge of detect, kill and engulf pathogens, become less efficient in old individuals. This shrank in macrophage activity is due to higher levels of TNF found in older individuals, which is one of the age-related inflammation markers.

Interestingly, they also showed that the microbiota actually gets older together with their individual host. In line with other reports, they found that the bacterial populations in young and old individuals were clearly different. In the elderly, for instance, we can find decreased amount of bifidobacteria and increased of Clostridium.

This study used mice, which is frequently employed as an animal model because their microbiota is easy to manipulate and adjust to controlled parameters. Mice can be raised in germ-free environments, sterile conditions with no exposure to microbes. These are the so-called germ-free mice that can subsequently be colonized with a controlled population of microbes to study their effect on the host.

Surprisingly, the researchers found that the relation of altered old microbiota contributing to aging process works in both ways. Using mice genetically modified to not express TNF, (TNF KO mice); they proved that the microbiota of old and young mice were less divergent in mice that cannot produce TNF than in normal, TNF-producer mice. Furthermore, they treated normal mice, young and old, with a drug able to reduce TNF levels. They saw that reducing the levels of TNF changed the composition of the microbiota in old mice but not in the young ones. This shows that TNF has a direct effect on microbiota aging. That is to say, the aging processes of the body make the microbiota become older and reducing the body inflammation level can modify and even rejuvenate microbiota (with benefits for the host).

In conclusion, the researchers have shown that there is a direct relation between getting old and the base level of inflammation of the body. Furthermore, this level of inflammation is related to the microbiota living in the gut of the host. But it works both ways. Individual body and microbiota grow old together, the old bacterial population make their host get older, and the aging processes of the host also contribute to microbial imbalance.

With this is mind you might be thinking that if we can change our microbiome by a younger one, we can improve our health and even decrease the side-effects of the aging process. The good news is that data suggest that you might be right! At least to some extent because the microbiota in the elderly seems to be very influenced by alimentation. Studies indicate that supplementing bacteria more common in “young” microbiota, improved the immune function, especially in people of 70 years old and older. Unfortunately, we do not know yet which bacteria are responsible for our aging; aging could be due to a type of bacteria, or even a shift in their metabolism. We need to keep on investigating the fascinating world in ourselves; the secret of eternal youth might be in us!

Regain the renewal capacity after myocardial ischemia? Pitx2 and its partners!