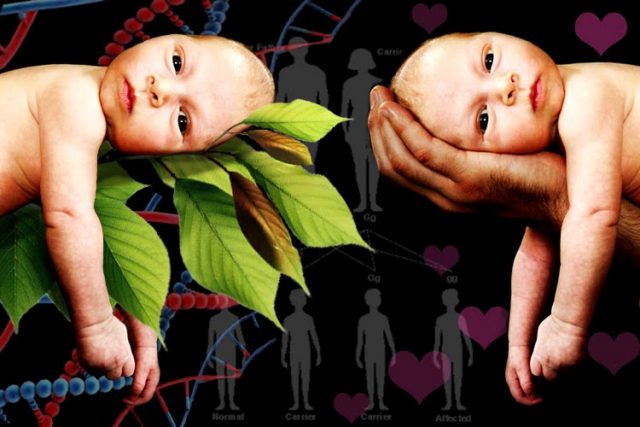 This article summarizes a review of the literature presented in Sacerdote (2011) 1. I thank Ricardo Mora for bringing it to my attention.

The simplest model of behavioral genetics assumes that child outcomes (Y) are produced by a linear and additive combination of genetic inputs (G), shared environment (F) and unexplained factors (S). For instance, if Y is years of education, the model can be expressed as

where G, F and S are the number of years of education explained by genetic factors, environment and non explained, respectively.

Many studies would be necessary to show exactly which genetic and environmental factors are behind this relation. While this is done, we can learn a great deal about the importance of the three factors. If in addition we assume that G, F and S are uncorrelated, and take the variance on both sides of the equation we get:

Dividing both sides by Var(Y) gives:

where g are f are the part of the variance in years of study explained by genetic and environmental factors, respectively, while s is the variance that remains unexplained.

Now, if we measure Y, G, F and S in the appropriate units (substract the mean and divide by the variance), standard statistics show that the correlation in outcomes between two adoptive siblings equals:

while the correlation between two non-adoptive siblings equals

By studying correlations between adoptive and non-adoptive siblings we can find the values for g, f and s. For instance, if the correlations are 0.1 and 0.35, respectively, we have that f = 0.1 and g = 0.5. If this is the case we say that the genetic factor explains 50% of the differences in Y in a population, while the environmental factor explains just 10%, leaving an unexplained 40%. A similar analysis can be done for fraternal and identical twins.

There are four meta-studies on the literature that measures the contributions of genes and family environment to IQ: Goldberger (1977) 2, Bouchard and McGue (1981) 3, Devlin et al. (1994) 4 and Taylor (1980) 5. The variance attributed to genetic factors ranges between 32% and 60% (with the average around 50%), while the common environment explains anything between 4% and 29% (averaging 15%). Four studies, conducted mainly by sociologists and economists, use the behavioral genetics model to analyze the variance in years of education: Behrman and Taubman (1989) 6, Scarr and Weinberg (1994) 7, Teasdale and Owen (1984) 8 and Behrman et al. (1977) 9. The genetic factors explain between 36% and 88% (average around 60%) of the variance, while the common environment explains between 5% and 41% (average around 20%). Studies on earnings and personality traits show similar differences between genetic and environmental explanations, although at a lower level.

These findings are, however, at odds with the fact that the environment seems to matter, as found in the studies of the effects of school assignment made by Hoxby and Murarka (2007) 10, Evans and Schwab (1995) 11 and Neal (1997) 12. One could try to reconcile these data with the above model in different ways: may be the effect is working through the 15-20% role of the environment or may be the behavioral geneticists are working within a restricted range of environments observed in a few societies. Also, the underlying model may be excessively simple. The influence of the different factors may not be additive or linear, or maybe correlations among them are not zero, and not taking into account these possibilities perhaps underestimates the environmental factor or overestimates the genetic one. In fact Dickens and Flynn (2001) 13 present a model in which environment responds endogenously to genetic endowments and finds different estimates. Björklund et al. (2005) 14 allow for different shared environment correlations among identical twins relative to fraternal twins and shows that the heritability effect falls significantly. Ridley (2003) 15 and Turkheimer et al. (2003) 16 also show how nonlinearities indeed may cause the model to overstate the genetic factor.

There is a long way to go from the observation that genetics matter to the variance decomposition, the causal effects for interventions outside the range, and to make predictions about policy changes. A sight problem may have a 100% genetic component but glasses can be useful.

where Ei and EMi are adoptive child’s and adoptive (or biological) mother’s education respectively and Xi could be a vector of controls for child gender or age. Coefficient d captures the degree to which additional years of education for the mother are transmitted to the child.

Björklund et al. (2006) 17 uses the census of all Swedish adoptees who were born during 1962-1966 and a 20% sample of non-adoptees born during the same time period, and estimates transmission coefficients from adoptive and biological parents to adoptees and non-adoptees. The outcomes considered are years of schooling, completion of university education, annual earnings, and annual income.

For the non-adoptees we see transmission coefficients of earnings in the range of 0.24, similar to other estimations one finds in the literature. The transmission for education is also 0.24 and is also similar to those found in other studies. No difference is found between using the father’s education or the mother’s.

Studies like this may reconcile the mounting evidence that biology matters a lot with the no lesser evidence that differences in school quality and home environment are also important, and may also provide the basis for effective policies towards social inequalities.

The ongoing debate about the foundations of quantum mechanics