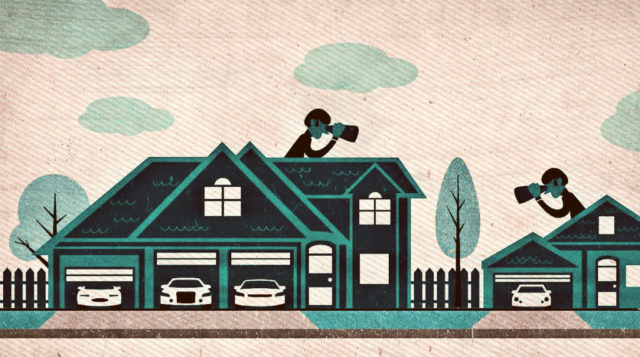 Given the choice between €500 and a chance to win either €0 or €1000 with equal probabilities, most people opt for the sure prize of €500, even if the expected amount of money is the same in both cases. In both Economics and Decision Theory, this risk-aversion is usually modeled by considering, not the amount of money directly, but the utility derived from it. Say that an individual prefers anything above €300 rather than the lottery, but prefers the lottery to any payoff below €300 (and then, that she is indifferent between €300 and the lottery). If we assign the utility index of 0 to the payoff €0 and the index of 1 to the payoff €1000, then the expected utility of the lottery is (0+1)/2 = 0.5. If €300 is as satisfactory as the lottery, the utility index of 300 must be 0.5 as well. If another individual is less risk averse and has €400 as the payoff equivalent to the lottery, her 0.5 index will be assigned to €400.

This theory has been proved very useful to study many economic problems, like the consequences for efficiency of having asymmetric information in the markets (when buyers and sellers know different things related the good or service provided). However, there are still many situations in which the theory is not validated by the data. For instance, many individuals buy insurance to avoid a risk and, at the same time, voluntarily enter in a risky situation when they buy a lottery ticket. Also, it is well documented that people tend to overestimate or underestimate certain risks. These behaviors cannot be accommodated by the expected utility theory, and some alternatives have been proposed instead, like rank-dependent utility models or prospect theory.

Rank-dependent utility modifies the objective probabilities in an attempt to reflect the individual’s perception of them. Prospect theory defines the utility indices depending on the status quo: when leading with loses, and individual may show a risk taking behavior, while at the same time she may show a risk averse attitude when facing prospect gains. The cumulative prospect theory combines elements of these two alternative theories.

In a recent paper, Müller and Rao (2019) 1 explore social preferences in the form of inequality aversion, and their relation with the risk attitudes we just described. The inequality aversion can be illustrated with the “keeping up with the Joneses effect,” whereby an individual’s satisfaction depends not only on their absolute level of consumption, but also on their relative position within their social community. There are models for each type of behavior pertaining risk and inequality, but the combination of both seems to have eluded researchers in this field. The authors propose to combine two prominent behavioral models: the model of constant relative risk aversion and the Fehr and Schmidt (1999) 2 model of inequality aversion. When they develop the model, they find a relation between risk and social preferences that can be illustrated as follows:

“Think of a neighbor who dislikes driving a car that is smaller than yours. Consequently, he may start to redeploy his private savings toward riskier assets or he redirects to an uncertain but promising career-track to catch up with you… On the other hand, to avoid isolation and envy most people try not to be too far ahead in income comparisons within their social community. This might induce a higher degree of conservatism than without social peers. These examples illustrate that risk-taking behavior is affected by the social context. The magnitude of this impact is likely to depend on individuals’ sensitivity to social comparison.”

After the theoretical results, the authors perform a lab experiment to test the predictions of the model, namely, that individuals tend to be more risk averse when they see themselves below their social peers, and make decisions to try to keep up with them, and that they tend to be more risk averse when they are above them. The experiment has several parts, in which the authors (i) measure subjects’ risk preferences, (ii) elicit social preferences, and (iii) test their risk-taking behavior under disadvantageous and advantageous inequality. To avoid carry-over effects from one test to the next, the authors conduct the different parts of the experiment in different orders in separate groups of experimental subjects.

To elicit risk preferences individuals are randomly paired with a partner and each one of them simultaneously chooses their preferred lottery among many, in a fashion similar to the comparisons in the introductory example of this article. In order not to have influence by inequality preferences, at the end of the experiment the computer will randomly select the choices of one of the players, and both players will receive the payoff after that player’s selected lottery is played. Since both players get the same amount, social preferences play no role.

To elicit subject’s aversion to unfavorable inequality they conduct a version of the ultimatum game. The game is played between two players, the proposer and the receiver. They must decide how to divide an amount of money, say €19, in the following way: first, the proposer makes an offer (e.g., 12 for herself and 7 for the other player), then the recipient has to accept or reject the offer. If accepted, the division in the offer is carried out; if rejected, they both get nothing. In the authors’ version, all subjects simultaneously have to decide how much of €19 they are willing to offer to the recipient. Afterwards, all subjects simultaneously make decisions in the role of recipients, where they have to indicate which minimum offer they would accept. Subjects know that after the experiment is finished, the computer will randomly pair two players and determine a subject’s role (proposer or recipient) and the payoff of the relevant decision according to their declared choices. The parameter showing the degree of aversion towards inequality when they are below their peers can be calculated after their decisions made in the role of the recipient. Just write the equality between the utility of the choices that are indifferent for the individual. Since the utilities depend on the parameter, it can be obtained by solving the equation.

To elicit subject’s aversion to favorable inequality the conduct a version of the dictator game, where the proposers’ offer to divide the money is automatically carried out, and the recipient cannot reject it. In the author’s version, the proponent has to decide between keeping €19 for herself or any of the equal splits from (€1, €1) to (€20, €20). Say an individual prefers (€19, €1) to all equal splits up to (€13, €13), but prefers equal split (€14, €14) and all above up to (€20, €20) rather than (€19, €1). With this information, one can again calculate the proposer’s degree of aversion towards inequality when they are above their peers.

In a last experiment, subjects are asked to make decisions in a context where both risk and social inequality attitudes are relevant. Given the preferences elicited in the previous experiments, the theory has two predictions illustrated in the quote above. The experiments validate the theory. Finally, the authors also show that the data do not support the alternative models of rank-dependent utility and cumulative prospect theory.

Why the Soviet Union could not be reformed