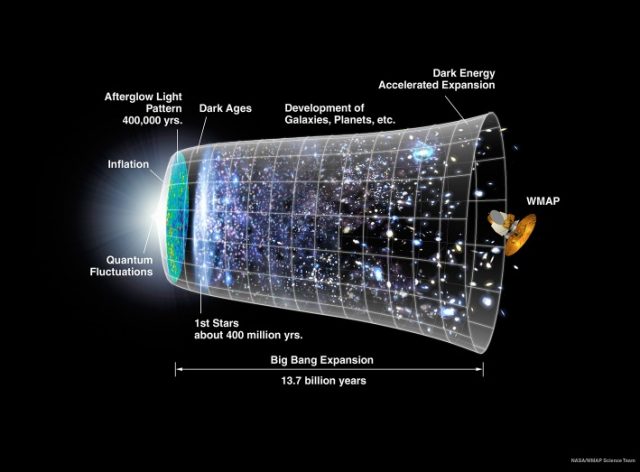 In the last days there has been an important breakthrough in physics and particularly in cosmology due to the publication of the results of the BICEP2 collaboration on the measure of certain polarization of the Cosmic Microwave Background (CMB) we refer to as B-modes. These modes are thought to be sensible to the density of gravitational waves in the very first moments of existence of our universe and therefore they carry information about what happened in that time and, specially, they have information about how the Universe expanded in an exponential way just after its creation, a phenomenon named Inflation.

A lot of webpages have referred to this incredible success in the field of cosmology and almost all of them have discussed about the inflationary models proposed by Alan Guth and Andrei Linde around 1981. However, none or very few of them have referred or talked about the real father of the inflationary model for our Universe, a russian physicist named Alexei Starobinsky. This short post is my personal tribute to this man. But first, let us go to the end of the 70’s…

The decade of 1960 was the decade of Quantum Field Theory and Particle Physics, with the completion of what we can already start calling the Standard Model of Particle Physics and the discovery of the first flavours of quarks. A lot of people thought then that the 70’s were going to be the decade of gravitation because of two main reasons. First, physicists like Bryce De Witt or Martinus Veltman (advisor of a young Gerard t’ Hooft in that moment) were starting to understand how we should look at quantum physics when gravity was present and, secondly, the discovery of the CMB was causing a revolution in cosmology and people was optimistic about how much information we could extract from this primordial picture of the Universe. However, this data coming from microwave radiation posed an important problem for cosmologists.

If they accepted the Friedman-Lemâitre-Robertson-Walker model as the model describing the evolution of our universe, then it was impossible to understand why the cosmic microwave background was so uniform. The data was saying the all the universe had basically the same temperature, with the only fluctuations present there being of 10^-5 K, something impossible because FLRW model predicted that some of the regions in the universe never touched themselves so they could never achieve thermal equilibrium.

Therefore, at the end of the 70’s it was clear that something had to have happened in the primordial universe that explained not only this homogeneity in the temperature of the universe but also some other minor problems like why our universe is so flat (in the geometric sense of General Relativity) or why we do not observe cosmic strings and other exotic kind of “particles”. Thus, physicists arrived to the conclusion that the Universe should have go through a short epoch, just after its creation, in which it expanded so much fast than now, exponentially actually. This inflationary epoch would allow two regions that now appear to not to be causally connected to be it in the past and also solves all the other problems that cosmologists were finding at the moment. However, a big question arises here: What kind of physical mechanism made this inflationary epoch to happen? The first one to answer this question was Starobinsky1, and he did it in a very ingenious way, relating this cosmological issue to the other hot topic of the 70’s, the quantization of Gravity.

Few years before, M. Veltmann and G. t’ Hooft found2 that, even if we do not know how to construct a quantum theory of gravity, we still can compute the backreaction of General Relativity to the presence of Quantum Fields. In other words, Einstein’s theory relates the curvature of spacetime to the matter content of the universe and, what the two dutch physicists found is that if this matter is quantum (i. e. It is described by a quantum theory), then Einstein’s equations have to be corrected in a particular way, adding higher contributions depending on the curvature of the spacetime that are then relevant only when this is high. In any other situation, these contributions are little and one effectively has just plain General Relativity without modifications.

Starobinsky then put this all together: General Relativity has to be corrected in the presence of quantum matter, these corrections are important when the space is very curved, the space at the first moments of the history of the universe had a very large curvature… then this higher curvature corrections had to be relevant in the beginning of the universe! So he examined what was the effect of this modifications in cosmology and he found that, as expected, the universe obtained in this new setting was identical to the FLRW model except that it went through a short epoch in which it expanded exponentially. Starobinsky had found a possible mechanism for inflation!

Why is this Starobinsky inflationary model not very famous nowadays then? There are some reasons that arise if one pays attention to the history of physics during the 80’s. First, people do not like (and I must say that I do not understand the reason) to work with the quantum effects in gravitation found by Veltman and ‘t Hooft without knowing how the complete theory of quantum gravity is. But the most important reason is that it can be shown that these modifications to Einstein’s equations can always be seen as the contribution of extra matter, thus having plain unmodified General Relativity but with the addition of some new field, as Brans and Dicke showed3. Any curvature correction can be rewritten as the contribution of a new field.

Then, and since some argue that the correction to Einstein’s equations coming from the real theory of quantum gravity could be slightly different to that computed by Veltman and ‘t Hooft, people prefer to work by considering the extra matter instead of with curvature corrections. Also, working this way allows to consider both the option of quantum gravitational corrections and the option that the physical field mediating inflation could be a real field, not coming from this redefinition we have talked about. And, being sincere, since no one understands really what quantum gravity means, the majority of the scientific community prefer to avoid the topic and thus work with models not related to it if when possible.

The true mechanism of inflation and the real nature of the Big Bang are still open questions in frontier physics and we will have to wait to the data coming from the Planck satellite first and from future experiments later in order to have more clues that confirm or deny all the possible different inflationary scenarios that have been proposed. However, we are sure about one thing: inflation happened, and the first one to construct a plausible model was not Guth or Linde, it was a forgotten russian physicists named Alexei Starobinsky.

The search for cosmic inflation

The light that remains: the cosmic infrared background unveiled