The Big Bang Theory is one of the most robust theories ever made, if not the most. It also has become one of the greatest shows of our time, and I am not talking about the TV show with the same name -which is also one of the greatest TV shows of our time, just saying. I am talking about the little big drama that is taking place this year around the last piece of the Big Bang to be found: Inflation.

To understand what is this fancy-named physical concept I will need to use another fancy-named physical concept: a causality bubble. At first, there was nothing. Then somehow the Big Bang happened, and a lot of matter was created, along with space and time. And right after that, the instantly born universe began expanding as you may have heard. The universe was really dense, and light kept bouncing from atom to atom, without a chance of covering big distances in a straight line. The expansion made the universe less and less dense, and at some point (roughly at year 380,000 after big bang) the universe became transparent to light as it is today (you can see galaxies at the edge of the universe, so yes, now it is transparent). All the light contained in the universe bouncing from atom to atom became free to travel in any direction at more or less year 380,000. This light is what the physicists call the Cosmic Microwave Background (CMB), some sort of static noise coming from every direction, and is still detectable today. The beauty of it lies in the small anisotropies of the CMB. A region with more matter than the average should yield a slightly energetic light than the average, and another region with few matter than the average should yield a little less energetic light. One can see the matter distribution of the universe at year 380,000 just by measuring the energy of the CMB around the whole sky. The CMB is the greatest archaeological finding ever made!

And then the problems began. As you can see in the images there are some big spots in the CMB, meaning that all the matter there was somehow correlated, with the same temperature and density. The problem lies in the speed of light. If this is a picture of the universe at age 380,000, no correlation can exist at distances greater than 380,000 light years. Theoretically there cannot be spots in the CMB bigger than 380,000 light years. This is the concept of causality bubble; there is no causal connection between points separated more than 380,000 light years. But there are some spots bigger than that, so correlation at bigger distances is a fact. We have a problem there. Is the speed of light not a natural limit? The physicists prefer to contemplate a new era of the universe: the Inflationary stage, which would have taken place right after the big bang.

At this stage the universe expanded faster than the speed of light. Matter correlated earlier than this inflationary stage, then the inflation happened, the universe expanded faster than light, and now causally disconnected matter share that correlation. At the moment of writing this, the inflationary stage is still unconfirmed, but it is also the center of a big debate. Such a fast expansion should have generated really big gravitational waves, and those waves would have polarized the CMB light in a similar way as a polarized pair of glasses. The pattern of polarization generated by the hypothetical inflationary stage is called B-mode. So there is a big international effort in detecting those B-modes. The main actors of this play are the BICEP2 telescope, located in Antarctica, and the Planck telescope, located 1.5 millions of km above us, in space. Both telescopes are measuring the B-modes of the CMB.

It all began in March this year 1. BICEP2 called the press and announced the detection of those B-modes, making a big impact in the community. They even recorded a video of a student going to the house of Andrei Linde (one of the creators of the inflationary theory) and telling him that he was right, that the inflation really happened. They opened a bottle of champagne and cheered together. That was before the paper with the experimental results was even published. In June they were proven potentially wrong. They were looking at the CMB in a region with interstellar dust. This dust was not correctly modeled and soon a paper also from BICEP2 stated that “…these models are not sufficiently constrained by external public data to exclude the possibility of dust emission bright enough to explain the entire excess signal” 2. Big Bang for you, BICEP2. So then the focus pointed to this interstellar dust. Its emission had to be measured in order to see if BICEP2 results were true or not. Do you know who can measure this dust emission and solve this riddle? Yes, the Planck Telescope, the rival runner in the inflationary race. 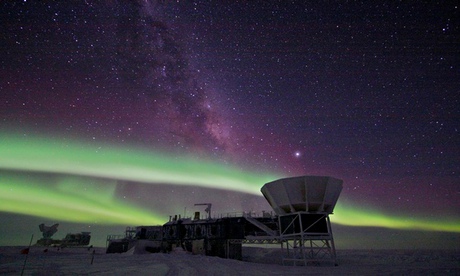 Planck is also measuring the so called B-modes, but they are cautious and haven’t published their conclusions yet. From our everyday experience, say, in politics, one may never expect this: BICEP2 and Planck became allies earlier this year. They announced it during ICHEP 2014, the biggest physics congress on Earth, in July. BICEP2 needed someone who could measure the dust, and Planck accepted. So this big collaboration aimed to two publications: one concerning the dust, and the final joint effort on the detection of the (in)famous B-modes, both to be published this year. In the meantime, we are all eating popcorn and sharing a beer viewing this thriller, hoping for the positive detection of the B-modes and the confirmation of the inflationary theory.

So… (drum roll) here it is! Some days ago Planck posted its dust analysis on arXiv ( a web repository for preprint and not peer-reviewed versions of papers ) and also published it in Astronomy and Astrophysics, a cutting-edge science journal 3. The news are bad: the polarized light from the dust has the same intensity as the signal measured by BICEP2, and, quoting directly from the paper: “Assessing the dust contribution to the B-mode power measured by the BICEP2 experiment requires a dedicated joint analysis with Planck, incorporating all pertinent observational details of the two data sets, such as masking, filtering, and color corrections”. Planck remains cautious on drawing fast conclusions.

On the other hand, another paper was posted some days ago also in arXiv, a new analysis using dust data made public in the past, and favoring the gravity wave detection 4. The authors made their own analysis about the B-mode intensity measured by BICEP2. The original B-modes detected by BICEP2 were somehow twice as intense as they should be from the theory developed by Andrei Linde. This new analysis yields intensity compatible with the one from the theory, proving the gravitational wave generated B-mode detection by 2.5 sigma. A sigma, or a standard deviation, is a measurement of the precision of a result. In physics 3 sigma means evidence, and 5 sigma means discovery. 2.5 sigma means keep looking there. So, Planck says that the BICEP2 signal is tentatively fake, but other analysis (yet to be peer-revieved) says that there is something. We shall wait for the joint analysis on B-modes from BICEP2 and Planck, at the end of the year. May we have a happy Christmas this year in astrophysics?

How everyday astrophysics is done

The Spanish take on the nature of the neutrino: the NEXT Experiment

The light that remains: the cosmic infrared background unveiled