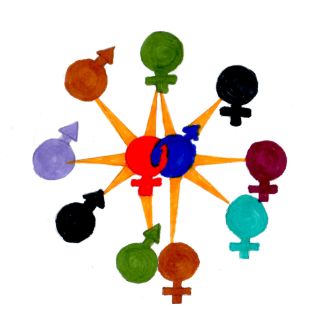 As a professor in Statistics, reports on sexual activity provide a wide source of ideas to make proposals for students in which they have to apply statistical knowledge. Moreover, since the interpretations can be very funny and interesting, my hope is that they will never forget what they have learned.

Here is a very simple example. Consider the general question is: How many partners have you had in your life or in the last year? In surveys, the question is very clear. This means that there is no ambiguity in order to consider someone as a sexual partner or not.

Among other annual surveys, 1 reports that there are a lot of differences from one country to another, and also, from females to males (see Figure). For instance, according to these results, in 2005 the average or mean of sexual partners for men was 10,2 whereas for women it was 6,9. This is a common result; on these type of surveys, men always report more lifetime opposite‐sex sexual partners than women, which apparently does not surprise anyone.

If you ask people their interpretation of this gender gap most times they refer to a different sexual behavior between males and females. No surprise.

Here the question comes. Even if there is a different behavior, is it true that men have more opposite‐sex sexual partners than women, in average? To understand the meaning of this mean, think in a population where there are 10 males and 10 females, with the same lifetime.

For each male (female) i = 1,…,10, denote by n(i) (m(i)) the number of differentopposite‐sex sexual partners (SP). Therefore, the total number of SP for males is n(1)+n(2)+…+n(10) and for females m(1)+m(2)+…+m(10). But each different SP is formed by a male and a female, so that the number of total different SPs must be the same, say N, no matter you count them by adding first across females or across males. Each new sexual partner for a man is also a new sexual partner for a woman. Therefore, the mean for females and for males should be exactly the same!

Think in the real world. In terms of the age of the population sexually active, there are no big differences between male and female distributions. The size of population is also similar. Therefore, the average estimates should be equivalent.

So, where is the difference coming from? Actually, this difference is an aim of study in academia.

One explanation is based on the belief that men overestimate and women underestimate their SPs. But, according to [2], this does not seem to be the case. In this study, participants reported number of lifetime and past‐year SPs and estimation strategies. The results show that there are no sex differences in the past‐year protocols.

On the other hand, the lifetime protocols indicated that people used different estimation strategies, and people who used the same strategy produced similar estimates. The results supports that men were more likely to use the large estimates whereas women use small ones, suggesting that “discrepant lifetime partner reports occur because men and women rely on different estimation strategies, not because they intentionally misrepresent their sexual histories” 2.

Another explanation is related with the underrepresentation of the prostitution in the surveys. This effect is studied in 3. They use data from national sex surveysand studies of prostitutes and their clients in the United States. They find that “prostitute women are underrepresented in the national surveys and that, once their undersampling and very high numbers of sexualpartners are factored in, the discrepancy disappears”.

In these surveys people were asked about the number of SP during the last year and the past five years, so the study does not consider lifetime protocols.

In summary, both results are compatible, a different estimation strategy for estimating lifetime SPs and the undersampling can explain the different statistical results. Which is definitely true is that, in average, men and women have the same number of opposite‐sex sexual partners.

Meaning and the meeting of minds