There are people that have the feeling that if they get to know what something is made of automatically thay have learned something. This attitude is called reductionism. But take water, for example: how knowing that water is composed of molecules and that each of these molecules is composed of two atoms of hydrogen and one atom of oxygen tells you anything relevant about how water behaves, or why it feels wet on your skin? We need something else.

We may understand very well the microscopic theory of a system, just to discover that some other properties emerge from the system that we did not expect. This is why experimental data rule. You may think of a cow as a spherical system, but at the end of the day you will have to assume it has legs, horns and a tail. This is just what happens with some experiments that rely on optoelectronic processes: there are a lot of discrepancies and inconsistencies in the results and it well may be that the model is of the spherical-cow kind. These problems represent serious trouble for high definition techniques like tip-enhanced Raman spectroscopy (TERS) and enhanced optical microscopy (s-SNOM). Now a group of researchers, that includes Rubén Esteban and Javier Aizpurua from DIPC, may have found an explanation 1. And it is exactly what you would expect: legs, horns and a tail.

Take TERS, for example. In order to gather information, a nanometric-scale tip is placed close to a surface, thus creating a cavity that could act as an optical antenna. This is so because the incident light can provoke a strong optical response in the metallic tip due to the excitation of resonant plasmonic modes, i.e, the electrons in the metal become excited by the photons in the incident light. What Esteban et al. have found is that, apart from the composition and size of the tip, the shape of the cavity itself is relevant to this response; in other words, you will not get the same data from a cavity created by a flat tip or a hemispherical one. The importance of the shape of the cavity is paramount for nanometric and subnanometric gaps where strong interactions are present. 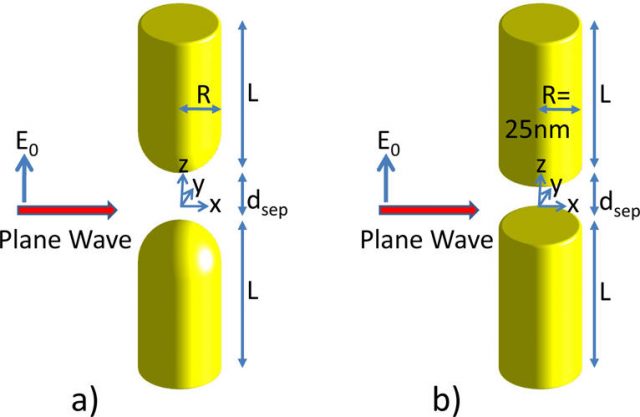 To reach their conclusion the authors studied how two different configurations of nanoantennas would affect the plasmonic response. They considered each antenna as composed of two identical rotationally symmetrical rods opposed by their ends and in the same line; in one case both the ends are flat and in the other both are hemispherical. The structures are illuminated laterally – with the electric field polarized along the rod axes. Then, they resolve rigourosuly Maxwell’s equations for the systems using the boundary element method, thus calculating the response.

In the case of the rods with hemispherical ends the results are similar to that of spherical particles, where the bonding modes – bonding dimer plasmons or BDP, to be precise – red-shift as the gap narrows, in other words, the Coulomb interaction among the electrons make them move away from the gap. But when we use flat-ended rods things change: there are two different sets of modes, plasmons along the rod length – longitudinal antenna plasmons, LAP – and plasmons across the gap – transverse cavity plasmons, TCP – which behave in fundamentally different ways.

So we can see that modifications of the gap, reaching down to atomic-scale variations, can determine the yields and properties of many optoelectronic processes. And this result can be used for good. For example, if controlled in a particle-on-mirror geometry, the dependence on the morphology of the gap can be used as an optical monitor of complex photochemical processes 2, thus accessing information not available in any other way.

This result suggests that the control of the shape of nanometric gaps could open new paths to control responses in nanophotonics relevant to a wide spectrum of applications.

The extreme nanophotonics of the plasmonic nanopatch