A review of the book: The brain electric: The dramatic high-tech rage to merge minds and machines
by Malcolm Gay 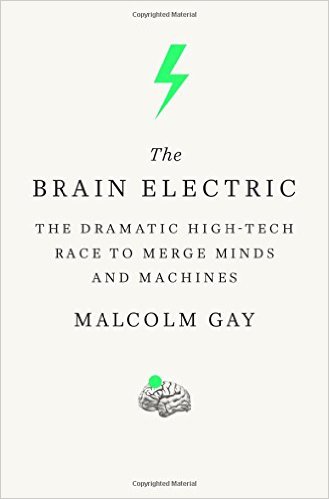 Flying cars, self-tying shoes or a fully functional hoverboard are only a few examples of the inventions which, according to the time-travel adventure sequel Back to the Future Part II, should be available for purchase by now. Predicting the future is never an easy task, and while many of our long-sought inventions don’t even appear on the horizon –like the mentioned flying car –, some truly astonishing scientific and technical advances are, at a slow but steady pace, becoming a reality. One of these advances is occurring in brain-computer interfaces, a field which promises to fulfill another of our long-lasting dreams: to control machines with our own minds.

In his first book, “The Brain Electric: The Dramatic High-Tech Race to Merge Minds and Machines” (Farrar, Straus, and Giroux, October 2015), the writer and Boston Globe reporter Malcolm Gaydelivers a breathtaking, thrilling and mind-stimulating story about humanity’s first attempts to successfully blend brains and computers. In a compelling piece of narrative journalism grounded on interviews of several leading researchers in the field and aimed at a lay but interested audience, Gay discusses the implications of this emerging technology for mind-controlled prostheses, direct brain-to-brain communication, and the very definition of the self that arises when humans assimilate technological hardware as a natural extension of their own bodies.

The book presents the development of the field from its inception 15 years ago as a frenetic race between several research laboratories –most notably, those headed by John Donoghue, a neuroscience professor at Brown University with a keen interest on turning core research into marketable products, Andrew Schwartz, a neurobiology professor at University of Pittsburg and a persistent pursuer of the academic glory and recognition, and Miguel Nicolelis, a renowned Brazilian neuroscientist at Duke University with a strong habit of presenting his results in a glittering way. As we learn along the way, the goal for these fierce competitors is to build the best functional brain-machine interface, a device that would register the brain activity of a disabled person –like a quadriplegic –and use it to gain full control a robotic arm or a prosthesis, giving back to the person part of his lost freedom. We are brought to the front lines of this scientific battle as Gay distils his interviews with some of the most prestigious researchers in the field. Gay captures for us these transcendental moments in which the small steps of the researchers turned into giant leaps for the field: rats that are able to mentally communicate with each other with brain implants, monkeys that learn how to feed themselves using only a brain-controlled arm, or a paraplegic man that delivers the first kick in a soccer game.

Gay’s narrative possesses an elegant cadence, which he uses to break down scientific concepts into clear and intuitive ideas that the reader can savor without much effort. Examples of scientific concepts that are better explained thanks to this capacity are, of course, abundant in the book. When explaining the difficulties of patients learning to control a robotic arm with their brains, for example, Gay points out the similarities with learning to play tennis: we struggle with the weird-shaped object –the racquet– at first, but after many sessions of training, our brains accommodate to its presence, its shape, and to the sensation that it produces in our hand, and when we start to perceive them as a true extension of our own arm, we gain remarkable precision and ability. Thanks to the clear explanations and metaphors, even the densest parts of the book can be followed by a general reader not only without trouble but with fresh interest.

This ease in clarifying concepts is also wisely combined with a fast-paced rhythm at the most intense moments in the story. One of these moments occurs as we first follow Eric Leuthardt, a neurosurgeon with a sharp, incisive mind that aims to understand “the electric current of thought itself”. Upon entering the operating room, Leuthardt performs delicate brain surgery on a young man with drug-resistant epilepsy; this surgery represented the patient’s last hope of enjoying a normal life after all other choices failed to improve his condition. Gay is able to instantaneously engage the reader by sculpting every detail of the scene and transmitting the pressure and anxiety of the moment, which contrasts with the diligence and confidence of the experienced Leuthardt (“Cranial position. Clarity of access. Surgical trajectory. These were the concerns that streamed through Leuthardt’s head.”)

The most attractive quality of the book is, however, the intensity with which Gay portrays the competition between Donoghue, Schwartz and Nicolelis over the years, a competition driven by the search of prestige and recognition among peers –and by the Nobel Prize that is most likely waiting for the winner of such race. Academic competition is a well-known fact for many people inside and outside of science, but it is the particular mix of curiosity, sense of duty and ego what makes scientific confrontations a rara avis that is sometimes difficult to see for the nonscientist, and that the book portrays in a majestic manner. Gay understands the motivations of the researchers involved and he translates the race towards brain-computer interfaces with astonishing detail and insight. His conversations with the researchers reveal an obsessive fear of falling behind (Schwartz confesses, for example: “if [Donoghue] could do the same kind of stuff with his human patients that I was doing with my monkeys, I would have become irrelevant –instantly.”) Even more unusual is Gay’s skill at capturing the reactions of the researchers to the successes of their competitors (Donoghue, about Nicolelis’ often inflated claims: “It this for showmanship? Why is it done? I don’t know . . . it’s sort of not how we usually do that in science.”) All these hints reveal part of the dual nature of this a priori altruistic business: a researcher wishes a certain level of success to other labs –so that the whole field advances and grabs attention –but not so much that he is pushed aside from the spotlight.

The desperate need to secure support from major funding agencies, like DARPA, to obtain federal approval for invasive brain recording technology, or to attract capital and investors for their spin-off companies is another essential aspect of the race that Gay captures with clarity and savoir faire. The entrepreneurial side of the story is often reflected in comments on patents that protect the researchers’ intellectual properties. Leunthardt’s words are a good example of this: “between the surface of the brain and the scalp is what we own. Basically, if you try to decode intention using [a common brain recording technology], that’s covered by this patent. It’s a very, very powerful claim.” This creates an interesting sense of conflict with the more altruistic side of the quest, reflected in the many life stories of disabled people and war vets that motivate researchers and other key people in the book.

Gay leaves some of the most intriguing and interesting questions unanswered, like how to grasp real objects when controlling a robotic arm with your brain activity –a task that most subjects have difficulties with. This is a nice reflection of how things are in real-life research, and it would have been a nice opportunity to present the necessarily incomplete nature of scientific research –always with a new boundary to push. Gay’s exposition of these unsolved problems is however not as precise as the rest of the book, and it may leave a certain sense of confusion on the reader. At this point, however, the interested reader will probably investigate the answers on his own, which makes the problem somehow minor.

In short, Malcolm Gay’s new book is successful in portraying the fascinating story of our first steps in merging brains with machines, and it kindles in the reader, at least, a glimpse of the passion driving the scientists behind these advances. The same pioneer’s passion which dictates that the best way to predict the future is –unless you own a time-traveling Delorean –to write it yourself.

Making room for a little chaos in your brain

A brain inside a chip