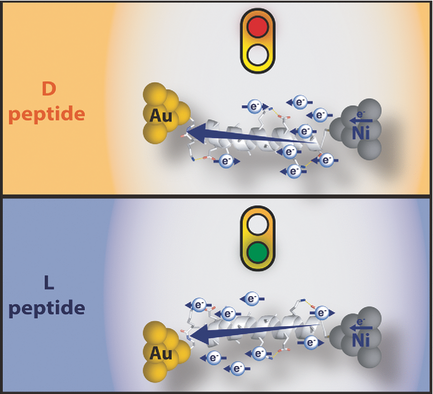 We have considered in some previous articles the importance of the spin-orbit interaction. But it is interesting to go through some basic concepts we have seen elsewhere once again in order to grasp the surprising discovery we will be talking about below.

The analogy for the spin usually goes this way: Imagine that the electron is like the Earth, orbiting the nucleus which would be like the Sun, and at the same time rotating on its axis. Each motion has its associated angular momentum, which we call the orbital and spin angular momentum, respectively.

This makes it perfectly clear for the student of physics what spin is about, but there is a huge problem. The classical description of electron spin —as resulting from a spinning electron— is incorrect. More recent theory indicates that the electron is a point particle, without spatial extent. Therefore, the electron is not modeled as a rigid object and cannot be considered to be spinning. If we were to model the Earth as a single point, it would have no moment of inertia about its spin axis and thus no spin angular momentum. But only when our analogy includes the finite size of the Earth, spin angular momentum becomes possible.

Despite this conceptual difficulty, all experimental evidence supports the idea that an electron does have some intrinsic angular momentum that can be described by the spin magnetic quantum number. P.A.M. Dirac showed that this fourth quantum number originates in the relativistic properties of the electron.

We have already mentioned that the spin quantum number is a magnetic one. Using our analogy again: The sphere carries an electric charge, so the spinning motion leads to current loops and to a magnetic moment. But, once again, the origin of this spin angular momentum is fundamentally quantum mechanical, so it is not correct to model the electron as a spinning charged sphere. Paradoxical, is it not?

From the point of view of the Earth we can consider that the Sun revolves around it. In our analogy, the nucleus would orbit the electron. But the nucleus has a positive charge, and we know that a moving charge originates a magnetic field. As the electron has an intrinsic magnetic moment (spin) there must be a magnetic interaction between the spin and the magnetic field due to the orbit. This is what is known as spin-orbit effect.

Electron transport in chiral systems exhibits a number of remarkable features having to do with the fact that the spin–orbit interaction induces a coupling between the angular momentum and the spin of electrons, which translates into the appearance of spin polarization and spin filtering. The phenomenon is called electron dichroism as, in many ways, it is the equivalent of the better-known optical dichroism effect. In the latter, it is the rotation of the plane of polarization of the magnetic and electric components of the electromagnetic field that is experimentally measured, whereas the former corresponds to the polarization of the electronic spin. The phenomenon is also known as chirality-induced spin selectivity (CISS), inferring that the transport of one of the electronic spins is facilitated over the other in a chiral structure.

In its simplest description, CISS in a molecular junction can be considered as a one-electron scattering process due to the molecular electrostatic potential of the chiral structure. In photoemission experiments, electrons are photoexcited from a metal surface and transmitted through a self-assembled monolayer of chiral molecules; whereas in the case of local scanning probe microscopies, there is a transport process of electrons under a bias voltage through the junction.

The researchers measured the spin-dependent single-molecule conductance of an α-helical peptide sequence of 22 amino acid (AA) residues of both L- and D-isomers, employing a spin-polarized version of the STM break-junction approach. The procedure is based on driving a magnetically polarized STM Ni tip in and out of contact to/from an Au(111) substrate functionalized with the target peptide immersed in a helical-inducing liquid medium. The conductance comparison between both isomers allows the direct determination of the polarization power of an individual chiral molecule.

The control of two experimental variables, the magnetization orientation of the Ni tip and the chirality of the peptide, allows probing the three key physical asymmetries of the junction regulating its conductance: magnetoresistance, chirality, and spinterface (interfacial magnetism arising as a result of the metal/molecule interaction), and they allow the experimenters to extract a value of the spin-polarization power (capability to spin-polarize electrical current) of a single chiral molecule of ≈60%.

These experiments can be understood and rationalized in terms of a theoretical model that connects spin polarization with transport in molecular junctions, which generalizes the well-established Landauer model for electron transport in metal–molecule–metal junctions to include the filtering effect of the molecular chirality and the presence of a magnetized electrode. The combined theoretical and experimental analysis affords a novel way to estimate the molecular spin-polarization power, which is essentially the spin-dependent transmission probability, a magnitude that is directly linked to the single-molecule conductance.

These results are very important to understand electron transport through chiral media in general and especially electron transfer in biological systems, because the same physical mechanism studied provides for a mechanism to lower the transmission tunneling barriers in biological molecules.