The idea that human beings are composed by two kind of ‘substances’, a material body and a spiritual mind, or soul, is probably as old as modern human beings, and has certainly insufflated most of the world religions, as well as a big number of philosophical theories about human nature. Even non-religious people admit in a non small proportion that we are (or ‘have to be’) more than just flesh and bones. In modern philosophy, it was Descartes the author that gave the most persuading arguments in defence of this dualist view of human beings. From his famous argument, “I think, therefore I am”, he inferred that the reality of our thinking, or our consciousness, is more certain, and more clearly knowable, than that of the physical world, and he also argued that consciousness can not have a material nature: since we can conceive that we are conscious mind without a body, it would follow from this, according to the French philosopher, that the nature of consciousness, or thought , or mind, is different from the nature of physical objects (for example, we can not conceive of an object having mass without being a physical object, so the concept of ‘mass’ would be intrinsically attached to the concept of physical body, in a way that the concept of ‘mind’ is not). After all, he would say, “is it not obvious that being conscious is something radically different from moving an arm or digesting our food?”. Being thinking, remembering, listening or suffering are a type of activities that do not resemble at all a ‘physical activity’. The difference between mind and body seems, hence, as radical as the difference between an ocean and an equation, for example; so radical that we need to think about each by means of a totally different system of concepts. Or isn’t it?

The truth is, however, that, no matter how apparently different mental and physical activities look like, it is also obvious that there is an intimate connection between both: if I do not lit the light in the darkness, my mind could think or wish whatever she likes, but I will not see anything (and seeing is, of course, a kind of mental activity); if I ingest a certain amount of ethanol (a rather simple molecule, by the way), my mental processes will suffer a noticeable change; if my mind makes me remember that I put something on the stove half an our ago, my body (as if by magic?) manages to start immediately running towards the kitchen; and so on, and so forth. We must not assume, hence, that mind and body are totally heterogeneous (what would make their interaction and interdependence an absolute mystery), but we should rather put a very different question: if mind and body are so obviously connected, why it is so obvious for us the impression that they are so heterogeneous? This is the question I shall try to answer in this and the next entries.

To make a long story short, I think there are mainly two families of facts that are responsible of the nearly self-evident qualitative distinction between the mental and the physical. The first one are those psychological phenomena in which people literally experience a kind of ‘separation’ between body and soul, and the three main types of these phenomena are the so called ‘out-of-body experiences’ (OBE), the ‘near-death experiences’ (NDE), and the ‘mystical experiences’ (ME). These phenomena are not experimented by a majority of people, though they are not as unusual as you might think; but they could only serve as a direct argument for the immaterial essence of the soul if you have experienced some of them by yourself, and my thesis is that this immateriality is (for most people) not only a ‘well confirmed hypothesis’ (that might be confirmed by the testimony of others), but something that is almost directly perceived. So, besides these three types of ‘psychical’ phenomena, there must exist some other mechanisms, more universal than the former ones, that tend to generate the illusion of immateriality. But these will be the topic of a future entry. 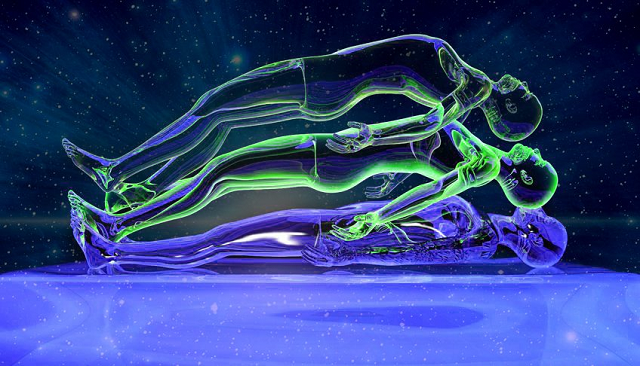 In out-of-body experiences (OBEs), an individual, usually in an involuntary way, but sometimes in intended fashion, feels that she has been separated from her body, and that she can perceived the environment, including her own organism, from a different point in space (usually higher) than where her eyes actually stand. At times, the subject also feels that she can move floating above the body and to more or less far away places. This is a type of experience that about one of every ten people has had, and they are, obviously, the basis of the popular belief in ‘astral travels’. Since they are experiences that some individual may voluntarily provoke, and that can also be triggered by external causes, they have been apt for rigorous experimental study, much more than the other types of experiences I shall discuss (for example, Blackmore, 1983 1).

These investigations have concluded that OBEs are a type of hallucination, i.e., a distorted perception. Although we have the intuitive impression that we only need to open our eyes to see what there is in our surroundings, the truth is that our brains perform an enormous amount of processes systematically decomposing and recomposing the information it gets from our senses, processes that take place in very different parts of our brain structures, and that, in the end, produce the illusion of being surrounded by objects that behave ‘as they should’. Amongst the objects whose behaviour the brain has to reconstruct before offering them to our consciousness as-if-they-were-just-there, there is the very same individual that is perceiving her body and her cognitive processes themselves, or of the parts of them that it is biologically relevant that we perceive. Your own self-perception is the result of a colossal number of neurological processes, not less than any other perception you happen to have. And, as with the case of any other perception, it can also be distorted by a number of causes: it may happen that, under certain conditions, your brain constructs an image of yourself that is very different from the one it would generate in ‘normal’ circumstances. And this distorted imaged will look as ‘real’ for us, simply because this ‘seeming real’ is the most important quality our brain attaches to the perceptual images it constructs, no matter if they are ‘normal’ or ‘abnormal’.

The most interesting conclusion from the scientific studies on OBEs is the confirmation that they can be artificially generated. For example, we knew from ancient times that some drugs are capable of doing exactly that, amongst other perceptual distortions. But more recently it has been proved that similar experiences can be produced by direct electrical stimulation of certain brain areas. For example, as Thomas Metzinger relates in his book The Ego Tunnel 2, neurologist Olaf Blanke identified in 2002 that the temporal-parietal articulation (more or less over and behind your ear) as a region whose stimulation, or its deterioration after an accident, can generate OBEs, what does not imply that this is the only physical source of this kind of experiences. Other fascinating experiments do not imply a direct manipulation of the brain, but are based on the artificial creation of illusory perceptions. One nice example would be something like the opposite of an OBE: instead of feeling that we are ‘out of our body’, what happens here is that something that is not our body is experienced by us as if it were. This is the case of the rubber hand illusion, for example: a subject extends both hands on a table, but one of them is hidden to her own view by a panel, and next to it there is a rubber hand in a similar position and posture. The experimenter touches simultaneously during some time the hidden real hand and the artificial fake one, and after some minutes, the subject perceives the latter as if it were her real hand, and she even starts perceiving something like a ‘ghost arm’ connecting her shoulder and the fake hand. Metzinger extended this experiment in order to produce what he called a ‘virtual OBE’: while the subject is walking, she wears virtual-reality glasses in which it is projected the image recorded by a camera that is moving one meter behind her, so she is seeing (from her back) her own body walking one meter in front of her. After some minutes, she starts perceiving that image of the body as if it were her real body, and as if she saw it from a ‘spiritual’ or ‘astral’ body that were walking one meter behind the physical one.

Why people believe in the soul (2): near-death and mystical experiences

Why people believe in the soul (& 3): How does the brain perceive itself?

Read it twice: heat transfer from a cooler body to a hotter body

Pseudo-hallucinations: why some people see more vivid mental images than others – test yourself here