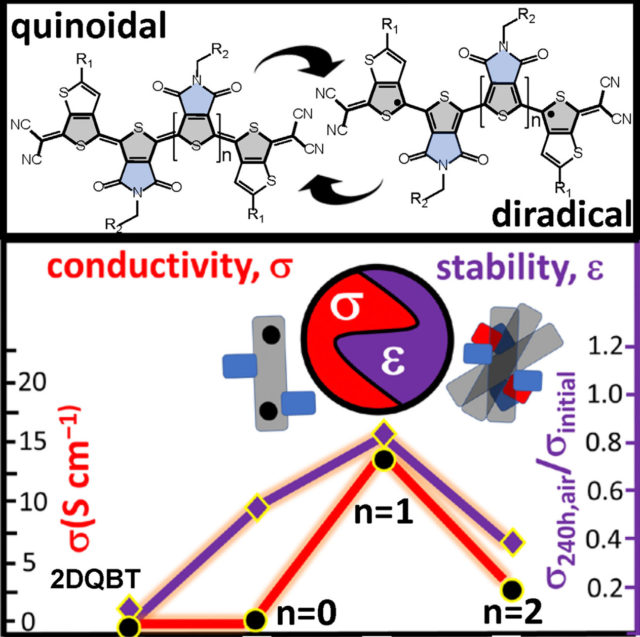 Many aromatic compounds can be made into organic semiconductors by doping them with a substance such as iodine, thereby producing mobile carriers of electric charge. This is analogous to the doping of silicon in an ordinary semiconductor. The benefits of using organic compounds are evident, namely, the resources are available everywhere, extremely cheap, and there is a great versatility for synthesizing the different compounds.

Enter diradicals. A diradical is a molecule that has two unpaired electrons at different points in the molecule, so that these so-called radical centres are independent of each other. Or, technically put, a diradical is a molecular species having two unpaired electrons, in which at least two different electronic states with different multiplicities, electron-paired (singlet state) or electron-unpaired (triplet state), can be identified.

Organic diradicals in which there are rings with alternating single and double bonds (Kekulé-type), are intriguing molecules from several points of view. When they possess incipient-to-medium diradical character, unique electrical, optical, and magnetic properties emerge, motivating organic chemists to create a wide range of diradical compounds.

Doping, as we already mentioned, is a vital strategy in achieving high-performance organic electronic devices. Compared to p-doped materials, there are only a few complementary n-doped conductors reported and all of these are unstable in ambient conditions, a limitation for the consolidation of organic materials in the electronic market. The well-known instability of the electrically active radical anions in the n-doped substrates, becomes one of the most critical challenges to solve.

Now, a team of researchers that includes DIPC researchers Abel Carreras and David Casanova (Ikerbasque) has demonstrated 1 that diradical character is one of the conditions for achieving stable n-type doped conducting materials.

A series of thienoquinoidal oligothiophenes from dimer to pentamer and substituted with an odd and even number of pyrrolo-dione groups were prepared and proven to be n-dopable materials showing outstanding ambient stability and excellent electrical and thermoelectric behavior.

Going from dimer to pentamer, a progressive change in the diradical character and aggregation mode is observed, with the tetramer showing an optimal diradical character that allows favorable intermolecular contacts, while the presence of the two dione groups promotes a cholesteric-like, perpendicular to the long axes of the molecules, stacking.

Both features synergistically contribute to form a material with exceptional ambient stability for an n-doped system exhibiting high electrical conductivities and thermoelectric performance.

These findings offer a new design concept to the organic electronic community for the realization of new and improved applications, such as n-doped conductors and in organic thermoelectrics.

Looking for new materials with applications in organic solar cells