The Mars 2020 rover mission is the next step in robotic exploration of the Red Planet. Unlike Curiosity, Mars 2020 will try to find answers to key questions about the potential for life on Mars, seeking signs of habitable conditions on Mars in the ancient past, but also searching for signs of past microbial life itself. The Mars 2020 rover introduces a drill that can collect core samples of the most promising rocks and soils and set them aside in a “cache” on the surface of Mars. A future mission could potentially return these samples to Earth.

Currently, the mission’s webpage states that “The mission is timed for a launch opportunity in July 2020 when Earth and Mars are in good positions relative to each other for landing on Mars. That is, it takes less power to travel to Mars at this time, compared to other times when Earth and Mars are in different positions in their orbits”. It would seem that the planets being closer to each other is a sufficient condition for a minimum power use. But it is not. An optimal trajectory is not that easy to calculate, as a recent review 1 reveals.

The spacecraft trajectory optimization problem can be described as the discovery of a trajectory that satisfies some criteria, including initial and terminal conditions. In recent years, considerable progress has been made in the development of methods to find optimal trajectories for spacecraft in various space missions. Within this progress, each step in spacecraft trajectory design can be categorized according to the elements that are involved in finding a solution to the optimal trajectory problem, such as the mathematical model, objective, approach, or, more importantly, the method, technique and algorithm.

According to the reviewers, the entire process of solving a spacecraft trajectory optimization problem can be divided in four steps. This general process includes mathematical modeling of system dynamics, defining appropriate objectives, developing an approach and, lastly, achieving the solution. 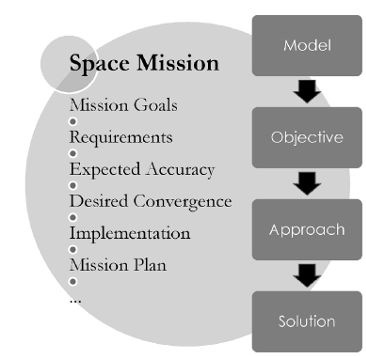 The first step to solve not just a spacecraft trajectory optimization problem but indeed any orbital mechanics problem involves a firm understanding of the dynamics inherent in the system. It refers to the mathematical modeling of the problem which involves choosing a set of states to represent the system and derivation of motion equations for spacecraft.

As the third step, the type of methods and techniques which are dedicated to solving the trajectory design problem are the main feature that characterizes the approach. Two categories kind of methods can be used, analytical and numerical.

The fourth step is to solve the problem regarding the developed approach. If the analytical approach is developed in the third step, the solution is likely to be a closed form analytical solution. However, if the numerical approach is used, the problem usually turns into a black-box optimization problem and needs numerical algorithms to achieve a solution. Most of the spacecraft trajectory optimization problems end in the latter form, to be solved by numerical techniques rather than by means of an analytical solution. The reason is that a typical spacecraft optimization problem does not have a closed form solution due to its non-linearity, unless specific conditions and assumptions are considered in the approach. Such assumptions may limit the matching between simulation and reality in spacecraft motion.

The new review categorizes the key elements within the general process of spacecraft trajectory optimization. While reflecting the research that has been done over the past decade, it provides a road map of currently available tools for the general process of spacecraft trajectory optimization. This road map to be effective needs clear definitions in a field where approaches, solutions, methods, strategies, techniques and other terms are often used interchangeably, and symbols are shared among different parameters; hence, terminology and definitions are clarified as well.

MAVEN and how the sun blew Mars atmosphere