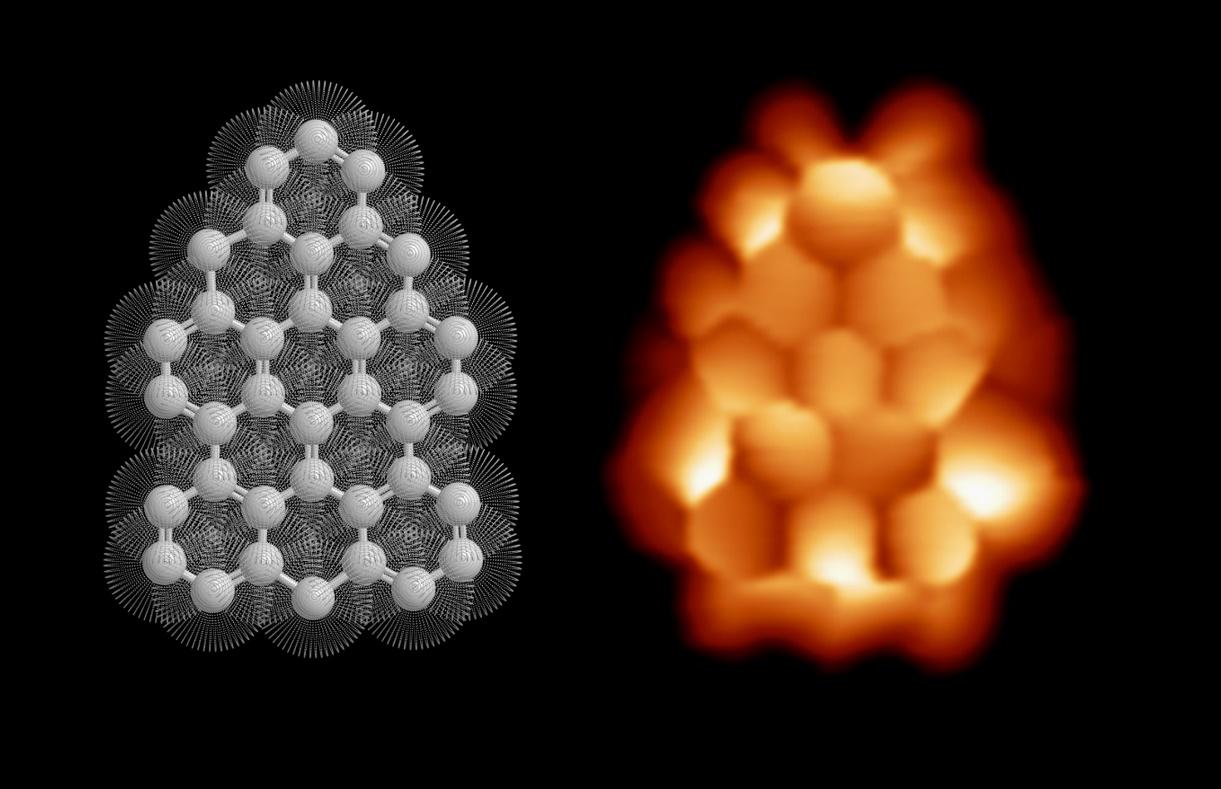 Graphene is a diamagnetic material, this is, unable of becoming magnetic. However, a triangular piece of graphene is predicted to be magnetic. This apparent contradiction is a consequence of “magic” shapes in the structure of graphene flakes, which force electrons to “spin” more easily in one direction. Triangulene is a triangular graphene flake, which possesses a net magnetic moment: it is a graphene nanometer-size magnet. This magnetic state opens fascinating perspectives on the use of these pure-carbon magnets in technology.

However, the robust predictions of triangulene magnetism stumbled with the absence of clear experimental proofs, because the production of triangulene by organic synthesis methods in solution was difficult. The bi-radical character of this molecule caused it to be very reactive and difficult to fabricate, and the magnetism appears to be very elusive in those few successful cases.

In a new study 1, this challenge was revisited using a scanning tunnelling microscope (STM). After assembling a triangular-like piece of graphene on a clean gold surface, high-resolution scanning tunnelling spectroscopy measurements revealed that this compound has a net magnetic state characterized by a spin S=1 ground state and, therefore, that this molecule is a small, pure carbon paramagnet. These results are the first experimental demonstration of a high-spin graphene flake.

The findings were further complemented with atomic manipulation steps of hydrogen-passivated triangulene side-products occasionally found in the experiment. By controlled removal of these additional hydrogen atoms in the experiments, the spin state of the flake could be modified from a closed-shell, doubly hydrogenated structure, to an intermediate S=1/2 spin state, and finally to the high-spin S=1 state of the ideal molecular structure.

The experimental proof of a spin-state in the absence of a magnetic quantization axis (detectable by spin-polarized STM) or magnetic anisotropy (detectable by spin-flip inelastic tunnelling spectroscopy) is not simple. In this work, the spin signature was obtained from the underscreened Kondo effect – an exotic version of the standard Kondo effect described in the 1960s – that can arise in high-spin systems. Its observation in a graphene flake on a metal has not been reported before and brings here novel insights to understanding spins interacting with surfaces.

How to create a band gap in graphene using lead