Inducing magnetism in topological insulators leads to exotic quantum phenomena such as the quantized anomalous Hall effect. The quantum anomalous hall state is characterized by a dissipationless edge mode carrying electrons of only one spin direction. This unique effect is a path for the creation of the next-generation low-power-consumption electronic devices. In terms of the electronic structure, the surface Dirac cone of the magnetic topological insulator will be gapped due to the time-reversal symmetry breaking.

So far, most efforts to incorporate magnetism into a topological insulator have been performed by doping magnetic impurities inside topological insulator crystals. However, this approach produces inhomogeneous samples and impurity states, making the experimental observation of the quantum effects limited to very low temperatures.

So-called magnetic extension has been recently proposed as a new method to combine magnetism with topological insulators. Bismuth chalcogenides have been successfully grown on different substrates. Generally, regardless of the substrate used, the resulting films have a textured surface that is characterized by pyramidal single-crystal domains with quintuple-layer steps. Magnetic extension consists in placing a magnetic monolayer inside the topmost quintuple layer of the topological insulator.

As such, the presence of a Dirac cone gap as well as its closing in a magnetic topological insulator is still not fully understood even in stoichiometric well-ordered samples. Actually, there has been no experimental work showing the systematic change in the gap size deduced from sharp spectral features over a wide range of temperature. 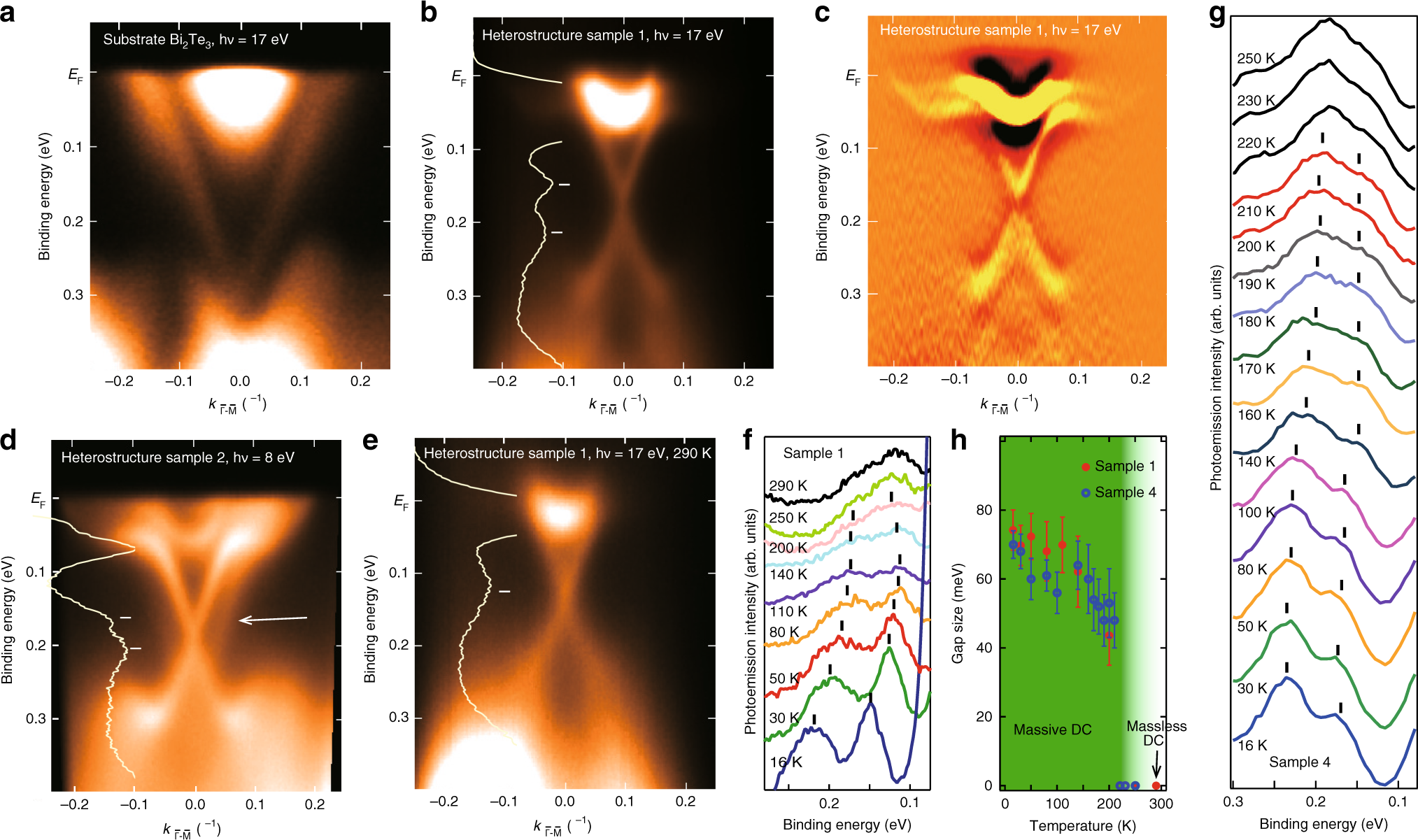 Now, a team of researchers has achieved 1 the successful experimental fabrication of such an exotic magnetic topological heterostructure. The new heterostructure Mn4Bi2Te7/Bi2Te3 is the result of inserting multiple magnetic layers into the topmost quintuple layer of the original topological insulator Bi2Te3.

A massive Dirac cone with a gap of 40–75 meV at 16 K is observed. By tracing the temperature evolution, this gap is shown to gradually decrease with increasing temperature and a blunt transition from a massive to a massless Dirac cone occurs around 200–250 K. In other words, this is the first time that the Dirac point gap of the interface topological state of a magnetic topological heterostructure is shown to eventually close.

Structural analysis shows that the samples also contain MnBi2Te4/Bi2Te3. Magnetic measurements show that there are two distinct Mn components in the system that corresponds to the two heterostructures; MnBi2Te4/Bi2Te3 is paramagnetic at 6 K while Mn4Bi2Te7/Bi2Te3 is ferromagnetic (critical temperature ~20 K).

These results could signify an important step towards future device applications.