Acenes are the class of organic compounds made up of linearly fused benzene rings. The best known of acenes is the compound with three rings, anthracene. The larger representatives, like pentacene (the one with five rings) have potential interest in optoelectronic applications and are actively researched in chemistry and electrical engineering.

Due to their planar structure and electronic configuration, starphenes tend to stack quite nicely, what implies that their solubility is quite low. This makes their synthesis, as such, a real challenge; in many instances substitutions are used to get approximations to the real thing. Therefore, only a few examples of unsubstituted starphenes have been reported until now. The largest starphene known till now is decastarphene-(3,3,3), the one with three anthracene arms, and it was reported in 1968!

As mentioned, to overcome this solubility problem, pendant groups are often introduced at the molecular peripheries, enhancing both solubility and stability of the starphenes. However, these bulky substituents can modify the electronic properties of the molecules, their packing and moreover affect their interactions with metal surfaces, which can be limiting factors in the applications of the substituted starphenes in organic and single-molecule electronics.

If solubility is the problem, then the logical alternative route is using no solvents. Certainly, on-surface synthesis in ultra-high vacuum allows the preparation of organic structures that are hardly attainable by traditional in-solution chemistry. The only problem is that this method yields just minute amounts of the product. If unsubstituted starphene molecules are ever going to be used as semi-conducting materials in organic electronic devices, or as single molecular gates, new scalable, efficient methods are badly needed. 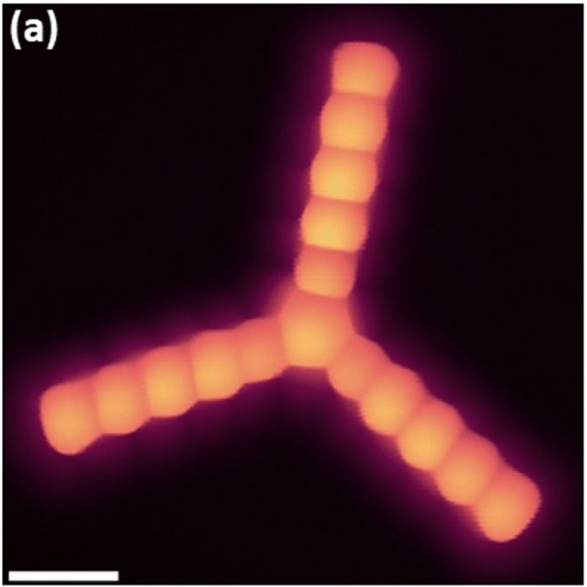 Now, a team of researchers report 1the largest unsubstituted starphene that has been synthesized to date: the one with pentacene arms. The product is characterized with a variety of analytical methods; high-resolution scanning tunneling microscope experiments unambiguously confirm its expected structure and reveal a moderate electronic delocalization between the pentacene arms.

The new and efficient strategy is based on a synthesis of a carbonyl-protected starphene precursor that is thermally converted in a solid-state form to the neat starphene. This synthetic route enables to produce starphene compounds in large quantity, which is essential for the investigation of electron/hole mobilities in bulk and offers the possibility to implement them in optoelectronic devices.