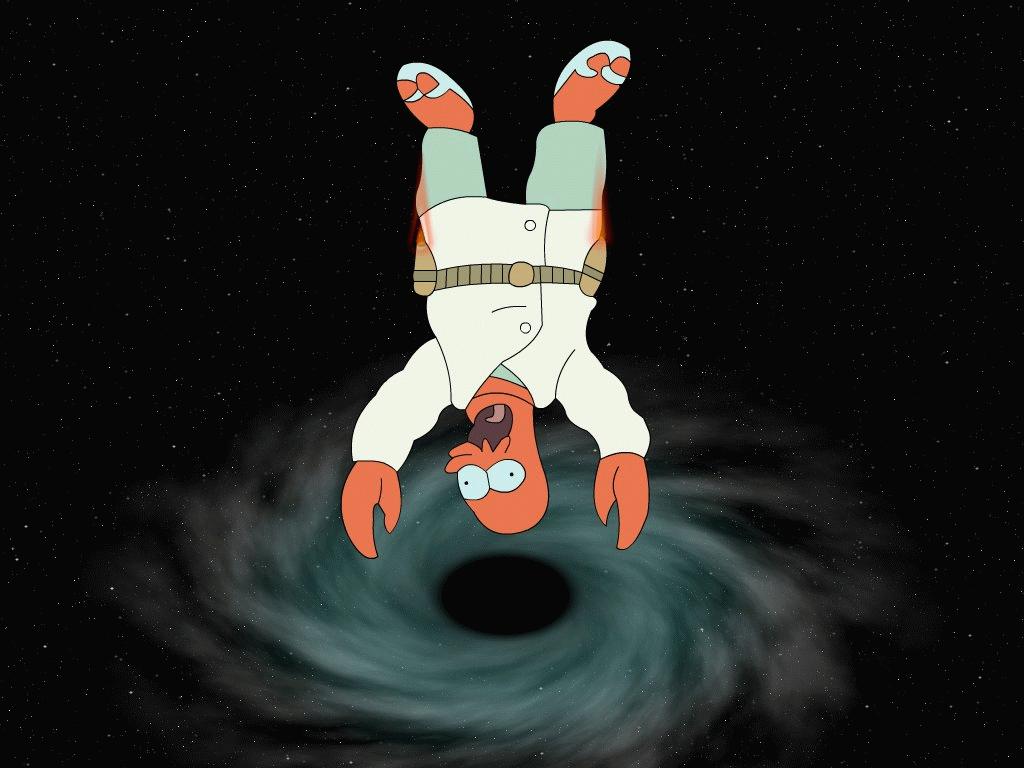 During the last year, a longtime forgotten controversy was reactivated by a very interesting paper 1 written by J. Polchinski and his collaborators, in which they questioned whether the so called black hole complementarity principle is a good solution to the apparent information paradox of quantum gravity. This is a question that attracted a lot of attention during the 80’s and 90’s but no relevant work had been published since then, apart from the few insights given by the AdS/CFT correspondence. We can track its origin to Stephen Hawking himself in some moment around 1974, just after he published his laureated work about black hole radiation.

Back before Hawking’s work, black holes were considered as perfect black spheres with no properties along the surface of their event horizon because, according to General Relativity, it is not a special region of spacetime at all, apart from denoting the place where the light cannot escape from as seen by an external observer, and therefore any object could cross this horizon without any problem. Actually, nor even the gravitational acceleration is very high at that point. This fact is usually dubbed the “no drama” scenario. It is one of the most empirically supported facts about black holes and relates directly to the equivalence principle. If gravity does not do “strange things” at the surface of Earth, it also shouldn’t at a black hole, the surface gravity of which is of the same order of magnitude. Therefore, an observer could cross the event horizon without feeling anything unusual.

However, as Hawking noted in 1974, this interpretation of the physics of a black hole caused a big problem when one considers it from the point of view of a quantum theory. In order to understand the point of the English scientist, consider the following mental experiment. Imagine that we are external observers and we have in our hands a box full of some gas which is in thermal equilibrium and, therefore, possesses a certain amount of entropy. In some moment we throw this box into a black hole and we wait till it crosses the event horizon. At this point, the mass of the box contributes to making the black hole bigger and more massive but… what happens with the entropy? If we trust the GR interpretation of the horizon, the entropy in the box does not contribute in any form and the black hole is still a perfectly flat black surface. In other words, the entropy disappears, but this fact is in contradiction with one of the most fundamental principles in physics, the Second Law of Thermodynamics, which states that no entropy can be destroyed in our universe. Also, if we consider the entropy as a statistical property of some microscopical system, as quantum physics imply, then we could expand this argument and finally prove that we can have a theory with probabilities higher than one, which is, of course, a very non desirable property.

The solution given by Stephen Hawking to this information paradox (entropy is equivalent to the physical definition of information) was to consider that black holes are actually grey, meaning that instead of being eternal immutable objects, they actually emit energy as radiation in a particular way. That emission carries the entropy of the fallen objects with it, so no entropy is destroyed in the black hole and the second law is safe. However, this solution implied another big problem, as Hawking himself noted 2, due to the fact that the emitted radiation is in what is called a thermal state.

To understand what this problem is, consider two observers, Alice, who is falling into the black hole, and Bob, which is orbiting it. Let’s assume that Alice has a very important message that Bob wants to know. Since he is a clever guy and knows about Hawking’s result for the black hole radiation, he decides to wait until Alice crosses the event horizon and then examine all the radiation emitted by the black hole in order to find the information carried by the girl in the entropy radiated. And here the important caveat comes. Since the radiation emitted by the BH is in a thermal state, that means roughly that it is emitted in a random way, not time ordered, i.e., the last bit of information that falls into the BH could be the first to be emitted and, in general, we do not know in which order the bits are going to be radiated. Therefore, on average, Bob only needs to look at half of the total radiation in order to find Alice message.

Everything looks fine from Bob’s point of view but, what happens from Alice’s one? For the girl, after crossing the horizon, nothing special happens and she will be alive till the last moment of life of the BH, moment in which she won’t be able to avoid the singularity inside the hole and she will die. But the important statement is that when Bob receives her message, in the best case just after half of the BH has evaporated, she will be still alive and with the message in her hand. The conclusion therefore is, since both Alice and Bob have the message, that the black hole has cloned the information!!!

However, this is a horrible conclusion if one wants to define a quantum theory of gravity, since copying of information means, in the language of quantum mechanics, that an observer could measure a quantum mixed state without making it to collapse into a pure state and therefore violate one of the most fundamental postulates of quantum mechanics. Therefore, something strange must be happening here and the physicists of the time argued that there should be some mechanism that forbids Alice and Bob to have both of them the same information. Hence, during the following years to Hawking’s conclusion, relativists tried to find the lost piece of the black hole puzzle.

The first hint to a solution to this problem was given through the 80’s, when several physicists showed that in order for Bob to be able to recover the message carried by Alice inside the BH, she would have to throw it with an energy bigger than the energy contained inside all the BH, something which is clearly impossible and therefore forbiding the same observer to see both copies of the information.

The final solution came from one of most important persons of late 20th century physics, Leonard Susskind, who, together with L. Thorlacius; proposed 3 what is called “Black Hole Complementarity Principle”, which states something like the following:

“After Bob has received the message from Alice via the Hawking’s radiation of the Black Hole, it is impossible for him to enter the BH and recover Alice’s copy before the singularity kills her.”

Or, forgetting about the Alice and Bob example and generalizing the idea, what the complementarity principle says is that

“Two different observers see the quantum information in a complementary and different way, no one of them being able to see what the other measures.”

This idea was strongly supported by the mental experiments designed by many physicists 4 and by the computations of the energy that Bob needs to receive the second copy of the information, and the only caveat to its formulation is that since we do not have a satisfactory theory of quantum gravity, a full computable realization of this principle is not known. But everything points to that this one should be the solution to the information paradox. So, at this point, everybody, almost everybody is maybe a better phrasing, has accepted this principle and focused on other things, like the just discovered AdS/CFT correspondence.

Therefore, everything was fine and the problem was solved until July of 2012, when Joseph Polchinski, a well known string theorist, together with his collaborators of the University of California, uploaded to the Internet a preprint that would destroy everything we knew about Black Holes, but this will be told in a future post.

Some black holes are anything but black – and we’ve found more than 75,000 of the brightest ones