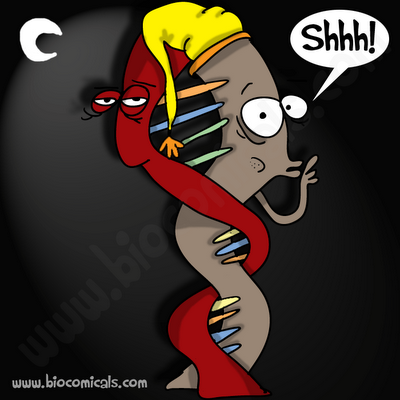 In the previous article of this series starred by ribonucleic acids, we found out about how an RNA molecule is able to regulate complex cascades of molecular events as critical as to decide the fate of a whole cell lineage. But RNA is also capable of other intriguing functions, and one of the most recently discovered has actually become a biochemical tool broadly used in cell biology research. However, there is a curious fact about this kind of molecular approaches: usually, we get to develop the strategies and tools with a strikingly high efficiency and reproducibility, but we do not actually know what is going on inside the cell when we apply them. Today, we will learn interesting details of the process called RNA interference (RNAi); a very commonly used strategy, yet quite mysterious.

I recall the first time I heard about RNAi, back in my last years at University. It appeared like something surprising, a process that seemed to defy all known features of nucleic acids and genetic regulation. Very basically, the process involves a molecule of RNA that somehow targets a particular messenger RNA molecule, promoting its degradation. It is a way to inhibit gene expression, without “touching” the DNA; however, in an extremely specific manner. After years of the first description of one of these processes (around the latest 1990’s), we have unveiled many of the molecular steps and participants in the process, and researchers have found many cases in which not only gene silencing, but also stabilization of mRNA and hence maintenance of gene expression, is achieved by this strategy. RNAi has been shown to be a physiological mechanism that participates in the regulation of a strikingly high number of cellular functions, with a large involvement in developmental stages and defense against foreign RNA molecules which enter the cell without being invited (viruses). And what is the difference between RNAi molecules and the normal RNA molecules like mRNA? Surprisingly, there is no chemical difference at all; it is just RNA, only smaller and present in either double or single chain, depending on the particular participation on the interference process. The most studied and abundant, are small interfering RNA (siRNA) and microRNA.

But as usual, there are many other players responsible of this task. Most of them form part of a macromolecular complex named RISC (RNA-induced silencing complex) which includes a different set of siRNA or microRNA molecules (some of which serve as the guides that “identify” the specific RNA molecule, since they contain complementary nucleotide sequences) and several proteins with the capacity to cut RNAs into smaller pieces, like the one called Dicer. In this way, longer RNA molecules are cut into the smaller siRNAs. Finally, a component of the RISC complex called Argonaute is the ultimate responsible of the destruction: after being guided and taken towards the target RNA molecule, proceeds to its cleavage (in the case of gene silencing induced by RNA interference). Years of empirically manipulating pre-designed and specific siRNAs have ended up in the development of a refined technique that uses this cell machinery to target and knockdown our desired gene, either temporary or constitutively (this is the way some details of the functions of Braveheart, in the previous article, were discovered).

As one can imagine, this process is quite elaborated, and involves many steps and participation of different interacting molecules; at the present time it is still unknown the concrete details of where and how some steps are taking place. The cell is a complex and dynamic structure, full of elements and compartments and as such, probably the exact location where a process like RNA interference occurs is critical for its regulation. Several data point to a participation of membrane-associated trafficking inside the cell, and the finding of a conglomerate of structures called P-bodies (Processing bodies), enriched in miRNAs, argonaute proteins, and target mRNAs, has been suggested as a possible nucleus of RNA interference activity. However, it was unknown to what extent P-bodies are critical sites for RNAi or just a consequence of the accumulation of the involved proteins.

The work by Lukas Stalder and collaborators 1 partially answers some of the mysteries concerning RNA interference and produces an interesting view that enriches our knowledge of the cellular biology. Basically, the strategies used were focused on tracing exogenously introduced siRNA into cells, comparing always with non-treated cells. Interestingly, the first experiments revealed that the distribution of proteins involved in RNAi processing did not change between both conditions. Further experiments analyzed the distribution of some of these proteins (like argonaute), and its correlation with the location of RISC complexes and siRNA and miRNA molecules. These first approaches revealed that a large amount of siRNAs were not loaded into RISC complexes and hence the effectivity of silencing seems to depend only on the few molecules incorporated into RNAi machinery complexes. This finding turned out crucial both for the design of further experimental techniques and for conciliating the results of this work with previous incongruent findings, based on a gross examination of P-bodies and RISC proteins by fluorescence. Stalder and collaborators decided to use procedures based on cell fractionation followed by a precise analysis that permits to identify which proteins are located in the different cellular compartments. They finally concluded that the initial steps of RNAi take place at the cytosolic side of the rough endoplasmic reticulum (rER). Corroborating this notion, argonaute2 protein was found to be normally attached to membranes, explaining the facility of locating the other components at the ER membrane. Further experiments defined that not only physical interaction, but also the first catalytical reactions of slicing, occur at this precise location and moment, and disruption of the location strongly affects the overall kinetics of the gene silencing process.

Let’s stop and take an overview of the cell, bearing in mind these novel notions. After introducing the siRNA that will target and destroy the expression of our target gene, it will spread throughout the whole cytosol, but only those molecules that get to the ER will face the nascent RISC complex. It happens that the ER is the place where proteins are constructed, and it has been shown that mRNA is abundant in the immediacies of this huge cellular structure (remember that rough ER gets its name because it is filled with ribosomes, responsible for converting mRNA into proteins). Thus, it is not striking that the RNAi machinery attaches to this particular location in order to precisely and efficiently find the target mRNAs that will be cleaved, impeding them to produce the corresponding proteins. Efficiency of RNA interference depends on this particular location, and the oddities of all the RNAi material dispersed around the rest of the cell (including the ubiquous P-bodies), when only a small portion of siRNA is required for gene-knockdown purposes, are explained.

Our vision of the cell interior becomes richer and more complex, as does the regulation levels of the mechanisms linking genetically encrypted information to the physical manifestation of all features of living organisms. Life is far more complex than we initially expected, but the good news is that we keep learning. And this information evolves and gradually redefines itself: we have already assumed that DNA may be the most famous nucleic acid ever; but now we are starting to think that RNA is probably the most versatile.

The benefits of recycling: neuron plasticity promoted by histone turnover

It’s not an infection, it’s an invasion!: An army of exosomes loaded with non-coding RNAs reaches endothelial shores

Life and deeds of RNA (III): RNA processing, neurodegeneration and a rare disease

Life and deeds of RNA (I): William Wallace and the fate of the cell

In how many ways can you fold a strip of stamps?