It is estimated that at least 860 million people live in slums, a number that has been growing by six million a year from 2000 to 2010 (UN-Habitat 2012) 1. The study of slums worldwide is a very complex problem. We have no good model to study their economic performance, no systematic data and no way to test hypotheses properly. We do have, on the other hand, many surveys that collected data for different variables in a sample of slums. The present article summarizes Marx et al. (2013) 2, a study that puts together all the available information to have one of the most complete pictures so far. (I will only cite a fraction of the references, which may be consulted in this main reference.) In a work that shows how good descriptive analysis can be of scientific use, the authors shed some light on three important questions: 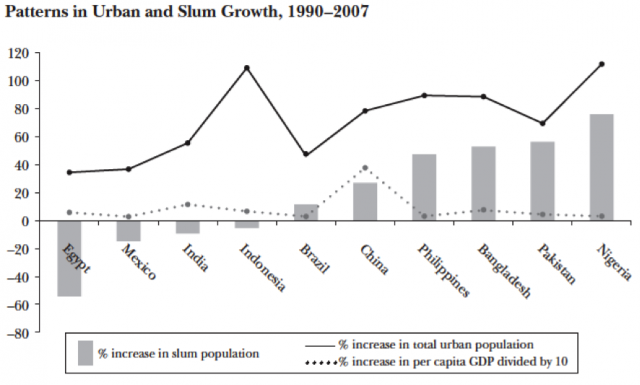 (i) The revealed preference hypothesis

According to this basic economic principle, people from poor rural areas that moved to a slum must be better off, as they freely choose to go there. Indeed, the available studies confirm this hypothesis. Glaeser (2011) 3 provide evidence that the urban poor worldwide are on average richer and happier than their rural counterparts, and Chowdhury et al. (2009) 4 show that seasonal urban migration in Bangladesh can generate welfare improvements for families of migrants. However this does not validate per se the hypothesis of slums being launching pads for upward mobility, as the improvement may not be enough to provide a consistent upgrading of economic conditions along time.

A first fact that becomes clear in the data is that, for many slums, living standards do not seem to be improving over time. For instance, in Kibera, Kenya, census data that measure variables like education, number of rooms per capita and the share of pit latrines, among others, suggest that living conditions have either deteriorated or at best stagnated over the 1999–2009 period, a period during which the economy as a whole grew at 3.5% annually.

Of course, this simple analysis overlooks a selection problem: households that improved their condition may no longer live in the slum, while other poor households may have migrated into it. The available evidence, overall, does not provide evidence of rapid changes in the composition of slums. In the Kibera data, respondent households have lived in the slum for 16 years on average, and incomes do not increase with the duration of residency. In the Bangladeshi settlements, income per capita correlates negatively with the total number of years that that household has spent in the slum and with the number of years since the households first left the countryside. Similarly, UN-Habitat (2003) 5 reported that 41 percent of Kolkata slum dwellers had lived in slums for over 30 years, and more than 70 percent had lived in slums for over 15 years. In a case study of Bangkok slums, 60 percent of individuals were reportedly born in the same slum.

The notion of slums being a poverty trap implies that households do not necessarily move there planning to stay, but instead get caught in a low-level equilibrium. The APHRC (2013) 6 data does speak to this: very few slum residents moved, only about 15 percent, and one-third of these stayed in slum areas.

On the causes that make slums poverty traps, the authors collect data on health, investment and policy indicators, providing a picture that is consistent with the theoretical economic models of poverty traps as described in Azariadis and Drazen (1990) 7 and reviewed empirically in López-Casanovas et al. (2005) 8, Bleakley (2010) 9, and Currie and Vogl (2013)10 . The health indicators show a very low dwelling size, very high population densities, community taps shared by dozens of families, a high percentage of toilet sits infected, and life expectancy lower and infant mortality higher than in rural and no-slum areas. In fact, a very high number of household report one member being ill in the previous month.

The investment indicators show that most slum inhabitants do not own their place and pay a high portion of their income as rent, and that simple improvements are relatively expensive. Public investment is very difficult as the interests of the slumlords, who control the land and housing markets and very often are local bureaucrats, gang members or drug dealers, are not aligned with the interests of the silent majority of slum dwellers. In addition, slums are not usually eligible pro urban planning, and their populations are undercounted. Finally, slums are subject to the Torado (1976) 11 paradox: living standards cannot be improved without generating an additional influx of rural migrants, which in turn depresses public and private investments in the existing settlements.

The writings of De Soto (2000) 12 were influential in refocusing the slum debate towards issues of land tenure and land rights. De Soto argued that giving the poor property titles over their land would provide collateral for millions of poor urban households across the developing world. In fact, the positive relationship between tenure security and investments in land has been well documented in the empirical literature for rural settings. However, few academic studies have looked at the impact of urban titling programs on the investment decisions made by households in slums.

Marx et al. (2013) are not optimistic and provide evidence that land titling may not work as desired. Most land owners live outside the slum and seem to have no problems having their informal rights over the renters strongly enforced (Syagga et al., 2002 13). Palmer (1998) 14 pointed out how the effectiveness of land titling programs actually depended on whether they could achieve an increase in the total security that poor households enjoy. More interestingly, Durand-Lasserve et al. (2007) 15 reviewed evidence from land titling projects that may have actually decreased tenure security (because they allowed for lawfully enforced evictions) in Afghanistan, Cambodia, Egypt, India, and Rwanda.

Past approaches to slums tried to reduce their population with evictions and neglect. The idea was to discourage migration to the slum and encourage people to leave. By the 1970s it was clear that these measures did not work and policies for upgrading the slum took place. However, initial enthusiasm of upgrading projects began to dwindle by the late 1980s as slums continued to expand and the basic infrastructure improvements appeared unsustainable.

The experience of countries that managed to curb the growth of slums, such as Brazil or Egypt (see Figure), appear to be those where slum policy relied on a combination of instruments rather than focusing on a single one —including efforts to increase the transparency and efficiency of land markets, to improve local governance, to increase public investments massively, and to increase the supply of cheap housing (UN-Habitat 2010 16).

The value of a statistical life