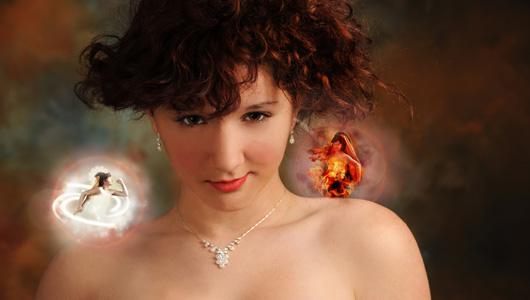 One of the most classical problems in philosophy is the existence and nature of free will. Though the growth of our scientific knowledge about the brain, and about the universe in general, is making the notion of ‘free will’ less and less tenable, it seems that the major difficulty becomes to reconcile this idea with a naturalistic vision of nature, the most important effort is devoted by defenders of free will to find arguments that could allow to accept its existence, desperately looking within the ‘mysteries’ of quantum mechanics or within a systemic conception of the brain, some hideouts where this venerated and elusive property may resist the buffetings of the naturalistic tide.

In order to count as not-merely-apparent explication of the idea of free will, any scientific or philosophical account of it must respect these two fundamental theses:

There is an old argument (the skeptical argument) against the compatibility of these two properties: either physical determinism is true or it is false; if determinism is true, then possibilism is false; if determinism is false, then non determined events happen by chance, and hence those decisions of us which are not determined by the physical laws happen by chance, and we are not the ‘authors’ of then in the sense of the ultimate control thesis. Hence, free will is impossible. Traditionally, defenders of free will have resorted to basically three strategies: either claiming that free will is really compatible with determinism (compatibilism), or that it is compatible with indeterminism (libertarianism), or that the dichotomy determinism-indeterminism is inappropriate (there is not a common label for this strategy; for example, Kant’s theory of freedom could be included here)*. The only other position, which is the one I will adopt in this series, is just to accept the argument as it is, and deny that free will (in the sense of the combination of possibilism and ultimate control) is a legitimate notion to understand our actions. I will not concentrate, however, in examining the arguments against the other three strategies, but on something that I think is more interesting from a biological point of view: why it is that we have so a convincing feeling or impression of having something like free will; i.e., why we instinctively tend to believe that 1 and 2 are true. After all, our having this impression is a non-problematic psychological or neurobiological fact (at least, not more problematic than any other mental state or happening, if we just ignore by now the so called ‘hard problem’ of consciousness, to which I will probably devote some future entries), not clearly contradicting deep features of the physical laws as thesis 1 and 2 seem to do. It is possible to ask, hence, about both the neurophysiological basis of that impression, and about the evolutionary advantage that having the capacity of experience such feeling may have provided to our ancestors.

Nevertheless, before entering into that question in the next entry, I shall briefly discuss about what cannot be the cause (in a naturalistic worldview) of our feeling of ‘being free’, and how we cannot find that cause. Regarding the latter, we must not confuse the event of decision taking with our experience of that event; it is as if we wanted to know the ‘nature of heat’ just by analysing our phenomenological feeling of heat; our feeling of deciding need not have any special resemblance with what deciding consists really in. As in the case of heat, the only important thing, from an evolutionary point of view, is that we have the sensation of heat in the presence of hot bodies (not of cold objects), or the feeling of being deciding something when we are deciding something (not when we do something involuntarily, for example); but nothing in the phenomenological content of those sensations need to have any similarity with the real physical processes (the energy of vibrating particles, the firing of certain neurons) those feelings have. If we take this into account, we will immediately conclude that most of the arguments on the literature on free will are dubious, just because they are based on how the experience of deciding (its ‘phenomenology’) intuitively manifests to us: we feel we have ‘authority’, we don’t feel ‘compelled’, we feel we have different alternatives to choose between, etc.; but there is no reason at all to assume that these feelings are more informative about the real causal processes underlying decision making than the feeling of heat about the atomic nature of matter and the notion of mean kinetic energy of molecules.

Regarding the possible causes of our impression of being ‘free’, and in particular, our impression of the future being ‘open’ in front of us (i.e., the impression that possibilism is true), it is also important to notice that there is absolutely no causal link, compatible with the known laws of physics, that takes as input the truth of possibilism (i.e., the -conjectured- real existence of alternative futures), and gives as output our supposed experience of those possible futures. Perception is always a causal process that transmits information from some event in the past, and has as its effect a particular neural state, that of perceiving something (of course, many aspects of this process can lead to cases of misperception). But in the case we are dealing with now, we feel there is not something in the past, but in the future, for example, my possibility of staying seated during the next minute, or the possibility of standing up. Perhaps some can counter argue that this is not really a case of perception, but of (intellectual) inference: I conclude, by induction on my past experience, that in the next future both possibilities are open. But, first, I think that, phenomenologically speaking, this is not an inference, but some immediate intuition: I feel that I can do one thing or the other. And, second, and more importantly, nothing in my past experience has shown anything about possibilities: I have never (nor can) experience something like a (mere) ‘possibility’, only actual occurrences. It is a much simpler explanation the one according to which it is mere uncertainty what drives me to feel dubious about the future and hence experience (logically) alternative events as equally possible.

Je ne regrette rien (3): The chimera of a quantum ‘solution’ to the problem of free will

Je ne regrette rien (and 4): Freedom and the regret connection