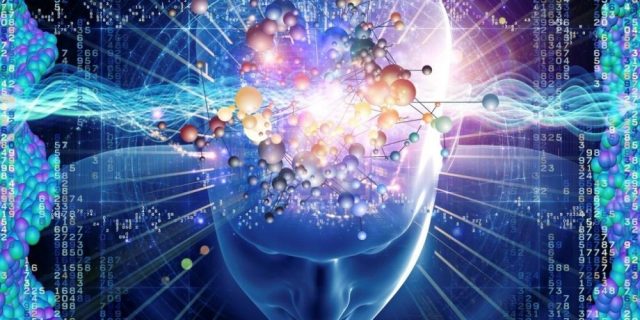 The mysteries of quantum physics have been breeding ground for thousands of attempts to connect any kind of weird hypotheses to ‘science’. The underlying inferential schema in all these attempts seems to be something like the following:

In spite of the obviously fallacious nature of this schema, the free will debate has been one of the fields in which it has been more thoroughly applied. A good resume of the main ideas supporting the possible connections between quantum mechanics (QM) and free will (or consciousness, in general) is the following1:

“(1) the orthodox interpretation of QM involves a measure of irreducible indeterminism in the development over time of systems in the world. Also, (2) QM contradicts the causal locality and reductionism of classical physics which is still generally assumed in the broader scientific orthodoxy, thus opening up the possibility that an agent’s conscious mental activity could act holistically in exercising a causal influence not fully explicable from a physical viewpoint. And (3) the mathematics of QM links not objective events but observations of events; so that the participation of conscious subjects is presupposed, and the total dependence of consciousness upon matter, which is assumed in the scientific orthodoxy, is thus put into question.”

I think no one of these three thesis is appropriate, either because of falsity, or because their irrelevance for the free will debate. Regarding (1), indeterminism (even if it were the ultimate truth about the evolution of the physical world) is per se no argument in favour of free will, both because there are reasons to think that indeterminism is incompatible with really free decisions (by transforming them in just random decisions; would I be free if my decisions ultimately consisted in an homunculus tossing a coin each time I have to decide something?), and because there are important versions of the concept of free will (even old classical ones, like, e.g., Spinoza’s or Kant’s) that assume that free, rational decision making processes are deterministic (according to these theories, freedom has more to do with rational consciousness than with unpredictability, and hence the philosophical problem is not just how can the mind ‘choose’, but how it can have ‘ultimate control’, even in a process that should be deterministic, like following a logical or mathematical argument; i.e., the problem from these theories’ point of view is how the mind is able of capturing something like ‘abstract truth’ in spite of neuronal connections being more or less random).

Regarding point (2), I just know of no acceptable argument showing what the connection between the ‘causal holism’ (to use that obscure name) that is related to the physical phenomena of entanglement, non-locality, Bell inequalities, etc., has necessarily anything to do with the mind, and in particular, with the ‘mental holism’ that we can associate with the phenomenological ‘unity of consciousness’ and/or ‘unity of agency’. This is a trivial conclusion from the fact that we just have nothing like a physical (not to say a quantum) description of the working of the mind. Compare this case with other attempts to apply quantum physics to our understanding of difficult phenomena, like chemical bonds or neutron stars: what we needed in cases like these was a way of showing that some equations derived (even with ‘adjustments’) from quantum mechanical laws were able to generate as mathematical predictions some laws we can empirically test about the behaviour of chemical molecules or about some radio-telescopic observations. Only in these cases are we legitimate to assert that we have a ‘quantum explanation’ of something (even a tentative one). But, where are the ‘empirical laws’ about the mind and its causal, holistic properties? Where are the quantum-mechanical formulae we could directly test against those laws? Obviously, they are just nowhere2.

I am equally sceptical about point (3). Without denying that the ‘measurement problem’ is certainly a deep question puzzle in the philosophy of quantum mechanics, I doubt that it has necessarily anything to do at all with consciousness. The fact that we, humans, make measurements through behaviours that, in our case, are accompanied by, and linked to, ‘conscious states’ is a mere accident that, in principle, has absolutely nothing to do with quantum mechanics (nor, by the way, with any other scientific theory distinct from psychology). Experimental settings and quantitative measurements of quantum phenomena could in principle be performed by aliens constituted in a very different way as we are, or just by robots, both lacking our type of ‘consciousness’ in the phenomenological sense, but the quantum mechanical laws they would end accepting on the basis of those experiments and measurements would ideally be the same laws we have. Some may reply that there is no way of knowing whether those aliens/robots would really have ‘collapsed the wave functions’ till a human goes and sees their apparatuses or the journal in which their results have been published… but the truth is that exactly the same can be asserted about human physicists: how do I know that the wave functions have really collapsed in a double slit experiment before I notice the results? I just do not know, but have no option save trusting the scientists as informants, and there is no reason why I could not trust exactly to the same extent the alien/robot researchers/informants. Hence, measurement is surely an interesting and difficult problem in quantum physics, but there is absolutely no reason to think that human minds (nor even minds, generally) have anything relevant to do with it.

Lastly, we have to refer to the attempts to point to some specific ‘quantum processes’ that indeed take place in the brain and that may hopefully explain some of the peculiarities of human consciousness and decision making. The British scientists John Eccles and Roger Penrose have been two of the leading figures in this approach3. We cannot deny that quantum processes occur in the brain (after all, if quantum mechanics is correct, quantum processes occur just everywhere), nor that some properties of the neurons’ physiology are only explainable thanks to quantum laws (as, in general, are the properties of all chemical molecules, starting from the fact that the chemical bonds are just not explainable in classical terms). But the fact that all the alleged processes are at the level of neurons, or even at the level of individual synapses, makes us suspect that they have probably nothing to do with human consciousness, rationality, or decision making. For the hard fact is that the physiology of neurons and synapses is exactly the same in almost all the animal kingdom, and even the anatomic structure of the brain is considerably similar (considered from the quantum level point of view) in all mammals. Eccles’ and Penrose’s conjectures leave unexplained how it is that it needs a human brain to have the capacity of behaving in a way that is not reducible to instincts or to classical or operant conditioning, but that manifests something like ‘rational decision making’. It seems obvious to me that it must be something essentially related to the anatomical architecture of the human brain, and not only to their chemical substructure, what has to account for those manifest behavioural differences between humans and animals that allow us to say that the former have free will and/or consciousness in a sense the latter have not.

Je ne regrette rien (and 4): Freedom and the regret connection