The success of Bohr’s model of the atom in accounting for the spectrum of hydrogen left this question: Could experiments show directly that atoms do have only certain, separate energy states? In other words, are there really gaps between the energies that an atom can have? A famous experiment in 1914, by the German physicists James Franck and Gustav Hertz (a nephew of Heinrich Hertz), showed that these separate energy states do indeed exist.

Franck and Hertz bombarded atoms with electrons from an “electron gun,” a hot wire that emitted electrons which were then accelerated through a hole leading into an evacuated region where they were aimed at a target. Franck and Hertz were able to measure the energy lost by the electrons in collisions with the target atoms. They could also determine the energy gained by the atoms in these collisions.

In their first experiment, Franck and Hertz bombarded mercury vapor contained in a chamber at very low pressure. The procedure was equivalent to measuring the kinetic energy of electrons on leaving the electron gun, and again after they had passed through the mercury vapor. The only way electrons could lose energy was in collisions with the mercury atoms. 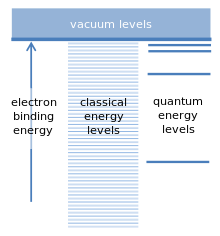 What happens to this extra 4.9 eV of internal energy? According to the Bohr model, this amount of energy should be emitted as electromagnetic radiation when the atom returns to its lowest state. Franck and Hertz looked for this radiation, and they found it! They observed that the mercury vapor, after having been bombarded with electrons, emitted light at a wavelength of 253.5 nm. This wavelength was known to exist in the emission spectrum of hot mercury vapor. The wavelength corresponds to a frequency f for which the photon’s energy, hf, is just 4.9 eV (as you can easily calculate). This result showed that mercury atoms had indeed gained (and then radiated away) 4.9 eV of energy in collisions with electrons.

Later experiments showed that mercury atoms bombarded by electrons could also gain other sharply defined amounts of energy, for example, 6.7 eV and 10.4 eV. In each case, the subsequently emitted radiation corresponded to known lines in the emission spectrum of mercury. In each case, similar results were obtained: the electrons always lost energy, and the atoms always gained energy, both only in sharply defined amounts. Each type of atom studied was found to have separate energy states. The amounts of energy gained by the atoms in collisions with electrons always corresponded to the energy of photons in known spectrum lines. Thus, this direct experiment confirmed the existence of separate stationary states of atoms as predicted by Bohr’s theory of atomic spectra. This result provided strong evidence of the validity of the Bohr model.

Frank and Hertz received for this work the Nobel Prize in Physics 1925.

Dark states can be much better excitation carriers