No matter how the layout of the periodic table may be, there are elements that are always grouped together. This is easy to understand; let’s take for example the standard form of the table (due to H.G. Deming). In this layout each group, each vertical column in the table, has more significant periodic trends than periods (horizontal rows) and blocks (main divisions). Modern quantum mechanical theories of atomic structure explain group trends by proposing that elements within the same group have the same electron configurations in their valence shell. Consequently, elements in the same group tend to have a shared chemistry and exhibit a clear trend in properties with increasing atomic number.

The elements of some groups have such a similar chemical behaviour that they receive a collective name. One of these groups is known as the oxygen family, because oxygen is the element at the upper part of the column, but also as the group of the chalcogens (a traditional name stemming from the Greek khalkos, meaning copper, because copper ores are made of combinations of copper with chalcogens). 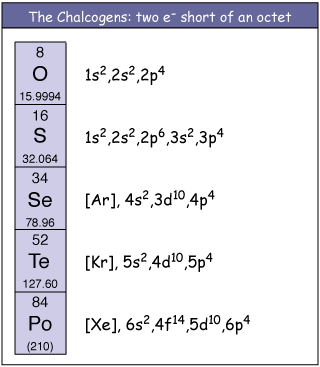 The atoms of the chalcogens have the valence electron configuration ns2np4; n ranging from 2 to 6. Thus, these elements attain a noble-gas electron configuration by adding two electrons, which results in a -2 oxidation state. But, except for oxygen, these elements are extremely versatile and are also commonly found in positive oxidation states up to +6, and they can have expanded valence shells.

The chemistry of the chalcogens is extremely important as we can imagine. For example, metal mediated redox processes of the chalcogens are vital in biological systems, industrial catalysis, and organic electronics, as well as in nanomaterials and semiconductor fabrication.

Two crucial aspects of these important redox processes are the chalcogen−chalcogen bond formation and its cleavage. Let’s consider de S-S bond for a second. The striking ability of sulphur to create chains of atoms, to catenate, is in the very basis of life as we know it. The -S-S- links that connect different parts of the chains of amino acids in proteins are an example of catenation. These “disulphide links” contribute to the shapes of proteins, including the keratin of our hair; thus, sulphur helps to keep us alive and, perhaps, curly haired.

But the important chemistry of chalcogens is still not fully understood when they are linked to transition metals, when a pair of chalcogen atoms may bind in several different oxidation states. Consider, for instance, that unlike the corresponding oxygen compounds, those that contain a singly bonded E−E unit with E = S, Se, or Te are supposed to undergo stepwise, reversible, single-electron transfer reactions that cleave the E−E bond via exotic intermediates

Now, a group of researchers, including Ivan Infante from Kimika Facultatea (UPV/EHU) and DIPC, has accumulated compelling evidence1 that not all oxidation states are possible for chalcogens in M2E2 compounds, where M is a transition metal: oxidation states do not vary continuously, in other words, they are quantized. The results are published in the Journal of the American Chemical Society.

The researchers performed calculations using the density functional theory on an entire series of hypothetical Cp2M2S2 compounds (Figure 2) where the M element was varied across the first row of transition metals from Cr to Zn, and Cp is an organic molecule (a polysubstituted cyclopentane) that stabilizes the structure.

They found that changes in the calculated atomic charges and natural electron configuration values across the series were smooth as expected. But when they plotted the M···M distances against the S···S separations, an unusual trend (Figure 3, top) appeared. Rather than being a continuous curve, the compounds clustered in three distinct categories.

Intrigued by this finding they expanded to catalogue all known first-row transition metal compounds with a planar M2S2 core that are reported in the Cambridge Structural Database, just to find the same pattern (Figure 2, bottom).

Thus, the massive amount of structural data collected to date suggests to the researchers that E2 ligands bind to transition metals in quantized redox states, E2−, E23−, and E22−, rather than displaying a continuum of E−E bonding interactions.