Pain is an unpleasant sensory and emotional experience associated with actual or potential tissue damage. It is the most common reason for physician consultation in most developed countries and after disease/damage of the nervous system is predominantly treated with opioids. Opioids are medications that relieve pain. They reduce the intensity of pain signals reaching the brain and affect those brain areas controlling emotion, which also diminishes the effects of a painful stimulus. Pharmaceuticals that fall within this class include hydrocodone —the most commonly prescribed for a variety of painful conditions, including dental and injury-related pain—, oxycodone, codeine, morphine, and related drugs. Opioids act by attaching to specific proteins called opioid receptors, which are found in the brain, spinal cord, gastrointestinal tract, and other organs in the body. When these molecules bind to their receptors, they reduce the perception of pain, but opioids have side effects and can produce drowsiness, mental confusion, nausea, constipation, and, depending upon the amount of drug taken, can depress respiration. 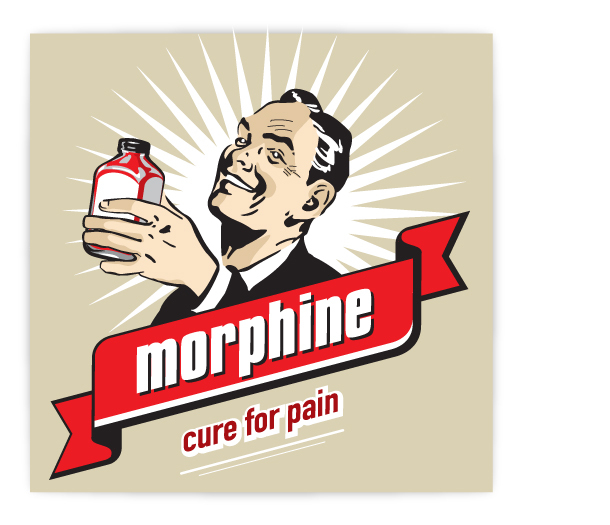 Morphine is often used before and after surgical procedures to alleviate severe pain. It is the most commonly used opioid and can be taken for pain relief as a liquid by mouth, as quick-acting tablets, or as slow-release tablets and capsules. However, the long-term consequences of opioid prescription have not been explored and this can be troublesome since opioids are documented to paradoxically induce nociceptive sensitization, both in the presence and absence of a pain condition. Contrary to what can be expected, morphine treatment after a nerve injury doubled the duration of pain in rats, scientists report in the Proceedings of the National Academy of Sciences. 1 This has not been previously anticipated. 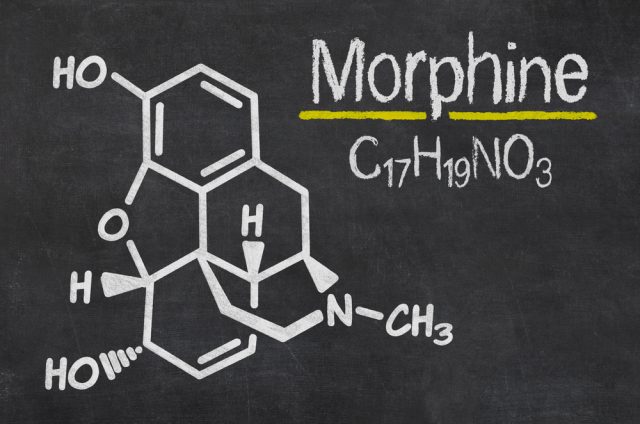 Male rats underwent surgery in which their sciatic nerves, which run down the hind legs, were squeezed with a stitch, a constriction that causes pain afterward. Ten days after surgery, rats received a five-day course of either morphine or saline. Scientists have known that opioid-based drugs can cause heightened sensitivity to pain for some people, a condition called opioid-induced hyperalgesia. The new study shows that the hyperalgesia effects linger months after use of the drugs is stopped, i.e., morphine induces persistent nociceptive sensitization after peripheral nerve injury. To determine whether opioid receptors mediated persistent sensitization, the μ-, κ-, and δ-opioid receptor-inactive stereoisomer (+)-morphine was administered in lieu of (−)-morphine. (+)-morphine recapitulated persistent sensitization, demonstrating that this effect can occur independently of classical opioid receptors. The initiation and maintenance of this persistent prolongation of neuropathic pain were mediated by a previously unidentified mechanism.

Using genetic and pharmacological interventions, and innovative Designer Receptor Exclusively Activated by Designer Drugs disruption of microglia reactivity, the authors demonstrate that opioid-prolonged neuropathic pain arises from morphine-induced spinal microglia, NOD-like receptor protein 3 inflammasome formation/activation, and associated release of interleukin-1β (IL-1β). Inhibiting these processes permanently resets amplified pain to basal levels, an effect not previously reported. These data support the “two-hit hypothesis” of amplification of microglial activation—nerve injury being the first “hit,” morphine the second. Apparently, the immune system sees morphine as a threat, the researchers suspect, and responds by revving up inflammation through microglia. Such potent microglial “priming” has fundamental clinical implications for pain and may extend to many chronic neurological disorders. These findings are in agreement with prior studies showing that repeated immune challenges induce a transition from acute to chronic pain, which may also underpin pain comorbidities.

The results raise the troubling prospect that in addition to having unpleasant side effects and addictive potential, opioids could actually extend some types of pain. If a similar effect is found in people, one aspect that has to be studied yet, it suggests that the treatment is actually contributing to the problem 2. Clarity on how opioids influence pain could change doctors’ prescribing habits and encourage the search for better pain treatments. Nevertheless, many questions are still open. Researchers don’t yet know whether all opioid-based painkillers would behave like morphine. However, the authors provide a unique strategy to prevent and reverse the deleterious long-term effects of opioid treatment without compromising morphine analgesia; μ-opioid receptor-mediated analgesia can be maintained, while simultaneously eliminating inflammasome-mediated persistent sensitization. The procedure(s) by which inflammasomes remained activated after cessation of morphine is a challenge for further investigation.

Cell therapy as a cure for chronic pain

I see your pain