Estibaliz Capetillo-Zarate got her Ph.D. from Bonn University in 2006. Since 2007 she has worked for the Weil Cornell Medical College. Currently she is an Ikerbasque Research Fellow affiliated to UPV/EHU and the Achucarro Basque Center for Neuroscience. She investigates the role of neurons and microglia in Alzheimer’s disease. 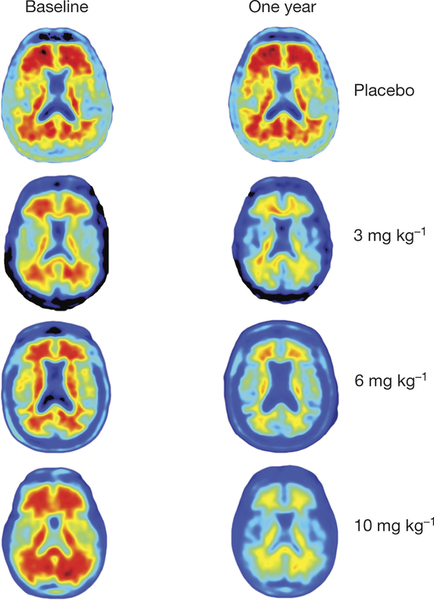 We might be still a bit far from that, but we are a step closer considering a recent publication in Nature 1

Progressive memory loss is the main recognizable manifestation of cognitive decline associated with Alzheimer´s disease. Amyloid hypothesis postulates that amyloid-β, a protein present as monomer in healthy brains, pathologically accumulates in the brain, both in soluble and insoluble aggregates, and triggers the disease and the subsequent cognitive decline associated with it 2.

Since the first clinical trial reported in 2003 aimed to target amyloid-β by antibody-based immunotherapy, much effort and money has invested to find a successful treatment for this fatal disease. More than 20 trials with the purpose of clearing amyloid-β and its toxicity have failed in preclinical, phase 1, 2 or 3 trials. Among many possible reasons for the lack of success of those trials, one of them might lie on the selected patient population. In many of those studies patient population were diagnosed with at least moderate Alzheimer´s disease. For the last decade, advances in biomarkers that detect physiological changes before manifestation of clinical symptoms have allowed the establishment of a patient population in early stages of the disease, considered as prodromal (showing early symtoms) and mild Alzheimer´s disease, allowing trials in early stages of the disease and providing a larger window for treatment and, hopefully, for recovery.

The work co-led by Sandroock from Biogen Company in US and Nitsch from Neuroinmune and the Institute for Regenerative Medicine in Switzerland reported the results of a preclinical and phase 1b clinical trial with aducanumab, a human monoclonal antibody that reacts with soluble and insoluble amyloid-β aggregates. First co-authors Sevigny, Chiao, Bussière and Weinreb reported on one hand results from a preclinical study that provided enough relevant data to initiate a clinical trial. This preclinical study with a single dose (30mg/kg intraperitoneal) of aducanumab in a 22 month-old Alzheimer mouse model (Tg2576) showed that aducanumab penetrates the brain and binds mainly to parenchymal amyloid-β plaques and not the ones around to the blood vessels. Significant reduction of all type of amyloid-β plaques was observed without affecting vascular deposits. Ex-vivo phagocytosis data supported the involvement of microglia, the immune cells of the central nervous system behind the mechanism of amyloid-β clearance by aducanumab. Biochemical characterization of the aducanumab showed more than 10,000 fold selectivity for aggregated amyloid-β over monomers.

Next logical step for aducanumab was to move into a clinical trial. The phase 1b clinical trial reported in this paper was designed to investigate the safety, tolerability, pharmacokinetics, and pharmacodynamics of aducanumab. The population of the study consisted of 165 patients from 33 sites of US, clinically diagnosed with prodromal or mild Alzheimer´s disease and visualized positive with amyloid-β using a Positron Emission Tomography (PET) scan. Patients were monthly intravenously administered a placebo or aducanumab at 1, 3, 6 or 10mg/kg doses for one year. Brain amyloid-β was measured by Florbetapir PET imaging. Florbetapir is PET scanning pharmacological compound approved as diagnostic tool for Alzheimer´s disease by the FDA (US Food and Drug Administration), entity in charge of drugs approval in the US.

PET results showed a dose- and time-dependent reduction of brain Aβ plaques after aducanumab treatment. Significant amyloid-β reduction was already seen after 6 months of treatment. This study was not run to detect clinical changes and therefore clinical assessment has to be considered exploratory. Even so, both Clinical Dementia Rating (CDR) and Mini Mental State Examination (MMSE) showed a dose dependent slowing of clinical progression after a year treatment with the greatest effects with the highest dose (10mg/kg). Most common adverse events were Amyloid Related to Imaging Abnormalities (ARIA), headache and urinary and upper respiratory tract infections, and no drug related death was reported.

In summary, authors reported reduction of both soluble and insoluble aggregates of amyloid-β in the brain of patients with prodromal or mild AD and, what is even more exciting, a clinical benefit after a year treatment with aducanumab. These findings point to to a cognitive improvement upon amyloid-β removal, thus strengthening the amyloid hypothesis.

These results are promising but they should be taken with caution. Reported data is from a study in phase 1b, that is, it was mainly focused on checking for tolerance, safety and pharmacokinetics of the drug. However, considering that this study has gone from a phase 1b to a phase 3 without stepping much in a phase 2, shows the relevance of the findings for the FAD. An increment of the population of the study and the time of the trial will be key to prove the effectivity of the long term treatment in a larger and representative population. Additionally, evaluation of cerebrospinal fluid (CSF) biomarkers (like amyloid-β, tau protein or inflammatory markers) under the aducanumab treatment might support these measurements as early biomarkers for the Alzheimer´s disease prediction. The scientific community is looking forward for the next results from the ongoing long-term extension phase of this study and phase 3 clinical trials that might confirm the slowing of the clinical decline by aducanumab.