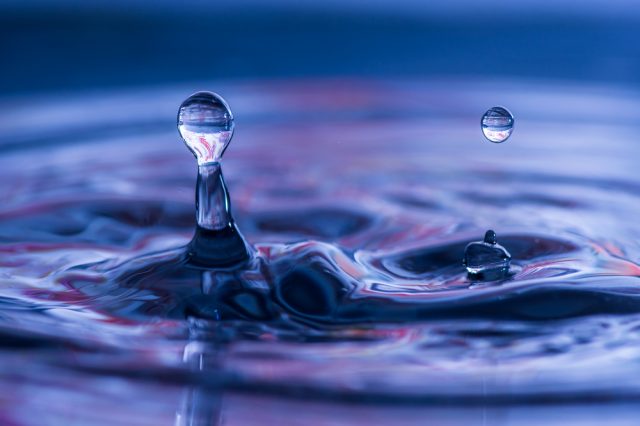 The importance of water is paramount. Life, as we know it, would be unthinkable without it. Not only that, the geology of our planet, and those of other planets, can not be properly understood without a knowledge of how water behaves. Most chemical reactions on the surface of Earth, natural or industrial, involve water molecules, one way or the other. Still, what we do not know about the microscopic behaviour of water is breathtaking.

Now a team of researchers from CFM (CSIC-UPV/EHU), UPV/EHU and Institut Laue-Langevin coordinated by Juan Colmenero, from DIPC and CFM, has used 1 the combination of two spectroscopic techniques to reveal, experimentally, what microscopic mechanisms are implicated in the dielectric response of water. This combination of techniques had been used before, but only with qualitative results; this is the first time that a quantitative study is produced.

The authors combine results from two kinds of measurements to figure out the dynamics of water at room temperature. On one hand dielectric relaxation experiments give information about how electrical dipoles behave collectively, what results in the macroscopic dielectric response of water. On the other hand, neutron scattering experiments have an atomic-scale sensitivity, and can follow both local atomic motions and larger-scale collective dynamics. This is possible thanks to how the the different isotopes of hydrogen nuclei interact with neutrons 2: scattering by standard hydrogen atoms is incoherent and related to the individual motions of hydrogen atoms but not to the liquid’s structure or collective dynamics; but deuterium (D) atoms produce a predominantly coherent scattering due to the collective motions. By comparing experiments on light (H2O) to heavy water (D2O) you get separate individual and collective information.

With these data, the scientists were then able to establish a relationship between molecular dynamics and the dielectric behaviour of water. They recognize the presence of two relaxational dynamic processes in liquid water, one related to the diffusion of molecules and the other to local movements associated with the making and breaking of hydrogen bonds.

This result for water at 20ºC is just the beginning of an experimental study of the microscopic dielectric behaviour of water at different temperatures. But not only that, also opens a new way of approaching water dynamics under different conditions (supercooled, confined, etc.) and that of other hydrogen-bonded liquids.

Author: César Tomé López (who acknowledges the comments and suggestions from Arantxa Arbe and Juan Colmenero in preparing this text).

Some non-biological materials move as proteins do: the role of water

Effects of defects and water on perovskite solar cells

Cod ‘supergenes’ reveal how they are evolving in response to overfishing

How water molecules penetrate salt crystals, seen one at a time.