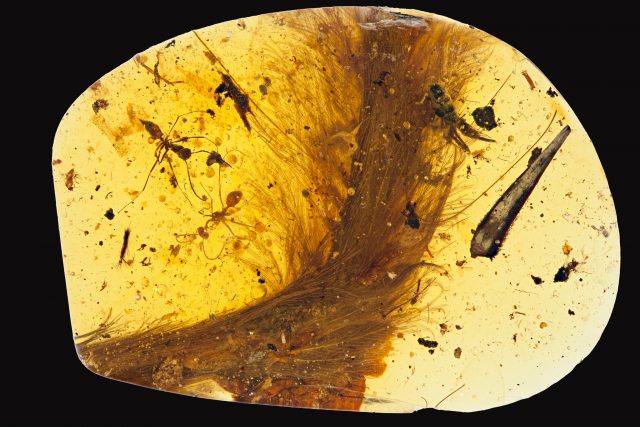 The feathered tail of a tiny nonavian dinosaur that lived 99 million years ago has been found encased in amber. Soft tissue and eight vertebrae were preserved in the amber along with the tail, allowing researchers to determine it likely belonged to a young theropod.

Researchers are synthesizing calcium-silicate-hydrate particles to custom design cement. The process creates different shapes of C-S-H that can pack together more densely, which helps make the concrete stronger, more durable and less porous.

A benign tumor found in the jaw of an ancient relative of modern mammals is the oldest example of compound odontoma yet found. The tumor, which is made of tiny tooth-like objects that grow in clusters in soft tissues of the jaw, would have been very painful for the gorgonopsian 255 million years ago, when it was roaming what is now Tanzania.

Researchers mixed graphene and Silly Putty to create an electrical sensor so sensitive, it can detect spiders walking across it. The putty was also used to monitor a person’s pulse, blood pressure, finger motions and breathing.

Atlantic killifish have adapted to live in toxic waters

Four separate sets of resilient Atlantic killifish have adapted to live in the polluted waters of places listed by the US Environmental Protection Agency as toxic Superfund sites. Researchers found a genome mutation linked to an immune system pathway in the separate killifish populations.