Faster. That is the word that describes de evolution of electronics. Any new development has to be faster than anything before, if it is going to cope with the huge amount of information that the device where it may be incorporated will have to process in almost no time. Graphene has just demonstrated once again that it is the wonder material: it is able to deal with extremely high electrical densities without structural damage in femtoseconds, i.e., in almost no time. 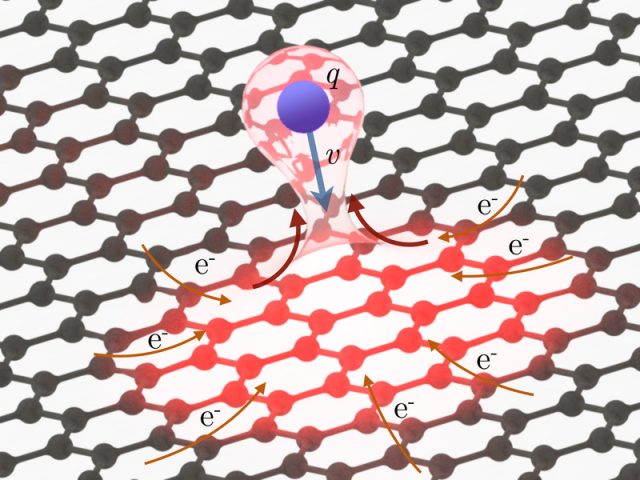 An international research team, formed by both theorists (DIPC-CFM-UPV/EHU Donostia and CNRS Paris) and experimentalists (Helmholtz-Center Dresden-Rossendorf, University of Duisburg-Essen and TU Wien), was able to prove1 that electrons in graphene are extremely mobile and react very quickly to an ultrahigh electric field.

In the experiments, xenon ions, with initial positive charges up to +35, impact on a graphene single layer film producing a large number of electrons to be torn away from the graphene in a very precise spot.

The highly charged Xe ions, as they are approaching the film, start tearing electrons away from the graphene due to their extremely strong electric field. By the time the ion has fully passed through the graphene layer, it has a positive charge of less than +10, compared to over +30 when it started out. The ion is able to extract more than 20 electrons from a tiny area of the graphene film. This means that electrons are now missing from the graphene layer, so the carbon atoms surrounding the point of impact of the xenon ions are positively charged.

Surprisingly, the passing ion does not tear nanometre-sized holes into the single layer graphene. The exceptional electronic properties of graphene allow for a resupply of charge and distribution of the impact energy promptly enough to prevent a Coulomb explosion in the electron-depleted region.

For example, while passing through graphene, a xenon ion with an initial charge of +30 captures ∼25 electrons on a timescale of a few femtoseconds. Based on the experimental data, a lower bound for the current densities reached locally within a nm2 area is at least 1012 A cm−2 exceeding the breakdown current densities reported so far, 108–109 A cm−2 , by three orders of magnitude.

Graphene behaviour remind us of the Olympic motto: “Citius, Altius, Fortius” (Faster, Higher, Stronger). The theoretical simulations using time-dependent density functional theory (TDDFT) showed that graphene is able to replace the electrons within some femtoseconds, implying that extremely high currents are produced. Actually, the current density is around 1000 times higher than that which would lead to the destruction of the material under normal circumstances – but over these distances and time scales, graphene can withstand such extreme currents without suffering any damage.

This extremely high electron mobility in graphene is of great significance for a number of potential applications, like the construction of ultrafast electronic devices or connecting optical and electronic components.

The ultrafast dynamics of adsorbates deciphered