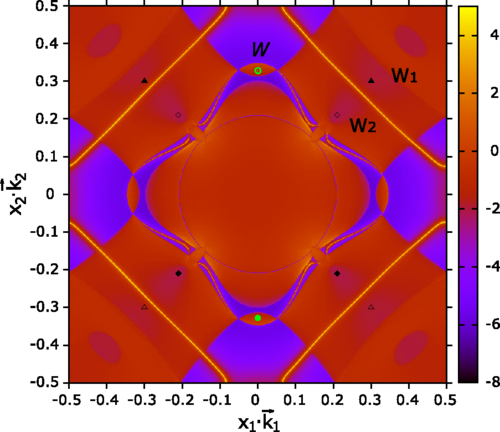 Imagine there exist a material in which an electron could be split into two quasiparticles. These two quasiparticles both would carry electric charge, move in opposite directions but could not move backwards. Furthermore these quasiparticles would be massless. And we can give them a fancy name, Weyl fermions.

Weyl fermions and their properties make them very interesting objects from the practical point of view. To start with, Weyl fermions no mass implies they can move faster than electrons do, carrying charge with them, inside electronic systems. Furthermore, if they cannot move backwards they cannot bounce away from obstacles, meaning that they will have to zip through or around roadblocks; not like electrons, that can scatter backward when they collide, making their flow less efficient and generating heat.

Back in 1929, theoretical physicist Hermann Weyl predicted the existence of a new elementary particle with intriguing properties. Specifically, it would be massless (like a photon), have half-integer spin (like an electron) and exist in two mirror-image versions (like left- and right-handed gloves)—a property known as chirality. In 2015, scientists finally detected Weyl fermions within in large crystals of tantalum arsenide (TaAs).

Particles such as the famous Higgs boson are often detected in the aftermath of high-energy particle collisions, but in a study published in June that year the researchers theorized that Weyl fermions could exist in certain crystals known as “Weyl semimetals,” which can essentially split electrons inside into pairs of Weyl fermions that move in opposite directions.

The researchers noted these Weyl fermions are not free-standing particles. Instead, they are quasiparticles that can only exist within those crystals. In other words, they are electronic activity that behaves as if they were particles in free space. By shining beams of ultraviolet light and X-rays at TaAs crystals, the researchers detected the telltale effects of Weyl fermions on those beams.

Still, these TaAs compounds may not be the ideal Weyl semimetals. Actually, the TaAs family of compounds exhibits 24 Weyl nodes, due to several other mirror symmetries. This large number of Weyl nodes gives rise to complicated spectroscopic and transport properties. By comparison, the hypothetical hydrogen atom of Weyl semimetals is a material with only 2 Weyl nodes close to the Fermi level and cleanly separated in energy from other bands.

Now, a team of researchers, that includes Maia G. Vergniory and Eugene Chulkov, from DIPC, predict1, for the first time, a series of compounds that can exhibit, when alloyed, two Weyl points close to the Fermi energy and largely separated.

The so-called magnetic Heusler compounds have several advantages over the other compounds where Weyl fermions have been proposed and detected. First, they are ferromagnetic half-metallic compounds with Curie temperatures up to room temperature, meaning they can be most appropriate for spin manipulation and spintronics applications.

Second, they exhibit Weyl fermions, with the particularity that the anomalous Hall effect and the spin Hall effect in these materials are theoretically expected to be large, something that has already been confirmed in initial experimental studies.

And third, since the structure and position of Weyl fermions depends on the magnetic field, and in the magnetic Heusler alloys an applied magnetic field can easily change the magnetic moment direction, these compounds provide us with a realistic and promising platform for manipulating and studying the magnetic Weyl physics in experiments. 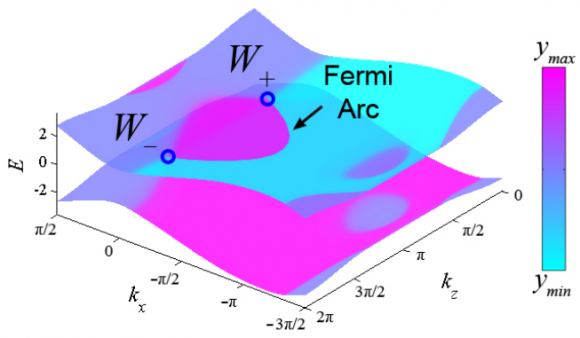 The researchers performed ab initio calculations of a representative ferromagnetic compound ZrCo2Sn, then doped it with Nb showing that the two Weyl nodes present in the first one can be shifted to the Fermi level. Finally, they obtained the Fermi arc structure of this class of materials.

This discovery shows a way to realize the hydrogen atom of Weyl materials and provides a promising platform for studying exotic properties of magnetic Weyl fermions in experiments.

Non-magnetic in the bulk, strongly ferromagnetic at the surface