Back in 1929, theoretical physicist Hermann Weyl predicted the existence of a new elementary particle with intriguing properties. Specifically, it would be massless (like a photon), have half-integer spin (like an electron) and exist in two mirror-image versions (like left- and right-handed gloves)—a property known as chirality.

This seems to be at odds with anything our common sense tells us. Because we know that the electron has a mass, but Weyl fermions have not; we know that the electron can move in any direction, but the quasiparticles break the time-reversal symmetry. Weyl fermions could exist in certain crystals known as “Weyl semimetals,” which can essentially split electrons inside into pairs of Weyl fermions that move in opposite directions. These Weyl fermions are not free-standing particles. Instead, they are quasiparticles that can only exist within those crystals. In other words, they are electronic activity that behaves as if they were particles in free space. Weyl fermions were detected experimentally in 2015 within in large crystals of tantalum arsenide (TaAs).

Weyl fermions and their properties make them very interesting objects from the practical point of view. To start with, Weyl fermions no mass implies they can move faster than electrons do, carrying charge with them, inside electronic systems. Furthermore, if they cannot move backwards they cannot bounce away from obstacles, meaning that they will have to zip through or around roadblocks; not like electrons, that can scatter backward when they collide, making their flow less efficient and generating heat. 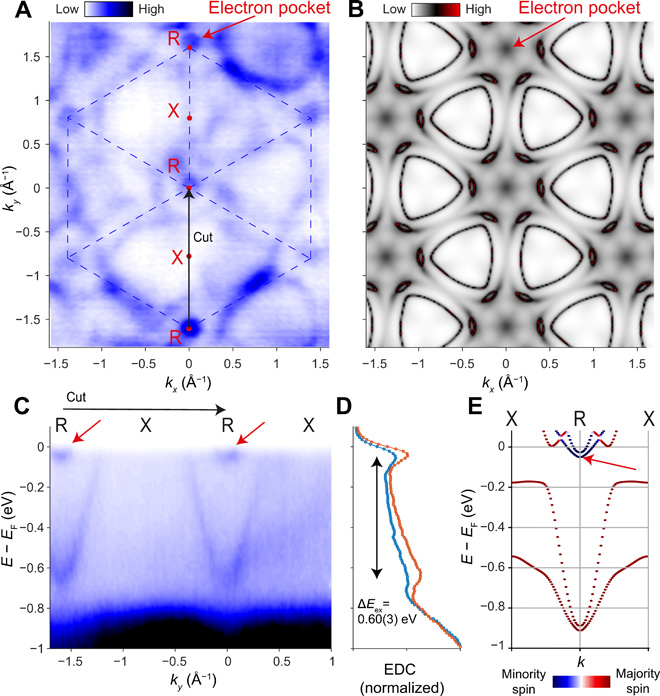 Now, a team of researchers reveal 1 that CoS2, a material with pyrite structure that has been long studied because of its itinerant ferromagnetism and potential for half-metallicity, actually hosts Weyl fermions and Fermi arc surface states in its band structure close to the Fermi level. They also find that CoS2 cannot be a true half-metal.

This means that CoS2 is a rare example of the recently discovered class of experimentally verified magnetic topological metals, which have been proposed to realize new mechanisms of spin-to-charge conversion. It could be a platform to investigate interesting topics in fundamental science: axion insulators, intrinsic anomalous Hall effect, or the anomalous fractional quantum Hall effect, to name a few.

On the other hand, this result illustrates the fact that, because the field of spintronics predates the first prediction of topological insulators and topological semimetals, topological phenomena in many well-studied spintronic materials may have been overlooked during initial investigations of their electronic properties.

The researchers observe the topological Fermi arc surface states that link the Weyl nodes, which will influence the performance of CoS2 as a spin injector by modifying its spin polarization at interfaces. Besides, a minority-spin bulk electron pocket is observed in the corner of the Brillouin zone, which proves that CoS2 cannot be a true half-metal.

CoS2 is also known as a good catalyst, e.g., for the hydrogen evolution reaction, and it has recently been speculated that Fermi arcs in Pt- and Pd-based chiral topological semimetals may play a role in catalysis due to their d-electron character and their robustness against hydrogen passivation. Since the Fermi arcs in CoS2 are also derived from bulk bands of d orbital character, they may contribute to the catalytic performance of CoS2.