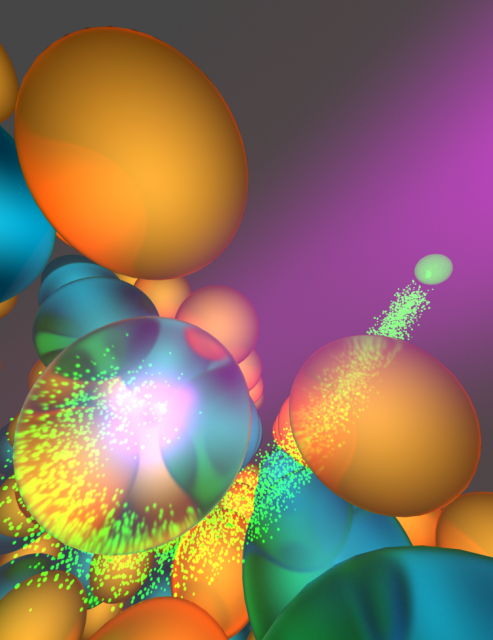 In 1882, Heinrich Hertz devoted himself to the study of electromagnetism, including the recent and still generally unappreciated work of Maxwell. Two years later he began his famous series of experiments with electromagnetic waves. During the course of this work, Hertz discovered the photoelectric effect, which has had a profound influence on modern physics.

But the explanation is far from trivial. Actually, the explanation of the photoelectric effect was the major work cited in the award to Albert Einstein of the Nobel Prize in Physics in 1921. Einstein’s explanation, proposed in 1905, played a major role in the development of atomic physics. He based his theory on a daring hypothesis, for few of the experimental details were known in 1905. Moreover, the key point of Einstein’s explanation contradicted the classical ideas of the time.

Einstein assumed that the energy of light is not distributed evenly over the whole expanding wavefront (as the classical theory assumed). Instead, the light energy is concentrated in separate “lumps.” In addition, the amount of energy in each of these regions is not just any amount, but a definite amount of energy that is proportional to the frequency f of the light wave. The proportionality factor is Planck’s constant, h. Thus, in this model, the light energy in a beam of frequency comes in pieces, each of amount E = hf. The amount of radiant energy in each piece is called a light quantum, or a quantum of light energy. The quantum of light energy was later called a photon.

Besides its theoretical and historical importance, the applications of the photoelectric effect are everywhere: from night vision devices to automatic doors or solar panels. One of these applications is an analytical technique called photoelectron spectroscopy, which is used to determine the ionization potential of molecules.

After more than a century of theoretical, experimental and commercial development, we could assume that we know everything there was to be known about the photoelectric effect. Not so. Today, Science publishes a work 1 by researchers from different German institutions, UPV/EHU, DIPC and CFM, where they show the process is not that straightforward in solid-state models. 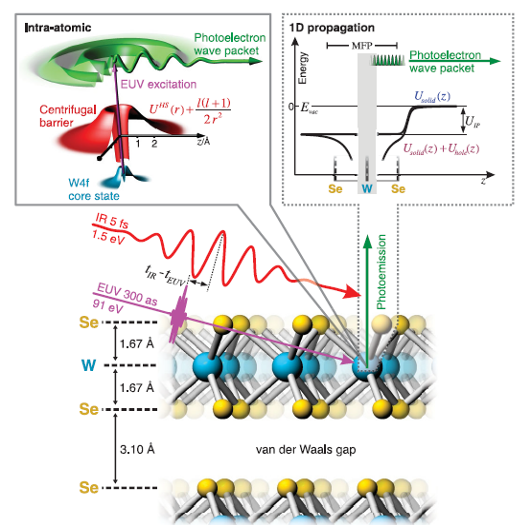 Tungsten diselenide (WSe2) yields a photoemission spectrum dominated by four emission channels with different electronic initial-state characteristics. According to the standard theory, all these electrons should be emitted at once, but that is not what is observed: there are relative emission delays.

The researchers come to the conclusion that the delays between the four photoemission channels can only be explained by accounting for both propagation and intra-atomic delays. The intra-atomic delays depending on the angular momentum of the initial localized state and determined by intra-atomic interactions. Once intra-atomic electron-electron interaction and angular momentum of the initial localized state are incorporated into the model for WSe2, there is a remarkable agreement between theory and experiment.

The interaction is better understood if we think of electrons as waves. The initially excited localized wave packet is dominated by the spherical symmetry of the atom from which the electron is emitted. Only after some time, as the wave propagates to neighbouring atoms, does the photoelectron feel the structure of the crystal.

What attosecond time-resolved photoemission spectroscopy provides is incorporating this initial phase of the photoemission process in more detail into the model. This initial stage, which is localized at the particular atom from which the electron is emitted, is the cornerstone of the new model and will be a benchmark for any future models of solid-state photoemission.

What bounds a molecular solid together?