This article is not about supporting the use of animals for research or to justify the need of such models for the advance of our society (many others have addressed that already). This post is neither about the constant pressure that researchers feel from peers, funding bodies or institutions to do more and more. The purpose of this article is to answer a question that I, personally, have been getting asked several times when mentioning my kind of work 1 and my field of research in front of a lay audience: why don’t you use prisoners (some people say convicted paedophiles and/or rapists) to perform your experiments instead of using animals?

Of course, almost everyone asks this out of kindness to other species but without actually considering it as a reasonable alternative. Nonetheless, and with the aim to challenge with a mental experiment to whoever reads this (and myself), I will go in depth about the issue and its corresponding implications with a “scientifically accurate” view. I would also like to address this question because I am convinced of not being the only scientist working on pain research asked so, my commitment to inform, and with the aim to dismantle any argument that could support that way of thinking (see figure 1). With the objective to oust this issue, I am going to divide my arguments into four wider areas: ethical issues derived from human experimentation, limitations of using inmates for research, increased difficulties and increased resources for the use of humans for research purposes.

Morally, it is complete nonsense to attempt to use humans, including prisoners, for certain types of experiments. We should consider the precedents in our past history. The most well-known examples are the human studies conducted by the Nazis during the World War II and the Holocaust, but these are not the only ones. Other countries in which such unethical procedures were carried out include Japan 2 or the USA. A notorious example is the Guatemala syphilis experiment carried out between 1946 and 1948, in which Guatemalan inmates were purposely and non-consensually infected with syphilis by USA experimenters, and by which the USA publicly apologised on 2010 3. It also worth mentioning the Stanford prison experiment, which was conducted on 1971 by Phillip Zimbardo at Stanford University and later popularised in the film industry (check figure 2). In there, consenting college students were used to psychologically assess the effect of power perception between inmates and guards but raised several ethical issues when the experiment continued even after the participants expressed their desire to stop it. As a result of those events in our past history, several measures are currently in place to prevent future unethical experimentation from happening again such as the Nuremberg Code, which established the basis for the subsequent OHRP Guidance on the Involvement of Prisoners in Research and the CIOMS Guidelines for Biomedical Research Involving Human Subjects. Additionally, we have to bear in mind that the main objective (at least within the European Legislation) of imprisoning someone is to re-integrate the individual into society. Therefore, my first argument against prisoners for science clearly points at how inhumane and illegal it could be and thus cannot be performed. The ethical issues should be enough to convince anyone that using humans, including prisoners, for this type of experimentation should not be attempted under any circumstances. Still, let’s continue with our mental experiment for the sake of argumentation.

However, someone could suggest to change the law or even ignore our ethics in order to use inmates for research. Thus, here is my second argument against it: prisoners are not a representative sample of the global population. Several reports show that the percentage of different ethnicities within inmates do not correspond with those of the general population, which means that the “genetic background” of this group does not match that of the society in which the institution is based. In the UK, for instance, there is an underrepresentation of people from white background (from 88% in the general society to 73% in jail) while minorities such as black or black British are over-represented (from 3% to 12%) 4. Other aspects that do not match are age, religion and level of education, all of which can influence the output of any biomedical research initiative.

Furthermore, there are other considerations to take into account if intending to do research in human beings. Importantly, we have to contemplate other limitations such as the lack of consent form the prisoners. Just try to be empathic here: how would you react if someone was about to perform experimentation on you that could potentially lead to suffering, illness or shortening of your lifespan? Especially those cases in which the ultimate output is you butchered up at the end of the experiment? With no chances of getting there alive… I would certainly react with violence in an attempt to defend myself. And ultimately, I would try to sabotage the data by whatever means I had, even via self-harming. As an example, we can refer to the recent hunger strike that occurred in the jails of Palestine. Additionally, I rather doubt that most scientist will feel happy to perform those experiments (we have feelings too, you know?). Besides, we could potentially be exposed to extortion and other means of oppression via mafias and other forms of organised crime, making this career path less appealing and with even fewer chances to get some life stability. 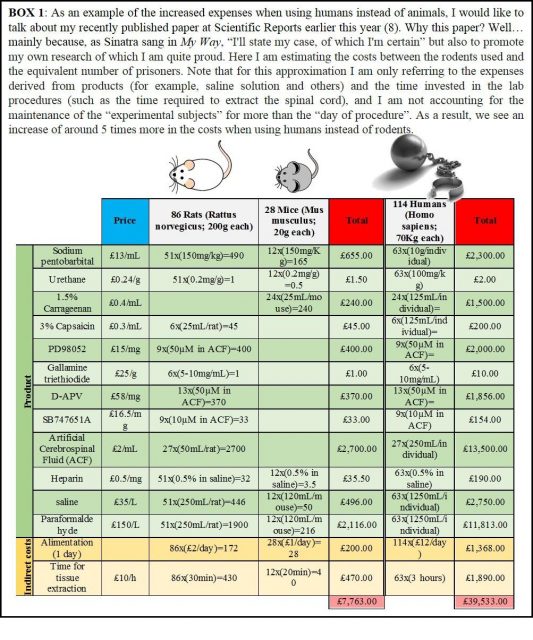 I am sure there are other arguments to add up against the use of prisoners for science (for example: what if we find out that someone was not guilty after all?) but I will like to finish this post by mentioning one that I believe is more relevant and that can raise one of the biggest points against it. That is: it will be much more expensive and take much more time to use inmates than animal models! How could we scientist be able to justify a budget five to ten times bigger to the corresponding funding body? Or what about telling them that you will need up to two decades to complete your experiments, instead of some weeks, just because you need genetically modified organism (obviating here, of course, the lack of fault of this second generation from the crimes of their parents)? It is tough enough already to get funding as it is! (Have a look at box 1).

By now, it should be clear for any reader that my main purpose with this post is to make people think, generate debate and encourage other scientists to be more open and less afraid to speak up about what they do. The fact that scientists still get asked this kind of question should raise some concerning flags. The scientific community must engage others in this matters. An initiative such as being open about animal research and supporting such statements 5 should be further encouraged if we aim to assure that the general society has a complete view on the matter, which will allow them to express fair opinions, either in favour or against, on animal research.