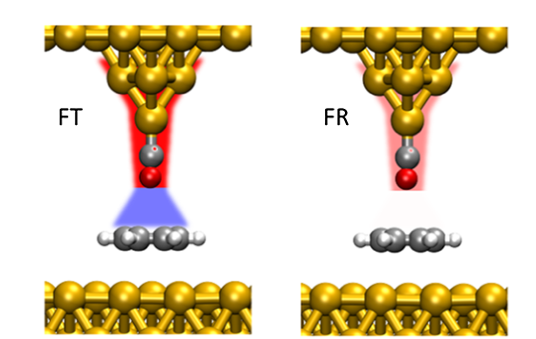 What only a decades ago seemed impossible for chemists, determining the chemical structure of molecules directly from experimental images, is now routinely done. Not only that, the information about bond order, intermediates, and products of on-surface chemical reactions or charge distribution within molecules can also be quantified from those images. Two main techniques have made all these information-loaded images a reality: atomic force and scanning tunnelling microscopies.

Atomic force is a type of atomic probe microscopy in which a small probe, consisting in a tiny chip of diamond, is held on a spring-loaded cantilever in contact with the surface of the sample. The probe is moved slowly across the surface and the tracking force between the tip and the surface is monitored. The probe is raised and lowered so as to keep this force constant, and a profile of the surface is produced. Scanning the probe over the sample gives a computer-generated contour map of the surface. Atomic force microscopy can resolve individual molecules.

In the case of the scanning tunnelling technique a fine conducting probe is held close to the surface of the sample and electrons tunnel between the sample and the probe, producing an electrical signal that can resolve individual atoms. Thus, atomic force is similar to scanning tunnelling microscopy but uses mechanical forces rather than electrical signals. This means that atomic force microscopy can be used in non conducting samples, like biological specimens.

An interesting question is, how is the high resolution of both techniques possible in the first place? The origin is now well understood within the framework of the so-called probe-particle model. In general, an atom or molecule (the probe particle) placed at the tip apex is sensitive to spatial variations of the potential energy landscape of the molecule resulting from the interplay between Pauli, electrostatic, and van der Waals interactions. At close tip-sample distances, the probe particle relaxes according to the potential energy surface, which gives rise to a sharp submolecular contrast.

But the real picture is not that rosy. On one hand, non-contact atomic force microscopy is most often used in the high-resolution imaging mode, which provides the highest spatial resolution with a relatively straightforward interpretation. This implies that the instrument needs to be operated in a frequency modulation mode which is not a trivial task from both the instrumental and data acquisition point of view. From this perspective, we may think that scanning tunnelling would then be easier to use, only to find that, on the other hand, the interpretation of high-resolution scanning tunnelling images is not at all straightforward because of the convolution of the geometric and electronic effects.

There could be an alternative to these techniques, inelastic electron tunnelling spectroscopy (IETS). IETS was discovered in 1966 by Jaklevic and Lambe when they studied the tunnelling effect of metal–oxide–metal junctions. Instead of finding band structure effects due to metal electrodes as they initially hoped, they observed patterns which were related to vibrational excitations of molecular impurities contained in the insulator. In this sense, IETS works due to localized molecular vibrational modes, and is therefore somehow related to other conventional optical vibrational techniques, like infrared or Raman spectroscopy, but its sensitivity is superior. The main problem of IETS is that the high resolution contrast was so far only demonstrated at sub-Kelvin temperatures. This temperature requirement poses severe limitations for its wider application.

Now, an international team of researchers, from DIPC and several Czech institutions, demonstrate 1 that high-resolution IETS is feasible at 5 K in standard laboratory conditions and experimentally confirm the common imaging mechanism for all three imaging techniques. Atomistic simulations and an extension of the probe-particle model provide a unified description of the three methods.

The researchers made simultaneous atomic force, scanning tunnelling and IETS measurements of iron(II) phtalocyanine adsorbed on Au(111) acquired with a CO-terminated tip at 5 K. Their results demonstrate that the high-resolution IETS imaging with a CO-functionalized tip is feasible at that temperature with a spatial resolution superior to scanning tunnelling and comparable to atomic force microscopy. Moreover, the high-resolution contrast observed in all channels simultaneously demonstrates unambiguously the common imaging mechanism, IETS, related to the lateralbending of the CO-functionalized tip.

The IETS spectroscopy reveals that the submolecular contrast at 5 K consists of both renormalization of vibrational frequency and variation of the amplitude of the IETS signal. The team confirmed this discovery using first principles simulations, extending the probe-particle model to include these two main ingredients necessary to reproduce the high-resolution IETS contrast.