Imagine a bucket filled with hard spheres. As these spheres are free to pack together as closely as geometry allows they tend to adopt a close-packed structure, a structure in which there is least unfilled space. X-ray diffraction studies reveal that many metallic elements have close-packed structures. This simple fact explains a couple of very important metallic characteristics.

One consequence of this close-packing is that metals often have high densities because the most mass is packed into the smallest volume. Indeed, the elements deep in the d block, near iridium and osmium, include the densest solids known under normal conditions of temperature and pressure. Osmium has the highest density of all the elements at 22.61 g/cm3 and the density of tungsten, 19.25 g/cm3, which is almost twice that of lead (11.3 g/cm3), results in it being used as weighting material in fishing equipment and as ballast in high performance cars.

On the other hand, if individual atoms are free to pack together this means that the bonds between the atoms have little directional covalent character. This low directionality of the bonds that metal atoms may form accounts for the wide occurrence of polymorphism, the ability to adopt different crystal forms under different conditions of pressure and temperature. The polymorphs of metals are generally labelled with greek letters α, β, γ,… with increasing temperature.

It is often, but not universally, found that the most closely packed phases are thermodynamically favoured at low temperatures and that the less closely packed structures are favoured at high temperatures. Similarly, the application of high pressure leads to structures with higher packing densities, such as cubic close-packed and hexagonal close-packed. 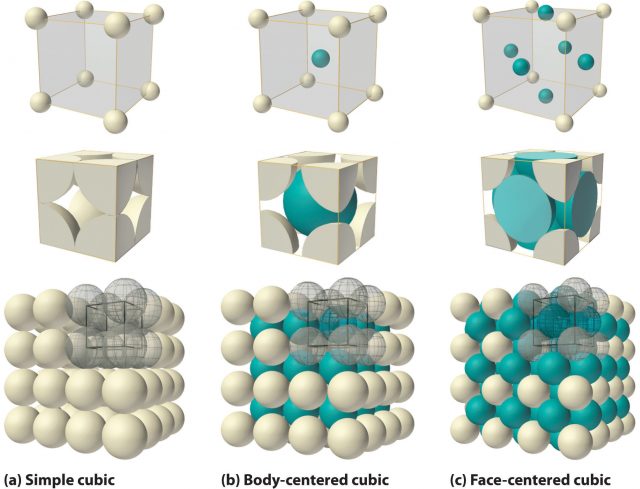 Some metals revert to a low-temperature form at higher temperatures. Iron, for example, shows several solid–solid phase transitions; α-Fe, which is body-centred cubic, occurs up to 906°C, γ-Fe, which is cubic close-packed, occurs up to 1401°C, and then α-Fe occurs again up to the melting point at 1530°C. The hexagonal close-packed polymorph, β-Fe, is formed at high pressures and was believed to be the form that exists at the Earth’s core, but recent studies indicate that a body-centred cubic polymorph is more likely.

The Earth has an innermost core about 1200 km in diameter that consists mainly of solid iron [*] and is responsible for generating the planet’s powerful magnetic field. The pressure at the centre of the Earth has been calculated to be around 370 GPa (about 3.7 million atm) at a temperature of 5000-6500°C. The polymorph of iron that exists under these conditions has been much debated with information from theoretical calculations and measurements using seismology.

The study of the structures and polymorphism of an element and compounds under high pressure conditions goes beyond the study of the Earth’s core. Hydrogen, when subjected to pressures similar to those at the Earth’s core, is predicted to become a metallic solid, similar to the alkali metals, and the cores of planets such as Jupiter have been predicted to contain hydrogen in this form. When pressures of over 55 GPa are applied to iodine the I2 molecules dissociate and adopt the simple face-centred cubic structure; the element becomes metallic and is a superconductor below 1.2 K.

[*] We are simplifying a little bit here. The inner core of the Earth, as detected by seismology, is a solid sphere about 1,216 km in radius. It is believed to be a mostly-iron iron–nickel alloy, as pure iron is denser than the core by approximately 3%.

Modulation of the resistance of thin metals using the Hanle effect