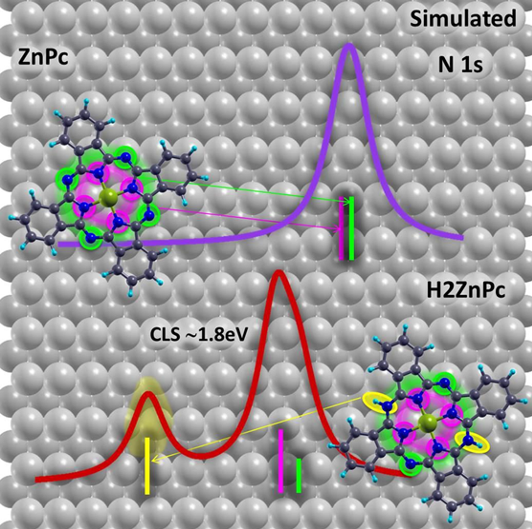 Mimicking natural processes has been a recurrent strategy for the development of new technologies, from velcro to bullet trains. Thanks to the advances in scientific knowledge and technological tools achieved over the last decades, biologically inspired research has evolved from the macroscale to the nanoscale. This poses an interdisciplinary challenge, involving fields such as molecular biology and surface science, aimed at the development of bioinspired nanodevices.

Covering (partially or totally) an inorganic substrate with organic matter is an appropriate and viable architecture for such devices. Particularly promising nanoarchitectures can be formed via on-metal chemisorption of tetrapyrrole molecules (phthalocyanines and porphyrins among others), which have often been proposed as ideal candidates for molecular electronics, spintronics, light harvesting and conversion, catalysis or even hydrogen storage. Additionally, the binding of small molecules or atoms, such as NO, CO, NH3 or H, to these molecules leads to modifications of molecular magnetic and/or electronic properties.

Organic−inorganic interfaces are usually characterized by a technique called XPS (X-ray photoelectron spectroscopy). XPS provides valuable quantitative chemical state information about the surface of a material. Measuring the shift in the binding energy of different inner, closed-shell, core levels, it is possible to verify the chemical integrity of a molecule, and to identify changes in its composition. But, because core levels are also very sensitive to changes in the local electrostatic environment induced by the presence of the substrate and/or other surrounding molecules, disentangling the collective electrostatic effects from the chemical shifts is crucial for a correct interpretation of experimental XPS spectra.

In order to better understand the role of the substrate and the chemical changes in the core level shifts a team of researchers from CFM and DIPC has performed 1 density functional theory (DFT)-based simulations of the N 1s XPS spectra and compared them with experimental measurements. The theoretical results suggest the emergence of unexpected molecular core level features.

As phthalocyanines, and their derivatives, have been widely studied and characterized by XPS the researchers chose metal-phthalocyanines (MPc) as test systems. MPc-s are planar organometallic molecules containing eight N atoms: four aza nitrogens (=N−, marked in blue in Figure 1a), and four iminic nitrogens coordinated to the metal core (metal−N=, in red in Figure 1a). Despite their nonequivalence, it is well-known that the 1s core levels of the two types of N atoms lie very close in energy, which normally leads to the observation of an unresolved single N 1s core level peak in photoemission experiments. However, unexpected features are frequently found in the N 1s energy region. This is the case, for example, of some MPc molecules deposited on Cu(110). Thus, the team concentrated on the surface and chemical effects for ZnPc molecules on Cu(110).

On the orther hand, the calculations also show that, when adsorbed at low temperatures, these molecules may undergo some chemical changes as they might capture hydrogen atoms from the surface, giving rise to hydrogenated molecular species and, consequently, to an extra component in the molecular core level spectra. Only upon annealing, and subsequent hydrogen release, would the molecules recover their nominal structural and electronic properties.

These results clarify some of the uncertainties in the measured electronic properties of organic molecules on surfaces, and represent an important advancement toward the ability to tune the functionalities of molecular scale nanodevices.

Towards a bottom-up engineering of molecular spintronic devices