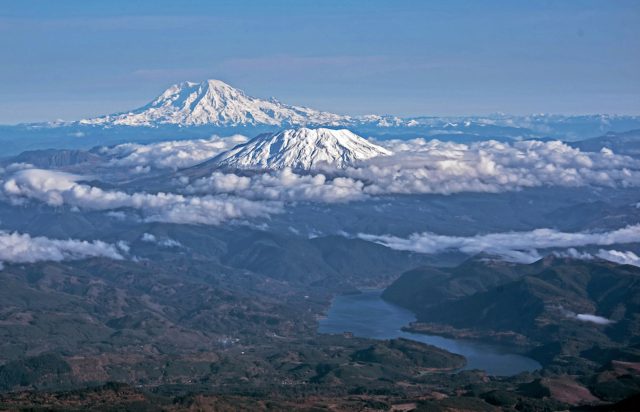 Deep Earth scar keeps Mount St. Helens out of line with other volcanoes

The Mount St. Helens volcano in Washington state doesn’t line up with other volcanoes in the Cascades mountain range because old tectonic collisions created a scar in Earth’s crust beneath it, changing how the magma flows.

Jupiter’s magnetic field is very different from Earth’s, starting in the planet’s northern hemisphere and re-entering at a spot just south of its equator as well as around the south pole. Scientists observed the magnetic field’s unusual properties using data from the Juno space probe.

New images of the asteroid Ryugu captured by Japan’s Hayabusa2 spacecraft reveal it is shaped like a top with a depression in the upper portion, reminiscent of the Death Star in the “Star Wars” movies. Hayabusa2 also found evidence that there are more rocks on the asteroid’s surface than expected, and that temperatures in its southern and northern hemispheres are significantly different.

The Defense Advanced Research Projects Agency has built on 2015 research that enabled a person with paralysis to control a virtual F-35 fighter jet, expanding brain chip technology. “As of today, signals from the brain can be used to command and control … not just one aircraft but three simultaneous types of aircraft,” said Justin Sanchez of DARPA’s Biological Technologies Office.

University of Minnesota researchers report crafting energy-efficient polymer-based photo diodes, using a custom 3D printer, ink containing silver nanoparticles and a bowl-shaped glass substrate measuring about 20 millimeters in diameter. The external quantum efficiency of the photodiodes is 25.3% despite being printed in ambient conditions without a cleanroom.