According to the results of the article The spread of true and false news online 1, which analyzed the posts on Twitter of 3 million people between 2006 and 2017, false news spread on the network faster than the true ones and they have a greater impact. 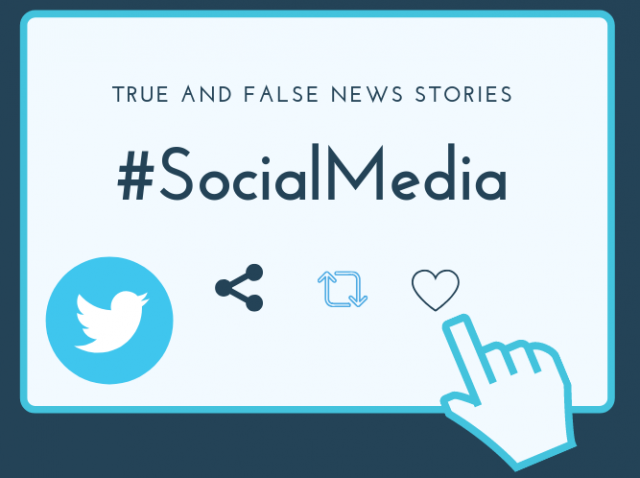 Although many of us know how Twitter works and its possibilities, we remember that among its functions, a user can make a statement about a topic in a tweet accompanied by an image and/or a link. Others can then spread it doing a retweet. These successive propagations are called cascades. This research analyzed 126,000 rumor cascades spread by 3 million people between 2006 and 2017. Samples were taken by six independent data verification organizations, such as Snopes, Politifact or Factcheck.

The surprising finding of the research is that tweets containing real information take six times longer to reach 1500 people than those that contain false information. Moreover, tweets with false content are 70% more likely to be retweeted than the true ones and, in particular, those of political content are the most viral, with 45,000 cascades, followed by urban legends, business, terrorism, science, entertainment and disasters. For example, the total number of false rumors peaked at the end of 2013 and 2015 and in the last US presidential election in 2016. 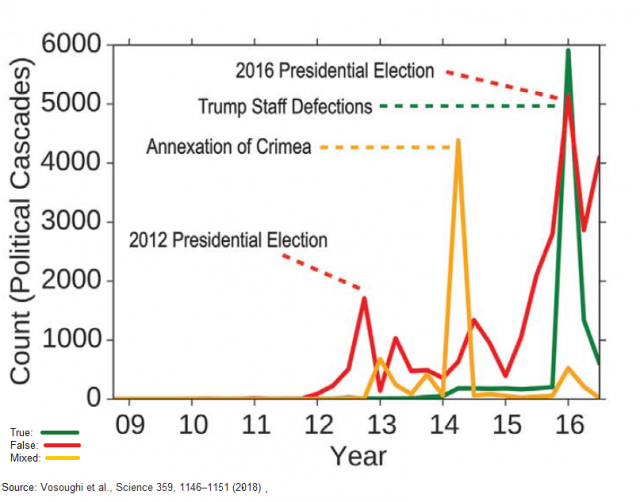 According to a survey conducted by the Pew Research Center 2, the majority of American adults (62%) receive news on social networks and 18% do so often, demonstrating that access to information and news is increasingly often through such networks instead of traditional media. However, little is known about the contribution of commonly used social networks to spreading falsehood online.

The aim of the research was to show how truth and falsehood spread online and the reasons for their selective dissemination. The authors consider that tweets or any statement made on Twitter are pieces of news. In this sense, the authors of the survey prefer not using the term fake news because it is the term employed in politics for classifying news sources that do not support the positions of politicians, whereas those which support them are not considered false. So from an academic point of view, the term fake should not be considered accurate. 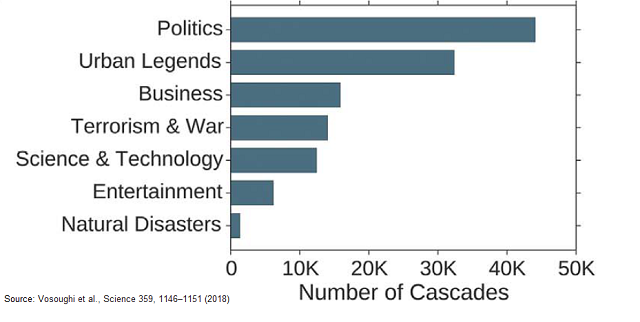 The false political news spread faster, reaching more than 20,000 people almost three times faster than the other types of news that reached 10,000 users. This showed that news about politics, urban legends and science reach more people, but the most viral and fastest among them, are those of politics and urban legends.

As the survey shows, we can conclude that falsehood travels faster when the person who broadcasts follows more people, has more followers or tweets more often, but the research also showed that those who disseminate false news have fewer followers, are less active on Twitter and spend less time in the social network. So, what are the reasons that explain this paradox?

The authors sought explanations in aspects related to information theory and the Bayesian theory of decision making. According to these ideas, the novelty of any news draws our attention, it can influence us when making decisions and encourages the exchange of information. News with false content does seem more novel than the real ones. The novelty is not only more surprising but it is also considered more valuable both from an informative and from a social point of view since the person draws attention to others for being the holder and source of unique information.

Likewise, the authors of the article evaluated other causes such as the perception of the emotional content of the answers to false and true rumors. In order to do this, they used a basic emotions classification (anger, fear, anticipation, confidence, surprise, sadness, joy and disgust) and employed, on the one hand, the list of lexicons of the National Council Canada (NRC) containing 140,000 words in English associated with these emotions, and, on the other, 32,000 hashtags and their associations with the same emotions. They found that falsehood provokes greater surprise, so it corroborates the variable of novelty, while truth incites anticipation, confidence, sadness and joy.

In addition, the authors of the article analyzed the dissemination of information using the accounts they identified as bots and observed that they disseminate both false and true news at virtually the same pace, so, they conclude, the false news spread faster because humans are more likely to spread them not as effect of bots’ actions.

Finally, the authors suggest that creating and disseminating false news can lead to mismanagement of resources during terrorist attacks or natural disasters; elections based on erroneous information or economic drifts. They propose to carry out a large-scale systematic analysis of the dissemination of false news because they believe that the first step to stop them is understanding the way they spread.

The true colour of chlorophylls