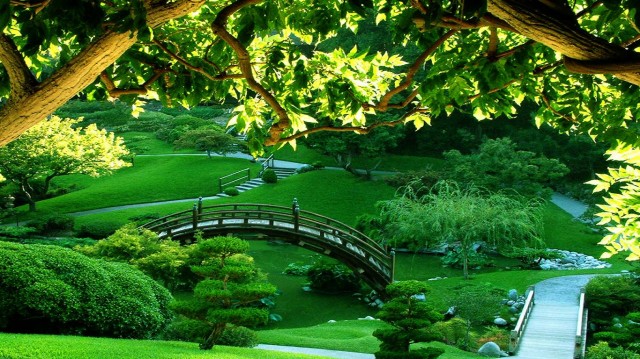 Chlorophyll a absorbs purple and orange light the most. Chlorophyll b absorbs mostly blue and yellow. But, as you can see in figure 1, they also absorb light with other wavelengths with less intensity. In any case neither one absorbs green, so the leaf looks green because that light is reflected to our eyes instead of being absorbed by the leaf. If there are no other pigments present, that is.

Chlorophyll molecules have a ring shape at one end, called a porphyrin ring, with a magnesium ion in the center (see figures 2 and 3; the magnesium ion is represented in green). If you boil a leaf in water, this magnesium ion gets replaced by a hydrogen ion (a proton), and the color changes from bright green to the dull color of overcooked broccoli. Just a slight change and the optical behaviour of the molecule changes. Furthermore, as you can see in figures 2 and 3, chlorophyll a and b only differ in a substituent of the porphyrin ring, for chlorophyll a it is a -CH3 and a -CHO for chlorophyll b, but it is sufficient to alter the spectrum of the molecule.

Photosynthetic chlorophylls are not alone in the leaf cells, they are usually in a protein pocket. It is this interaction with the surrounding microenvironment what finetunes chlorophylls to cover as much of the visible spectrum as possible. To know how much this microenvironment modulates the colour we need to know first which is the true colour of chlorophylls. And this is very important if we are ever going to understand how photosynthesis work and use this knowledge to build truly efficient photovoltaic devices.

This is not an easy question to answer, though. You might think that it is as simple as preparing a solution of chlorophyll and use a spectrometer to get the answer. This has already been done with different solvents. The problem with this method is that these solvents have an effect on the electronic structure of the chlorophyll molecule, namely on the electron cloud at the porphyrin ring, thus modifying its optical behaviour. Now, a group of researchers, including Angel Rubio from the Max Planck Institute for the Structure and Dynamics of Matter and DIPC, have developed a method1 to measure the true colour of chlorophyll in the absence of perturbations from its surroundings. They publish their results in Angewandte Chemie International Edition.

The spectra obtained by the researchers using this method demonstrate negligible dependence on the nature of the tag. This would mean that the cations are far enough from the porphyrin ring that confers its optical properties to chlorophylls. This possibility was confirmed using first-principle calculations: the results showed that the tag has minimum influence on the excitation energy and therefore on the wavelengths the chlorophyll molecules absorb; actually less than 10 nm.

So, what is the true colour of chlorophylls? In the case of chlorophyll a the maximum absorption in the red region is at 642 nm and in the blue one at 372 nm; for chorophyll b the values are 626 nm and 392 nm respectively. This means that the environment red-shifts the spectra of chlorophylls or, in other words, chlorophylls are bluer than we think.