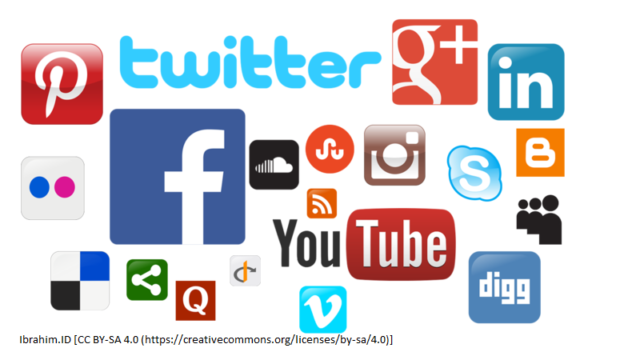 Technology by itself is not good or bad but it can be given good or bad uses and everything depends on the decisions made by the people who use it. One of the good uses of social networks is what some scientists are doing to create academic networks outside of their work, as well as sharing, debating and interacting with the public. However, research showed that the increase in the use of social networks by scientists has been very slow. For example, a study of scientists conducted in 2014 at the University of Michigan (USA), in which 368 scientists from different areas were surveyed, revealed that 40% did not use online platforms for professional or academic work 1. Knowing what are the benefits and barriers to the use of social networks would increase the exchange of knowledge, the commitment that scientists have to society and scientific literacy in the general public. These are the objectives that the authors of the study “How Are Scientists Using Social Media in the Workplace?” 2 published in 2016 have in mind when they decided to analyze the use of social networks by scientists.

The aforementioned study evaluated the behavior of scientists using several social networking platforms based on the results of a survey completed by 587 scientists from different countries, of which 49% were men and 51% were women. The survey was distributed by email using the online database of the Twitter Your Science website. Regarding the ages, the majority were identified between 21 and 29 years (39%) and from 30 to 39 years (39%); 14% were between 40 and 49 years of age, and 7% were between 50 and 59 years old. The survey was completed between October 2013 and October 2014.

Regarding the general use of social networks and blogs, the results showed that three social networks dominated: Twitter, Facebook and Linkendin, which were used by more than 50%, as can be seen in the following table. You can also see the usage estimate, although this question may have caused confusion in what each respondent understood to be a user. As for blogs, 50% were authors of a blog; 92% indicated that they read science blogs and 84% shared posts with professional colleagues. As a digital medium to disseminate science, 89% believed that the blog was a good tool to explain science to the general public. 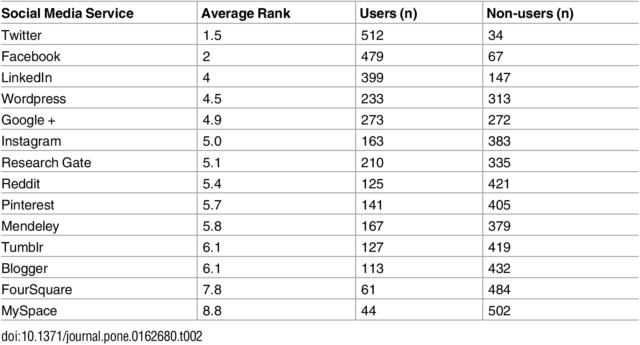 The study also analyzed separately the most used social networks. Facebook was used with different objectives. While 88% confirmed having an account in this social network in which science is shared with friends and family members, only 33% were administrators of a page dedicated exclusively to science. However, a majority (75%) used Facebook to follow pages about science. A relevant data of the study related to the topic of misinformation was that 18% corrected scientific misinformation frequently and 40% occasionally. Among the answers to the question of whether Facebook is effective in communicating science, only seven people responded that it was difficult to make a useful follow-up since there is a mixture of rigorous comments with superficial comments to which trolls intrusions were added.

Regarding the use of Twitter, the study analyzed more variables given that the participants of the survey were selected from a database that already uses this social network. A majority (93%) was using it for less than two years and its followers varied, only 1% had more than 5000 followers, 12% between 1001-5000 and 13% between 500-1000.

According to the requirements that a tweet must have to be considered “scientific” (it includes scientific content, it is published by a scientist and includes a hashtag related to science) 3, 32% had published between 1001-5000 of this type of tweets. In relation to their desired audiences, 61% would prefer scientific colleagues to the next group of audiences, the general public, with 31%. These data support previous research that showed that scientists use Twitter mainly to interact with other colleagues and scientific communities and use it less as a tool for scientific dissemination.

Similarly, the scientists were asked how many of their colleagues used Twitter, and an estimate of 22% was obtained. The reasons for not using it were mainly ignorance of Twitter (32%) and lack of time (28%). Also 8% thought that their colleagues think that Twitter is frivolous and that it is not a rigorous scientific mean.

In addition, the scientists reflected on the benefits of using Twitter. According to their responses, the authors of the study grouped them into five themes: scope and diversity of potential audience (28%); brief expression of the content that involves little time spent to create it and accessibility to it (26%); creation of professional networks (20%); content that you access and share (14%) and communication of scientific content to the general public (7%).

Finally, they were asked if there was a policy in their workplace on the use of social networks. The majority (44%) responded that they had no knowledge of whether such a policy exists and 36% did not have it. Only 20% reported that their place of work had a policy of using social networks on three main aspects: the care they should have so as not to damage the reputation of the institution; about the time they should dedicate to social networks and that they only comment on topics of which they are specialists.

As the authors of the study conclude, the perception of social networks and the lack of knowledge about them hide the potential they have and, that can be avoided, if training actions are carried out on their use and clearer policies in the work centers are established.