For a successful application in spintronics of any material, a key problem is to get a reliable control of the electronic spin within it. An ideal candidate for this purpose would be any material which is non-magnetic in the bulk but has a tunable ferromagnetic surface layer with a large splitting of the spin-up and spin-down states in energy and momentum – the so-called Rashba splitting. But, is this possible? 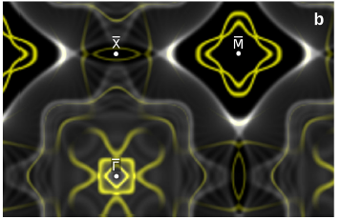 Our research shows 1 that EuIr2Si2 unexpectedly reveals such properties. Furthermore, by analyzing our high-resolution ARPES spectra and using state-of-the-art DFT calculations, we disclose how magnetic exchange and the Rashba effect interact and result in a tunable momentum-dependent spin polarization.

EuIr2Si2 is a material discovered in 1986 with well-established bulk properties. It presents a valence-fluctuating Eu state and therefore remains in a non-magnetic state down to lowest temperatures. Our ARPES spectra show that the Si-terminated surface of EuIr2Si2 hosts a well-defined surface state spreading through the topmost Si-Ir-Si-Eu layer. We discovered that Eu in this surface layer is not in a valence fluctuating state as in the bulk, but in a magnetic divalent state. Furthermore, our data clearly evidence that the 4f magnetic moments of this divalent Eu layer order ferromagnetically at a surprisingly large temperature of about 48 K and with a huge moment of a size expected for the Eu2+ state (7 B). This results in a large exchange polarization of the spins of the surface state electrons.

However, because the Ir atoms are strongly involved in this surface state, the absence of inversion symmetry at the surface results in a large splitting and spin polarization already in the paramagnetic state at high temperatures due to the Rashba effect. For T < 48 K the ordering of the Eu 4f moments leads to a competition between two fundamental spin splitting mechanisms: spin-orbit coupling and exchange magnetic interaction. This leads to a momentum-dependent and temperature-tunable spin splitting, which can be well resolved in the experiment. We could very nicely reproduce our experimental results using ab initio calculations as well as the relativistic k·p model for the interaction between magnetic exchange and the Rashba effect. We found also that the temperature-dependent mixed valence of the bulk allows to tune the energy and momentum size of the projected bulk band gaps to which the 2D carriers are confined. This gives an additional degree of freedom to handle the spin-polarized carriers at the surface of this non-magnetic crystal in the bulk.

In summary, we reveal EuIr2Si2 to be a new kind of material, which despite being valence fluctuating and non-magnetic in the bulk presents strong 2D-ferromagnetism at the surface. This results in a tunable highly spin-polarized surface state making this material of strong interest for the field of spintronics. The excellent agreement between DFT and model calculations leads to a detailed insight into how this spin polarization arises from the competition between the Rashba effect and exchange magnetic interaction. This provides a sound basis for a systematic search for further appropriate materials. Our discovery discloses valence-fluctuating rare-earth based compounds as a very interesting basis for designing and searching systems with unique magnetic surface properties of interest both for fundamental science and application.

Thus, our findings make an urgent call for reconsideration of a huge class of valence fluctuating or paramagnetic bulk materials in which heavy 5d elements are combined with rare earth and/or transition metal elements. We anticipate, that in these materials similar or more advanced 2D-ferromagnetic properties confined to the surface as those in EuIr2Si2 could be found, which might have been overlooked so far.

Itinerant ferromagnetism at the surface of an antiferromagnet

Fine-tuning the speed of magnetic devices