The most famous conjecture in condensed-matter physics was proposed in 1935, when Hillard Huntington and Eugene Wigner calculated the properties of hydrogen squeezed to high density and pressure. They predicted that under pressures above 25 gigapascals (GPa), hydrogen would undergo a density-driven transition from an insulating, molecular solid to a conducting, atomic solid. In their words: “Any lattice in which the hydrogen atoms would be translationally identical (Bravais lattice) would have metallic properties.” 1. The interesting point is that that conducting, atomic solid would not be an ordinary conductor, but a room temperature superconductor.

It should not come as a surprise that hydrogen metallization under stable conditions is a major quest for realizing the first room temperature superconductor. It may surprise you, however, that metallic hydrogen is a naturally occurring material: for example, the standard three-layer model for the interior of Jupiter and Saturn claims that an outer layer of molecular hydrogen surrounds an inner layer of liquid metallic hydrogen, with a probable rocky, molten core; laboratory pressures around 300 GPa and temperatures between 1000 and 2000 K are needed in order to reproduce the conditions inside these planets 2.

But it is not easy to know experimentally what happens under these conditions. Solid hydrogen at high pressures exhibits a very rich phase diagram with the presence of five different insulating molecular phases, labeled from I to V, before undergoing a transition into the long-sought atomic metallic state proposed by Huntington and Wigner. 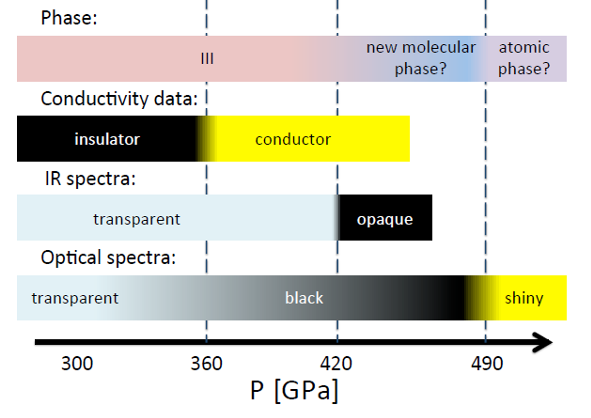 The experimental structural information must be inferred indirectly from vibrational spectroscopy (Raman and IR) and/or optical measurements (transmittance and reflectivity) only, as neutron and X-ray scattering require sample sizes which are not feasible. Actually, the experimental difficulties in collecting data and the different probes used have led to apparently contradicting results about the metallization of hydrogen at low temperatures in the solid-state as shown in the figure. Optical reflectivity measurements suggest metallization of hydrogen in an atomic state at 495 GPa from an unidentified opaque phase I, electrical measurements observe semimetallic behavior in phase III above 360 GPa, while infrared transmission experiments suggest that hydrogen metallizes from phase III after a first-order transition to a metallic phase at 420 Gpa.

This is where good models should help, namely, numerical ab initio simulations. However, different theoretical approximations yield to distinct low-energy structures, and, thus, a strong debate on the correct identification of the phases is ongoing. A refinement of the basic assumptions is, thus, needed. What could it be?

All structure searches performed so far on hydrogen assume that nuclei are classical particles. The Born-Oppenheimer energy landscape is explored looking for the global minimum of the energy. However, as hydrogen is the lightest element, its nucleus is subject to huge quantum fluctuations that can largely affect structural properties. Quantum fluctuations were what explained the crystal responsible for superconductivity at 250 K, so it it is worth considering seriously that this is it.

The researchers find that hydrogen metallization occurs at 380GPa in phase III, in good agreement with transport data. They show how hydrogen acquires conductivity and brightness at different pressures, explaining the apparent contradictions in existing experimental scenarios. For instance, the simulations predict phase III is a black metal – transparent in the IR, meaning that there is no contradiction between the existence of a conducting metallic state, an IR transparent window, and a black appearance of the sample.

The team also predicts that the conductivity onset and the optical gap will substantially increase if hydrogen is replaced by deuterium, underlining that metallization is driven by quantum fluctuations and is thus isotope dependent.