A kinetic isotope effect (KIE) has been observed for the generation of hydrogen from the hydrolysis of a hydrosilane catalysed by a silyl-iridium(III) complex. This and other experimental evidence together with theoretical calculations have been used to demonstrate the participation of hydrogen quantum tunnelling in this catalytic process. 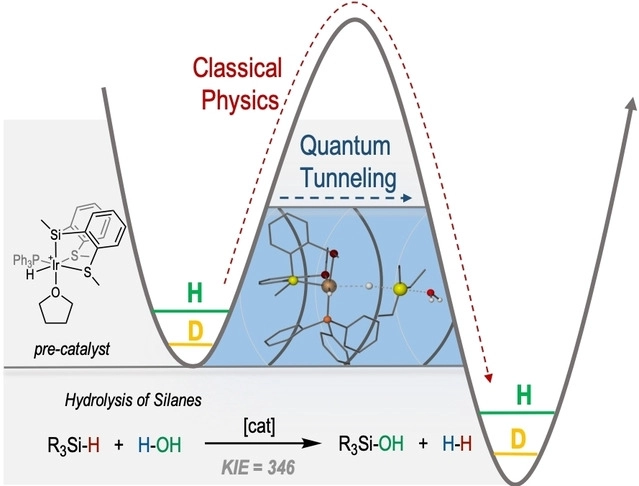 KIE is a phenomenon associated with isotopically substituted molecules exhibiting different reaction rates. Isotope effects such as KIEs are invaluable tools in both physical and biological sciences and are used to aid in the understanding of reaction kinetics, mechanisms, and solvent effects. Formally, it is the ratio of rate constants for the reactions involving the light and the heavy isotopically substituted reactants (isotopologues). In this case, KIE reached 346 measured at room temperature, the largest ever reported for this type of reaction.

Silane is the silicon equivalent to methane (CH4), SiH4. Hydrosilanes (also known as silanes) are compounds in which one or more hydrogen atoms of a silane molecule are replaced by alkyl groups. The metal-catalysed hydrolysis and alcoholysis of hydrosilanes are well-known processes. Recently, these reactions have become interesting from a new point of view: the equimolecular H2 produced this way makes hydrosilanes promising candidates as hydrogen source materials.

The hydrolysis of the Si-H bonds is a thermodynamically favourable process, so much so that silane is spontaneously flammable, even at low temperatures. However, it is a slow reaction. Hence, many catalytic systems based on transition metals have been developed, the iridium-based ones standing out due to their high activities.

The catalytic cycle (see figure) accepted for the hydrolysis and alcoholysis of hydrosilanes (R3SiH) involving different electrophilic catalysts is an outer-sphere nucleophilic attack of alcohol or water on the activated silicon centre, generating an iridium-hydride and a solvent-stabilized silylium cation, which immediately reacts to form an iridium-dihydrogen complex and the corresponding silanol or silylether. Liberation of hydrogen from the metal centre and coordination of a new hydrosilane close the catalytic cycle, requiring only one vacant coordination site on the metal to proceed.

A research team has been working on the synthesis and applications of rhodium and iridium complexes with silyl-thioether multidentate ligands. This kind of ligands has proved to be useful to stabilize unsaturated rhodium and iridium cationic complexes, leaving a coordinative vacant site in trans with respect to the coordinated silicon centre (often occupied by a solvent molecule). This means that, if we assume the mechanism for the catalytic cycle is correct, then unsaturated iridium(III) compounds are perfectly suited to activate hydrosilanes.

Now, this team has performed 1 combined experimental and theoretical studies on the high catalytic activity of a cationic hydrido-silyl-IrIII in the hydrolysis and alcoholysis of silanes. Detailed DFT calculations on the reaction lead the team to propose a slightly modified electrophilic mechanism for the reaction compared to the previously reported ones.

The involvement of hydrogen tunnelling in the rate-determining step of the process explained the high catalytic activity and the unexpectedly large KIE observed at room temperature. Theoretically calculated KIEs at different temperatures using a tunnelling correction, support the importance of tunnelling effect. This is the first reported case of hydrosilane activation with the participation of quantum tunnelling.