Brain cells communicate through neurotransmitters like glutamate or dopamine, the substances we got used to reading about when learning about brain function. However, it seems this is not the only way neurons can communicate. A new study 1 suggests that certain proteins can act as brain messengers in the brain.

Previously, only pathological proteins like tau or prions were known to transfer from one cell to the next, but whether this mechanism also took place in “normal” conditions was not clear. To investigate its existence, researchers labelled neural proteins in the eyes of rats and observed that these tagged proteins had reached cortical areas in the rats’ brains 11 days thereafter.

Using mass spectrometry, a technique used to identify amino acids and elements in a biological sample, identified over 200 brain proteins among those being transported from the eye to the brain. Maybe not surprisingly, tau and synuclein, two proteins related to amyloid deposition in Alzheimer’s disease, were among those transported, newly identified brain messengers. 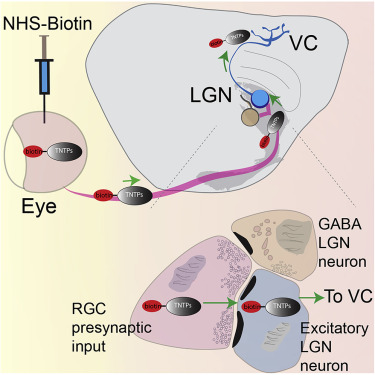 Moreover, these proteins were found to be transferred in packages called exosomes, which have an outer membrane that fuses with the target cell to release their content and are known to serve as communication vessels among cells. What’s interesting is that these proteins acting as brain messengers are transported mainly between excitatory neurons.

I think it would be interesting to see how this protein transport is related to neurodegenerative diseases, and whether this could explain their targeting of excitatory neurons. Moreover, the authors consider that in the future, we could potentially hack this transport system to include some curative proteins as brain messengers that might aid against diseases like Alzheimer’s.

What your eyes can tell

The use of natural fluorescent proteins for studying life