This column seems to be gaining a new subcategory, which we could name ‘Wokism as the latest historians’ epidemic’ or something like that. I have already written a couple of reviews of recent books that tried to awaken us from our outdated, Eurocentric, rationalistic and neoliberal assumptions about the essence of history (Graeber’s and Wengrow’s The Dawn of Everything, and Anderson’s The Realness of Things Past). Now it is the turn to the last bestseller in a field on which I can presume of having a little bit more knowledge than in the other two cases, which may be the reason why I think the book’s argument is much worse than theirs: James Poskett’s Horizons: A Global History of Science. Actually, Poskett’s book contains more ideological propaganda than honest scholarly research, though in spite of that (or probably it would better to say thanks to that), there are chances that it becomes one of the reference works in history of science within the next years. 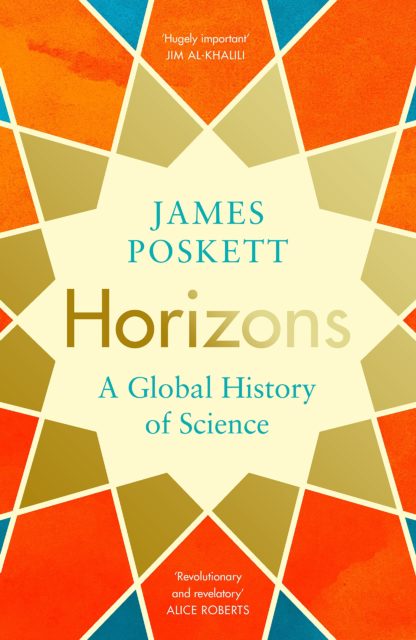 The sad truth, instead, is that the book does not discover us anything that was not perfectly well known since many decades ago for people familiar with the history of science: That Copernicus strongly depended on the work of Islamic astronomers; that modern science is not the outcome of the abstract and pure minds of solitary geniuses; that the expansion of science during the Enlightenment was parallel and strongly interdependent with the imperialist expansion of European powers; that scientific progress in the 19th century went hand in hand with the growth of capitalist industries (and continued expansion of European empires); that the same happens in the 20th century with respect to Cold War geopolitics; and that a lot of science has been done either out of the European centres of research or on the basis of work done by ‘indigenous’ people. Is anything of that new? Sadly again, it isn’t, but it probably makes news much better. The most surprising thing about the book is that so many people (starting with the author) feigns to be surprised by these apparently scandalous ‘discoveries’. As one keeps reading it, one gets the impression that all the knowledge about the history of science the book presumes that readers have (and often the only knowledge the author seems he had before he started to write it) was of the kind one can find in works like Isaac Newton and the Laws of Motion (a children’s graphic novel by Andrea Gianopoulos). So, Horizons pretends to combat one myth by inventing it (or by inventing the fact that a myth that was dead for more than half a century ago is still academic or cultural orthodoxy). We can name this as the myth that there is a myth to combat. The narrative of the book only makes sense, and has some rhetorical force, by assuming that many people think that the majority of the people that may be reading academic books about the history of science share as an article of faith the ‘dogmas’ the book is combating. The second part is blatantly false (the majority of people having some non merely trivial knowledge about history of science are totally far from believing such ‘dogmas’). But, unfortunately, the first part seems to be right: there is a lot of people (many of them people that will not read Poskett’s book, but will only know something about it through some newspaper’s review, or much probably through one tweet) who believe that the second part is true. Of course, books like Lost Horizons, and its cultural advertising, contribute a lot to keeping alive this second myth.

Another unfortunate consequence of this struggle for an ideological narrative rather than from the truth is that, in spite of its careful work of accumulation of charming anecdotes, Horizons becomes basically useless as a book of history of science, in the sense that someone having at most a very superficial and sketchy idea about the evolution of scientific knowledge between 1400 and 2000, will not learn absolutely anything relevant about the topic, besides some vague thesis like ‘modern science was not a European invention, nor was mainly done by Europeans, or if it was, these Europeans got much more credit than what they truly deserve’. For example, one does not learn what the (either original or ‘stolen’) contributions of Copernicus and Newton to the corpus of scientific knowledge were, nor what they were relevant for scientifically speaking. One only learns things like that Copernicus “was in fact building on a much longer Islamic tradition” (if one didn’t know this before, what in the case of people knowing anything more or less academically serious about the history of astronomy is very unlikely), and that he employed something called ‘Tusi couple’, a geometrical device invented by the Persian 13rd century mathematician al-Tusi. But one is given absolutely no clue of what Copernicus use that device for (save the totally vacuous claim that “without it, Copernicus would not have been able to place the Sun at the centre of the universe”… something that Aristarcus had done many centuries before Muhammad was born, by the way).

One also learns that astronomy in Muslim countries didn’t stop being practiced after the Islamic Golden Age (roughly from the 8th to the 14th centuries), but was still ‘important’ during the times of the Otoman empire. But besides giving us a vivid description of the Istanbul observatory, containing even some Western mechanical clocks that some Turk scientists had been so clever as to reproduce, one wonders why Otoman scientists did not take advantage of the superb stature that Islamic astronomy had just before the times of Copernicus, and why it wasn’t them who produced some revolutionary, bewildering new theories of the solar system like those of Galilei or Kepler. Of course, one can claim with all earnestness that ‘modern science is a global enterprise’, but I suspect that what one could not assert without hanging his head in shame is that ‘the discovery of the geometrical and dynamic laws of planetary orbits, and the observation of the satellites of Jupiter or of the phases of Venus, was a global enterprise’. This is perhaps the reason why Horizons only cites Galilei twice (and only to slip in the idea that saying that ‘Galilei was the first to observe the moon with the telescope’ is just a Eurocentric topic), and Kepler not a single time (poor Kepler: there was not a single Muslim astronomer dreaming of elliptic orbits in the Middle Ages).

The same happens with almost all the examples of ‘indigenous science’ mentioned in the book. For example, of course Spaniards ‘appropriated’ a lot of knowledge about American plants from the conquered natives! And of course mathematics was practiced in China and in Timbuktu much before any westerner arrived there! But the fact is that the kind of knowledge those non-European people had obtained in that way was as far from being ‘scientific’ in the sense we talk about modern science, as the knowledge had by the European farmers, artisans and monks of, say, the 11th century was from being ‘modern science’. One also suspects that Poskett must have been writing tong in cheek when he tries to convince you that La Condamine’s measurement of the meridian in Ecuador in 1736 was basically successful thanks to his native workers being capable of digging extremely straight trenches a few kilometres long, that this capability was inherited from their ancestors having made some astronomic figures using that technique some centuries ago, and that because of that, the European astronomic discovery of the non-perfect sphericity of the Earth ‘heavily depended’ on indigenous astronomic knowledge (the workers of the tween expedition to measure the Earth meridian closer to the North pole are neither praised not quoted by Poskett, perhaps because the Lapland’s Saami didn’t have an astronomic tradition as cultivated as that of the Incas, and Maupertouis deserved then more merit than La Condamine). To cut a long story short: that mass of ‘indigenous’ knowledge did not produce by itself basically anything having the scientific stature of the work of people like a Huygens, an Euler, a Linnaeus or a Darwin. The almost only exceptions in the book of really ‘first class’ scientific knowledge produced by non-European people in the modern times comes when Poskett’s talks about non-European scientists practicing –I dare to say– ‘European-like’ science in the ‘European-inspired’ research institutions of their own countries since the end of 19th century (that some of this science helped to gain Nobel prizes to their authors seems to be not enough proof for Poskett of the fact that ‘the neglect-of-non-European-science’ is just a myth). Most funny still is when Poskett talks about Russian (!) science as an example of non-European science.

I shall end with just a couple of brief comments. First, Horizons will probably become an editorial success because it will be, if not very often read, at least very often quoted as an authoritarian academic source supporting the ‘fact’ that the European Scientific Revolution is nothing to be proud of (except if you humbly and on your knees recognise its profound debt with the exploited and neglected non-European victims of the European empires). That one of the chapters is unashamedly entitled “Newton’s slaves” is nothing but an invitation to take the book as a fundamental work in the ‘decolonial studies’ bibliography, the work to cite if you just want to claim that the Scientific Revolution is one more item in the list of crimes of the white people, but don’t want to suffer the cost of studying anything about it (by the way: if you do want to learn something about the Scientific Revolution, what you have to read is David Wootton’s The Invention of Science).

Second, and last: to be a book about the global nature of science, one shocking thing about Horizons is that it basically cites no book or article that is not published in English. The indigenous scientists or proto-scientists Poskett is apparently so proud of do not deserve still the right to be quoted and studied in their original languages by the new decolonial historians of science. Or perhaps it is that decolonialism is just the new cricket, a mere decorative entertainment for the subjects of the new Anglophone cultural empire.

Gianopoulos,Andrea, Isaac Newton and the Laws of Motion, Capstone Press, 2007.

Wootton, David, The Invention of Science: A New History of The Scientific Revolution, Harper, 2016.

Searching for the lost causes