Twisted bilayer graphene (TBG) has taken the spotlight in the condensed matter community since the discovery of correlated phases. Now, a team of researchers studies 1 heterostructures of TBG and hexagonal boron nitride (hBN) using an atomistic tight-binding model together with semi-classical molecular dynamics to consider relaxation effects.

Isolated atomic planes, two-dimensional (2D) materials, like graphene can be reassembled into designer heterostructures made layer by layer in a precisely chosen sequence. Such heterostructures are often referred to as ‘van der Waals’ and the simpler one is composed of just two layers (bilayer). In 2018, Pablo Jarillo-Herrero, an experimentalist at MIT, found that at 1.1 degrees rotation (the so-called magic angle) at sufficiently low temperatures, superconductivity appears in twisted bilayer graphene. Could something similar happen in other materials?

In recent years, a new field of study of this kind of 2D materials has come of age: twistronics. Twistronics is the study of how the angle (the twist) between layers of two-dimensional materials can change their electronic properties. When two-dimensional crystals are brought into close proximity, their interaction results in the reconstruction of the electronic spectrum and the crystal structure. Such reconstruction strongly depends on the twist angle between the crystals, and at certain values of this angle new interesting electronic and optical properties arise in graphene and transitional metal dichalcogenides. A rotational control has allowed the observation of long-lived excitonic states, resonant tunnelling and highly correlated electronic states, including, as we mentioned before, superconductivity.

Since the discovery of graphene, a wide diversity of atomic-layer-thick, two-dimensional materials with varied properties have emerged. Of particular interest is hexagonal boron nitride (hBN), one of the most used crystals for engineering van der Waals heterostructures. hBN is a wideband insulator isoelectronic to graphene and has also a honeycomb lattice, in this case formed by alternating nitrogen and boron atoms with a strong polar covalent bonding between them, but in contrast to the semi-metallic graphene, its band structure presents some characteristics that makes it particularly attractive for applications in microelectronics, either alone or in combination with other 2D materials, such as, well, graphene. 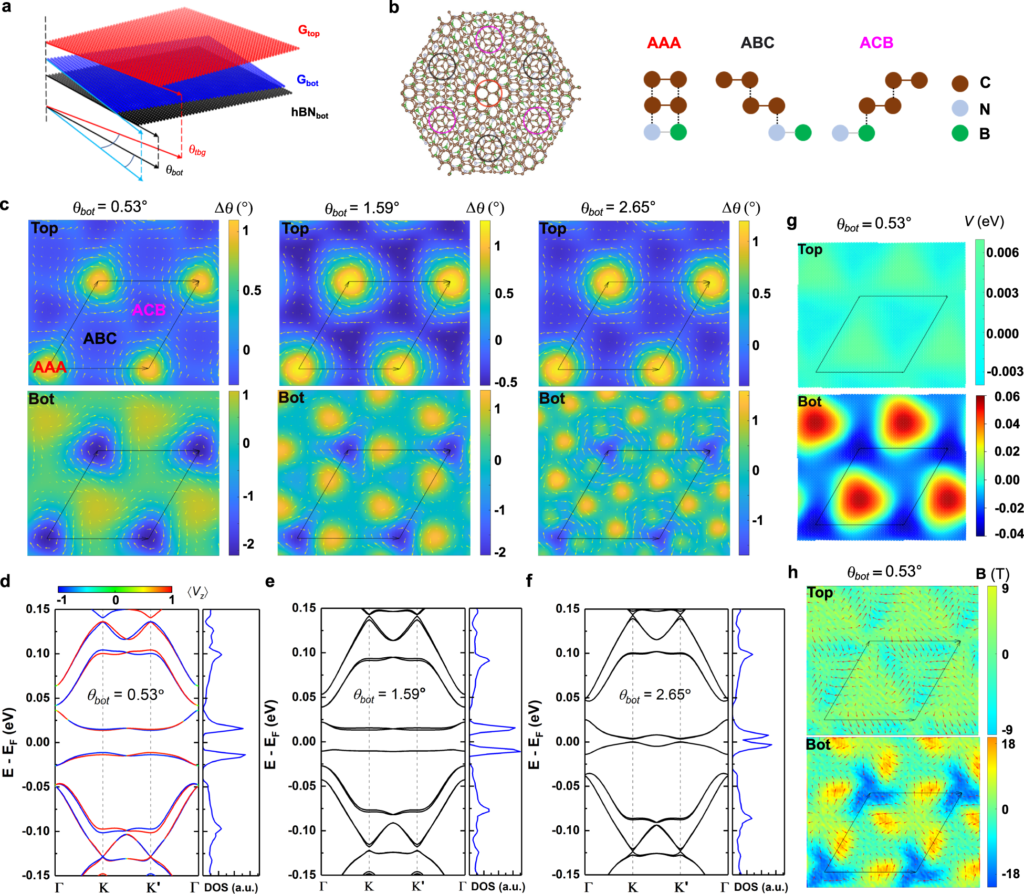 TBG is usually supported on top of a variety of substrates in experiments. Interestingly, depending on the experimental setup, it can also be clamped between two layers of material. Among all of these, due to its atomically smooth surface that is relatively free of dangling bonds and charge traps, hexagonal boron nitride (hBN) stands out due to the cleaner structures that can be fabricated. In fact, it has been shown that graphene mobility, when deposited on hBN, is dramatically improved as compared to those on SiO2 substrates.

Interestingly, the large band gap of hBN has the advantage of having little interaction between the states of hBN and graphene, contrary to metallic substrates where a large hybridization between the graphene and metal states can occur. And, even though the interaction between graphene and hBN is small due to the large band gap of hBN, in the case of TBG on top of hBN it has been shown it is enough to affect the electronic properties of TBG. The appearance of superconducting, insulating, and ferromagnetic phases in TBG supported on a nearly aligned hBN substrate has made this system even more appealing to study.

The hBN substrate has significant effects on the band structure of TBG even in the case where TBG and hBN are not aligned. Specifically, the substrate induces a large mass gap and strong pseudo-magnetic fields that break the layer degeneracy. Such degeneracy can be recovered with a second hBN layer.

The researchers, in order to achieve more realistic calculations to study the system, develop a full tight-binding model for TBG where the effect of hBN is also included at an atomistic level. The result is a continuum model that correctly describes the TB bands and that takes into account the relaxation effects as well as the effect of hBN.

As a consequence, the explanation of phenomena appearing in TBG either supported on hBN or embedded between two of those layers such as superconductivity, correlated insulators or the recently found ferroelectric phase might only be possible using an atomistic TB calculation or continuum models that describe the electronic properties of such systems accurately.

These results show that a real-space tight-binding model in combination with semi-classical molecular dynamics is a powerful tool to study the electronic properties of moiré heterostructures, and to explain experimental results in which the effect of the substrate plays an important role.

Quantifying the screening of electrons in graphene heterostructures