Discarded electronic devices, such as cell phones, are a fast-growing source of waste. One way to mitigate the problem could be to use components that are made with renewable resources and that are easy to dispose of responsibly. Now, researchers 1 have created disposable papertronics, a prototype circuit board that is made of a sheet of paper with fully integrated electrical components, and that can be burned or left to degrade. 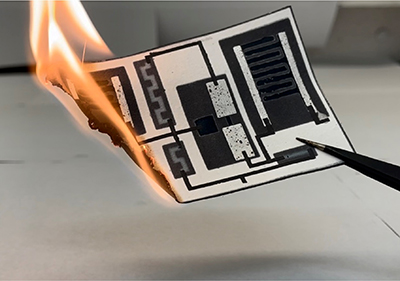 Most small electronic devices contain circuit boards that are made from glass fibers, resins and metal wiring. These boards are not easy to recycle and are relatively bulky, making them undesirable for use in point-of-care medical devices, environmental monitors or personal wearable devices. One alternative is to use paper-based circuit boards, which should be easier to dispose of, less expensive and more flexible. However, current options require specialized paper, or they simply have traditional metal circuitry components mounted onto a sheet of paper. Instead, Choi and colleagues wanted to develop circuitry that would be simple to manufacture and that had all the electronic components fully integrated into the sheet.

The team designed a paper-based amplifier-type circuit that incorporated resistors, capacitors and a transistor. They first used wax to print channels onto a sheet of paper in a simple pattern. After melting the wax so that it soaked into the paper, the team printed semi-conductive and conductive inks, which soaked into the areas not blocked by wax. Then, the researchers screen-printed additional conductive metal components and casted a gel-based electrolyte onto the sheet.

Tests confirmed that the resistor, capacitor and transistor designs performed properly. The final papertronics was very flexible and thin, just like paper, even after adding the components. To demonstrate the degradability of the circuit, the team showed that the entire unit quickly burned to ash after being lit on fire. The researchers say this represents a step toward producing completely disposable electronic devices.