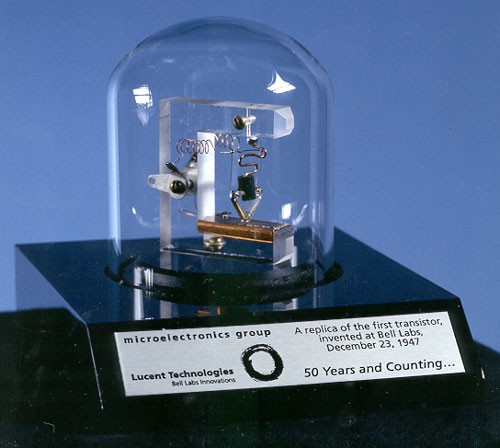 The properties of n-type and p-type semiconductors were well known by the end of World War II, during which considerable research was devoted to electronics and the invention of radar. In 1947 three researchers at Bell Laboratories in New Jersey took the idea of the n-p junction diode a step further. William Shockley, Walter Brattain, and John Bardeen (who, alone of the three, later went on to work on the theory of superconductivity), placed two germanium diodes back to back—an n-p diode next to a p-n diode, each sharing the p-type semiconductor.

They found that the device could be made to contact electricity or to resist, that is, to block, the flow of electricity, depending upon the charge applied to the middle layer of p-type semiconductor. Such a device is therefore called a transistor, since it transmits or resists current depending upon the charge provided to the middle layer. The type of transistor just described is called a n-p-n bipolar transistor. A p-n-p bipolar transistor is also viable. (There is also a different type of transistor construction, known as the “field effect transistor,” which works on the same general principle.)

By the early 1960s, as silicon-based transistors had become smaller, more reliable, and cheaper to make, they began replacing the bulkier and more expensive vacuum tubes previously used for such purposes as amplifying voltages, for instance in stereo sound systems, TVs, and radios, and as switching and logic devices in computers. Shockley, Bardeen, and Brattain received the Nobel Prize in 1956 for an invention that would soon launch the revolution in computer electronics—the transistor. Shockley, based at Stanford University, went on to lay the foundations for the development of Silicon Valley industries in the vicinity of the university. Many of the companies there, including Intel, were founded by people who had originally worked with Shockley.

The revolution in computer electronics was hastened when the need for miniaturized electronic components for space-age missiles helped lead to the development of the integrated circuit. In 1958 Jack Kilby of Texas Instruments developed the idea of integrating transistors and related circuitry on a single silicon chip. A year later, Robert Noyce and Jean Noerni of Fairchild Semiconductor Corporation put the idea into practice by developing the method for integrating the separate elements onto the chip.

In 1970 reduction in the size of integrated circuits was introduced with the first microprocessor, and in 1971 the newly formed Intel Corporation introduced the first integrated microprocessor circuit. Continued advances in microprocessor design and manufacturing techniques enabled the mass production of microprocessors for personal computers, cell phones, automobiles, industrial robots, and even toasters and “talking” dolls. By the early 2000s Intel and its competitors could place as many as 42 million microscopic transistors on a single silicon chip, two centimeters square.