Quantum mechanics is one of the most fruitful and accepted physical theories. Nevertheless, its foundations and philosophical implications are still a vivid topic of debate. Because of that reason, during the conference “Quantum Physics and the Nature of Reality,” held in July 2011 and organized by Anton Zeilinger, a set of experts were polled. A total of 33 people were polled, included physicists (27), mathematicians (3) and philosophers (5), note that multiple answers were allowed. All of them had some expertise in quantum foundations. The results of the poll, together with a statistical analysis, have been recently released 1. Probably, the draft is currently under review and the conclusions might change in the published paper.

The questionnaire consisted in 16 questions with the possibility of multiple answers. One natural conclusion arises from the answers, there is still room for different opinions regarding the implications and applications of quantum mechanical predictions and experiments. In this post we will explain and discuss some of the most interesting questions, and we will summarize some of the conclusions. On the other hand, we really encourage the reader to check Ref [1] in order to see the rest of the questions and the complete statistical analysis.

Question 1: What is your opinion about the randomness of individual quantum events (such as the decay of a radioactive atom)?

From the answers to the question one conclusion is clear: Most of the specialists think that randomness is a fundamental part of nature, and not just a problem with the current theory. No one from the polled thinks that there is a hidden determinism that will allow us to really determine the outcomes of the experiments, and only a 9% thinks that the randomness is only apparent.

Question 2: Do you think that physical objects have their properties well defined prior to and independent of measurement?

Equally important to randomness is the concept of measurement. This is usually illustrated by the thought experiment of Schrödinger’s cat 2. Imagine that you put a cat in a box, together with him there is a radioactive atom, connected to a detector. The atom has a 50% of probabilities of decaying during the next hour, and if it does the detector will activate a mechanism that kills the cat. It is clear that if you open the box after one hour the cat will be dead or alive with 50% of probabilities. But, what happens just before you open the box? Is the cat half alive-half dead or in a definite state?

From the answers to the question it is clear that there is not agreement on this point. More than half of the polled experts (52%) think that physical objects have definite properties independent of measurements but only in some cases, and a considerable number (48%) think that this is never the case. Only a 3% of them thinks that the properties of physical objects are well defined before measuring (please, remember that multiple answers are allowed). 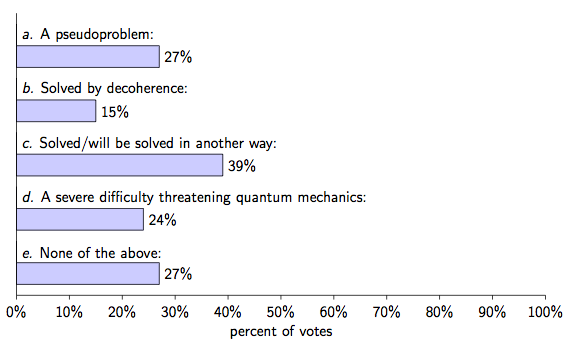 The measurement problem is directly related with the previous question. Coming back to the Schrödinger’s cat example. If the cat is really in a superposition of being dead and alive, how can it happen that when we open the box the state colapse to being alive or dead? This is, basically, the measurement problem.

One of the most popular solutions to this problem is decoherence 3. By this approach, the loss of “quantumness” of the system, that is the jump from multiple states to a single one, happens because of the interaction with the environment. From the results of the poll it is clear that decoherence is not completely accepted as a solution to the measurement problem, as only a 15% of the community thinks it solves it.

Also interesting is the disparity in evaluating the importance of the problem itself. An important share, 27%, do not even consider it a problem at all, but they consider it a “pseudoproblem”. On the other hand, a 24% consider this question as a severe difficulty for quantum mechanics.

Question 7: What about quantum information?

Quantum information is one of the most active fields in physics nowadays. It tries to use quantum properties of systems in order to compute and transmit information. It is clear that it is also considered an important topic for quantum mechanics foundations. Only a 6% of the community thinks that it is not important from a fundamental point of view and another 6% that it is neither fundamental nor useful.

Question 8: When will we have a working and useful quantum computer?

Quantum computers use the rules of quantum mechanics, in order to compute mathematical and physical problems much faster than normal, classical, computers. The actual prototypes have only a few quantum-bits, or qubits, that is quite far from being useful. On the other hand it looks like the experts are optimistic about having a really useful quantum computer in the future. Only a 15% thinks that it will never happen, and a 42% believes that we will have it in less than 25 years.

Question 6: What is your favourite interpretation of quantum mechanics? 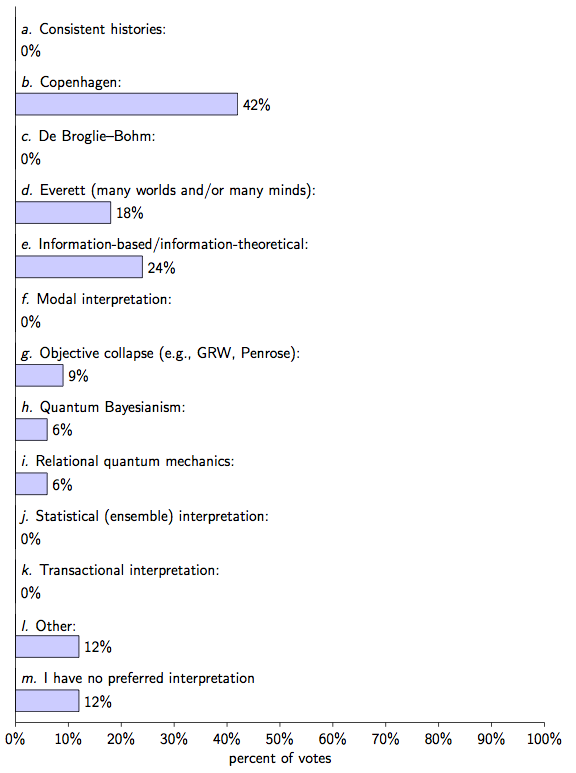 As quantum mechanics has many counterintuitive results, different interpretations of its results have been developed. Explaining them is beyond the scope of this post, but it is clear from the responses to the question that there is absolutely no consensus about what is the best interpretation. Why that happens is strongly related with the next question.

Question 14: How much is the choice of interpretation a matter of personal philosophical prejudice?

So, most of the experts think that the choice of interpretation is a matter of prejudice, and not a scientific choice. That illustrates the strong relationship between quantum mechanics and philosophy.

It is clear that a complex scientific theory with counterintuitive results, as quantum mechanics, gives an important framework for fundamental and philosophical debate. Even, if it is a well established and accepted theory, its results and potential applications can trigger the imagination of scientists and philosophers. Debate is then both interesting and unavoidable.