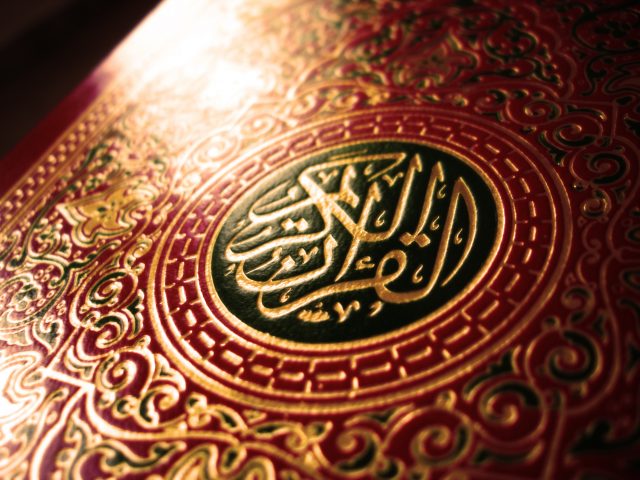 We shall close with this entry our series (I, II, III) about the origins of Islam, indicating some further interesting facts about the Qur’an.

4) By Muhammad’s time, the Arabic alphabet contained no marks for vowels; furthermore, some groups of consonants were written with exactly the same character (e.g., the symbols for sounds b, t, th and n). One century later or so, this problem started to solve thanks to the use of diacritical points, but in the meantime this must have entailed that the first written copies of the suras would probably have been relatively difficult to interpret by their readers (those documents must have served most likely more as an assistance for remembering the text by someone that knew it by heart, than as a useful document for those who didn’t); but as knowledge of the text started to expand geographically and chronologically, more and more people would have had to rely on the written format, as preoccupation about the ‘correct’ edition of the Qur’an by part of the authorities from the middle of the VIIth century onwards demonstrates. This means that occasions for some misreading can have been abundant at least during one century or so. The Islamic tradition recognises this fact in several stories, perhaps legendary but with some historical background. For example, under the reign of Uthman, the third caliph (644-656 CE, 22-35 AH), tradition asserts that a committee was formed to establish a version of the Qur’an as authoritative; several copies of that version were sent to the corners of the new Arab empire, and all the other existing written copies of Muhammad’s recitations were destroyed. This means, obviously, that divergent versions of the Qur’an or of its suras must have existed even by that early time, though the tradition claims that the differences with the orthodox text only amounted to matters of the use of one or other Arabic dialect (the Quraysh dialect of the Meccan region was obviously privileged, as assumed to be the one in which Muhammad himself made the recitations). As a matter of fact, Islamic orthodoxy still accepts today as legitimate ‘the Seven Readings’, i.e., seven various ways of pronouncing the Qur’an text according to dialectal divergences (what makes it suspect that the versions destroyed by Uthman were different from the official one only by mere dialectal reasons). At least two existing Qur’ans are traditionally claimed to be some of the Uthman’s copies: the Topkapi (Istanbul) and the Samarkand (Tashkent, Uzbekistan) manuscripts, but a calligraphic study shows that they cannot date from before the end of the VII century CE. Be that as it may, the truth is that there is no documental proof (only the tradition) of the Qur’an having been codified by Uthman in its present form, since the oldest known manuscripts (with the possible exception of some of the parchments discovered in the Yemeni mosque of Sana’a forty years ago, and still demanding a comprehensive philological and palaeographic study) date from between half a century or one century after Uthman’s death, and what is perhaps more important, the first historical references to the Qur’an as a complete and definitive collection of suras, date also from that time. Remember what we saw in the first entry, that even around 730 CE contemporaries referred to the Islamic sacred texts (the suras) in an individual way, not as forming a single book.

5) The near incomprehensibility of many parts of the Qur’an in a direct reading (, i.e., without the help of an exegesis; see point 2 of the previous post), and the possibility that some letters, words or phrases have been misread by the first Muslims, has stimulated a fistful of ‘alternative’ or ‘revisionist’ theories about the origin and compilation of the sacred book. The most famous of those theories has been the one proposed by the German author Christoph Luxenberg (again, a pseudonym) 1. The revolutionary method employed by him consists in trying first to give sense to the obscure sentences by changing the diacritical points (transforming a word in another, mostly by keeping the consonants and substituting the vowels, but also allowing for some change in the consonants taking into account the similarities between some of them in pre-classical Arabic, as we have just seen). If all admissible combinations still make no sense, Luxenberg considers whether the word might be not from Arabic, but from Syro-Aramaic (which, after all, was at the time the koiné used in the Middle East). Surprisingly, some of the obscure passages seem to make much more sense thanks to this hypothesis. Actually, the very same word Qur’an does come from the Aramaic word queryana (‘lectionary’ or ‘missal’, i.e., a Christian prayer book), and is originally more appropriate for a collection of texts prepared for being read (‘recited’) at religious ceremonies than for a collection of oral speeches (though, of course, it has taken this latter meaning in classical Arabic). Luxenberg tries to show that many of the suras, or parts of them, are probably translations-cum-modification of (non-orthodox, perhaps monophysite) Christian religious texts used by some of the numerous Christian communities existing by the VIth and VIIth centuries in what today are Palestine, Jordan, Syria and Arabia. For example, he argues that sura 97 (‘the Destiny’ o ‘the Night of Power’) would really be an allusion to the festivity of Christmas. But most famous due to its reception in the media has been the hypothesis that the huris-of-wide-eyes mentioned several times in the Koran as the young females waiting in the Paradise for the martyrs of the jihad, were, in fact, a transliteration of the Aramaic word for brunches of white grapes, which is an interpretation that fits better with the rest of the text in which the word appears. Luxenberg’s claims, however, have been received with scepticism even by many Western Qur’an scholars 2, for lacking philological systematicity and historical references to the cultural and political contexts of the time. They, nevertheless, are to be examined one by one according to the evidence. It would not come as a surprise, however, to experts in the history of culture, that some or many of the textual content of the Qur’an were by some direct or indirect way derived from the Christian or Judean milieu pre-existing in many of the human communities of VIth century Arabia and surroundings, exactly as some of the narrative content of many suras is about Biblical characters, as we saw in the past entry. Unfortunately, only the discovery of more manuscripts coming from that time could serve to scientifically settle this fundamental question.

History and legend in the origins of Islam (I)

History and legend in the origins of Islam (II)