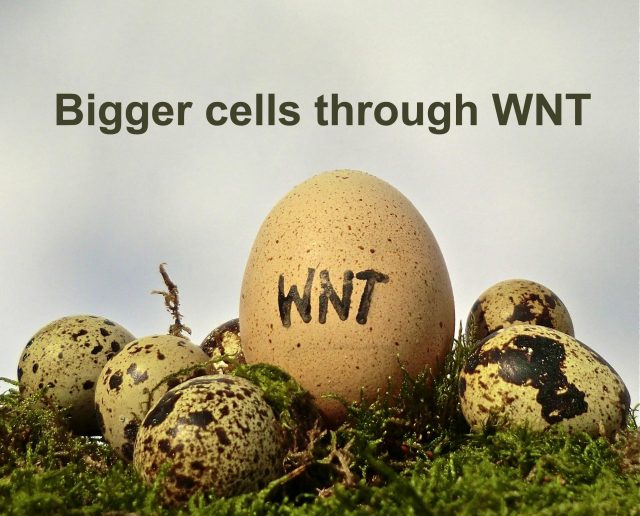 A human body harbors around 37 trillion [1012] cells 1 that came from a single fertilized egg by a process known as mitotic division or mitosis. While the first cellular divisions of an embryo occur without gaining mass, most of the following ones are linked to cell growth and are required for the correct development and homeostasis of our organs. In general, dividing cells need to replicate their DNA and grow up to double the amount of proteins and other key components in order to create two daughter cells. These events are organized during the time between divisions, which is referred as cell cycle. However, the cellular mechanisms that couple cell cycle progression with cell growth are not fully understood.

In our organs, the cellular divisions are tightly regulated in order to maintain the tissue homeostasis. If the division rate is too low the damaged cells are not replaced and the organ is consumed. On the other hand, too many divisions can lead to tumors. To keep a proper balance cells communicate with their neighbors using secreted hormones and proteins that travel in short or long ranges and inform of their status. These cues activate specific signaling cascades inside the cells that ultimately control their fate.

The WNT signaling pathway is one of the most studied signaling cascades that regulate tissue homeostasis. It is well established that WNT signaling induces the transcription of a myriad of genes, often in a context-dependent manner, to promote cell fate during embryogenesis and tissue homeostasis. In general this cascade is mitogenic, which means that promotes cell proliferation, for example, by upregulating the transcription of MYC.

Our group found few years ago that WNT signaling activation is strongly induced during mitosis2. Interestingly, gene transcription is shut down in this phase as chromosomes condense to be segregated to the daughter cells, suggesting that this mitotic WNT signaling could have different functions that the classical upregulation of target genes. Indeed, data from Kikuchi and colleagues 3, as well as Nusse and colleagues 4, supported a non-transcriptional role of WNT signaling during mitosis by modulating chromosome segregation.

We recently have described that WNT signaling has yet another role in mitosis by slowing down protein degradation and thereby increasing the cell size of daughter cells 5. Thereby WNT signaling couples cell growth with cell division independently of its transcriptional and canonical roles.

Previously, De Robertis and colleagues proposed that WNT signaling regulates the stability of many cellular proteins by sequestering the enzyme GSK3, a pivotal modulator of protein catabolism 67. As described in Acebron et al , we analyzed several GSK3-target proteins through the cell cycle in cultured cells and found that they are stabilized prior division (G2 and mitosis) upon activation of the WNT signaling pathway. Among these proteins was MYC, which is known to be sufficient to drive tumorigenesis in certain tissues. Moreover to find novel GSK3 targets we used protein arrays that contain ~1/3 of the human proteome. We found that ~14% of all arrayed proteins that were targeted to degradation in vitro (i.e. polyubiquitination) where indeed modulated by GSK3. It has been proposed upon bioinformatic analyses that up to 20% of the proteome could be under GSK3 control [6]. Taken together these evidences lead us to analyze global effects of WNT signaling in the cellular proteome.

We analyzed the protein content of cells to unravel which fraction of the proteome is under WNT control and found that mitotic cells in which WNT signaling is active harbor ~15% more proteins than control cells. These data suggest that daughters of cells in which WNT signaling was active will inherit more proteins, which could be an important advantage for cell growth and cell cycle progression. Indeed, analyses of daughter cells (G1 phase of the cell cycle) revealed that WNT induces a substantial increase in cell size in many different cell types, ranging from untransformed cells to tumor-derived cells. Importantly both protein content and cell size could be reverted by blocking key components of the pathway that function upstream or at the level of GSK3; and occur independently of gene transcription or translation. We referred to this novel mode of WNT signaling at mitosis as WNT-dependent stabilization of proteins (Wnt/STOP) and proposed that it provides an important growth advantage to dividing cells.

WNT signaling regulates tissue homeostasis in many organs, and therefore mutations in key components of this pathway often lead to disease, notably cancer. Currently most of the efforts to treat WNT-associated tumors focus on the transcriptional branch of the pathway. To investigate if our study on cell growth could be relevant in the context of cancer cells we analyzed Non-small-cell lung cancer (NSCLC)-derived cells and colon cancer-derived cells. These cells contain activating mutations of the WNT signaling pathway that impair a proper modulation of target genes. However, even with those mutations the growth of these cancer cells was reduced upon the inhibition of the Wnt/STOP branch, suggesting novel opportunities for pharmacological intervention.

Raw Science: How many animals are used in your lifetime?

Growing hamburgers on a petri dish

Growing old together; are your bacterial partners making you old?